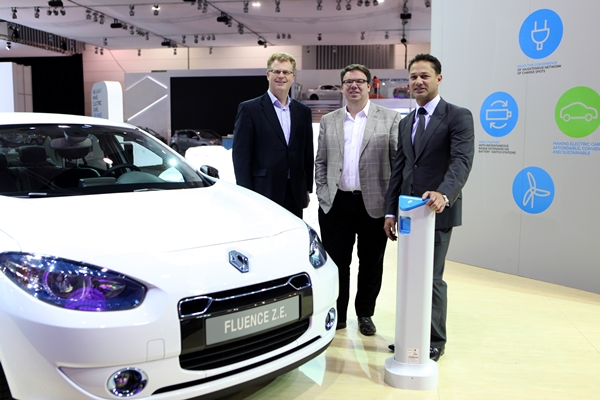 AIMS 2011 is all about envirocars and Better Place is an example. Better Place, GE and Renault Australia today joined together at the Australian International Motor Show (AIMS) with a series of announcements that demonstrate a strategic move to make electric cars a mass market reality for all Australians and help address the nation’s sustainable transport challenge.

“We make technology that touches every point of the electric vehicle infrastructure, and we are embracing the transformation with partners like Better Place, with whom we have signed a local Memorandum of Understanding in extension of our global partnership announced last year. Together Better Place and GE aim to move electric vehicles from anticipation to action. We look forward to being an early adopter of electric vehicles in this country”, Mr Waters said.

At the same time, Justin Hocevar, Managing Director of Renault Australia, unveiled the first Fluence Z.E. ever to be seen in Australia. The Fluence Z.E. is the world’s first electric car with unlimited range due to innovative battery switching technology.

“Renault Australia is proud to be able to reveal the Fluence Z.E. sedan at AIMS today. This is a major milestone for Renault in Australia, as well as for the future of motoring here. Our parent company, Renault S.A., has been working closely with Better Place for some time to make battery switch technology a reality in order that we may provide unlimited driving possibilities with zero emissions. The combination of the five-seat, family-friendly Renault Fluence Z.E. and the Better Place charge spot network and battery switch stations brings electric motoring within the reach of a large proportion of the Australian driving public, and at an affordable price,” said Justin Hocevar, Managing Director of Renault Australia.

“Today’s statement from GE and the unveiling of the Fluence Z.E. are the culmination of a range of announcements over the past few weeks that clearly show that the transition to mass-market electric cars is beginning in Australia”, said Mr Evan Thornley, CEO of Better Place Australia.

“Better Place has announced a national rollout of our charge network, powered by 100% renewable energy. Two weeks ago Renault announced it would bring the Fluence Z.E., the first electric car with unlimited range, to Australia. Earlier this week GE announced it was joining EV Engineering Limited, a project designed to advance Australian electric car engineering and including leading partners such as Air International, Bosch, Continental and Futuris. Now GE is announcing it will purchase at least 1000 electric cars in Australia by 2015. It is clear that the transition to electric vehicles in Australia has momentum, and it is accelerating.

“Zero-emissions electric cars are now a real choice for Australians as we begin the mass transition from petrol to electric, with appealing cars and a comprehensive charge network that delivers convenience and affordability to customers that is equal to or better than petrol.

“The economic fundamentals make the move to electric inevitable. As petrol prices continue to rise over time and battery prices continue to fall, this compelling logic will accelerate the transition to zero-emissions electric cars on Australian roads.

“The transition begins with Better Place’s national charge network rollout which starts from Canberra later this year. From the middle of 2012 the first mass market cars with unlimited range, the Renault Fluence Z.E., arrive on our shores. A progressive national infrastructure rollout will give Australia the largest electric car charging network anywhere in the world by the end of 2013.

“We are excited to be partnering with GE and Renault, two companies who are leading the world in their commitment to zero emissions driving. Together, Better Place, GE and Renault will make electric vehicles a driving force in this country.

“The local teams at Better Place, GE and Renault are working together to push Australia to the front of the global transition to electric mobility. Australia is the single most exciting prospect for the profound transformation of sustainable transport and we are delighted to be leading the charge”, Evan Thornley said.

There was once a time when improvements to cars obviously had to come from the existing car industry and be first reported in motoring magazines. But now other manufactures and reporting avenues are getting into the act. [Read More]