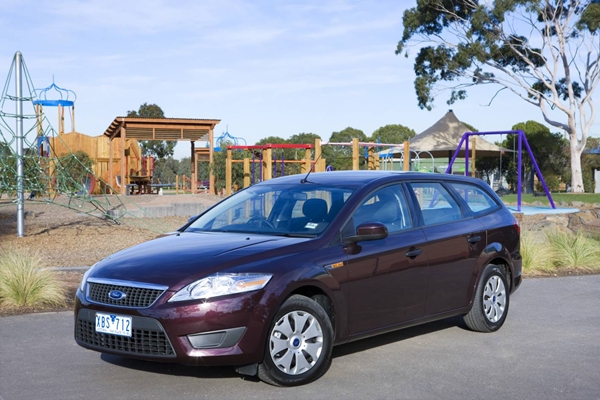 Before the popularity of the people mover and back in the days when four-wheel-drives were rugged trucks, large families used to get around in station wagons. A lot still do.
The Ford Mondeo LX Diesel 6 speed Auto is one of the better options:

Behind the wheel
The interior looks good and is easy to use. Buttons on the steering wheel controls some of the functions and you scroll through menus in the same way you would on a mobile phone. Ford calls this the HMI system – or Human Machine Interface and it’s fairly intuitive to use. The seat adjusts every which way, so it’s easy to get a good, supportive driving positing while forward visibility is good. On the 2010 model refresh, the Mondeo has had a little nip/tuck on the interior. The most striking design tweak is that the central console is now one piece; the plastics feel softer and are of a higher quality. 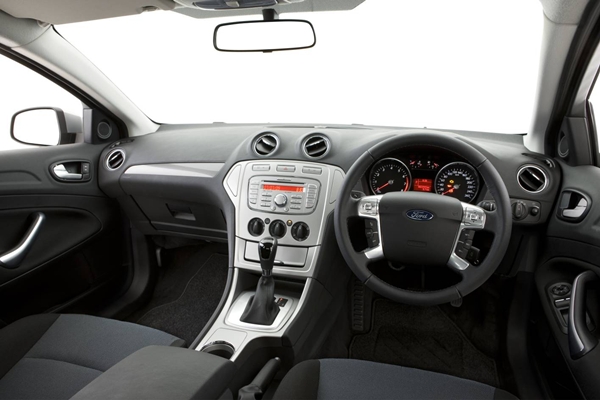 Performance
A broad range of engines should satisfy anyone needing a large wagon with frugal diesel and petrol engines, however, if you want bang for your buck, the 2.0-litre Duratorq TDCi diesel engine produces an impressive 120kW of power and 340Nm of torque and is a superb engine with a huge reserve of pulling power. This high-efficiency TDCi diesel engine is matched with an advanced Power Shift 6-speed dual-clutch automatic transmission.

This transmission is a state-of-the-art dual-clutch design that is significantly more efficient than traditional torque-converter automatics, resulting in fuel economy and CO2 emissions, which are typically reduced by 8-10 per cent. The result is impressive – Ford PowerShift provides the ease and convenience of a conventional automatic transmission, coupled with the performance of a manual, while also delivering fast, sporty and notably smooth shifts.

Handling
The Mondeo is both comfortable and agile for a large wagon. Its steering feel sets it apart from most cars of its type and the Ford reacts intuitively to the driver’s inputs. As a result it always feels composed on twisty roads with excellent body control and good levels of grip. In practice, this set-up will be ideal for most drivers.

Comfort
Comfort is one of Mondeo’s great strengths. The car has grown in both width and length and as a result there’s lots of room for two or three in the back. Legroom is impressive and the middle seat is adequate for short trips. The seats are supportive and a good shape, although the sloping shape of the roof restricts headroom, however on the move – and especially on the motorway – it’s very quiet.

Wind and road noise are well suppressed and engine noise is only noticeable under hard acceleration. It means that the Mondeo is well equipped for long distance driving. It also has a great feature in the Hill Launch Assist, where Mondeo variants fitted with the new TDCi diesel engine and PowerShift transmission will also be equipped with Hill Launch Assist (HLA) as part of an enhanced Dynamic Stability Control (DSC) system. Using the braking system, HLA is engaged when the car is stationary to prevent it from rolling. Effective on both uphill and downhill gradients, HLA provides a 2.5 second delay when the driver moves their foot from the brake pedal to the accelerator pedal, as the system maintains pressure to the braking system. 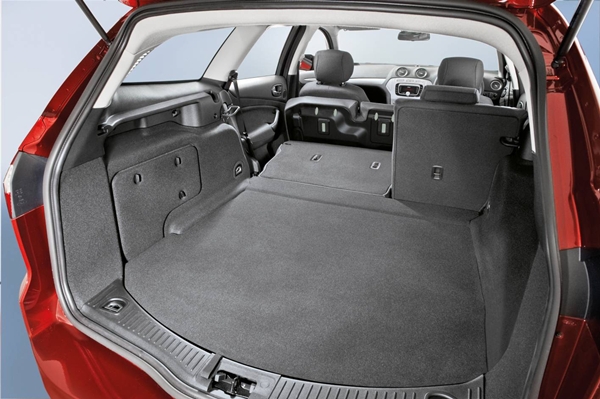 Practicality
The Mondeo estate’s boot space is bigger than in the previous version of the car, with a minimum of 542 litres up to the window level. With the rear seats folded there is a huge 1733 litres of space available up to roof height so it really is cavernous, with a huge square opening and the absence of a boot lip makes it easy to load large or heavy objects. A load protection net is an optional extra, as is a sliding loading floor, but both are well worth the extra if you frequently use the boot space.

The most ingenious feature is one of the simplest – the fuel filler. Not only does the Mondeo do away with a conventional cap (it’s fixed permanently to the flap, which means you don’t get petrol or diesel on your hands), but it’s impossible to fill it with the wrong fuel – it will only allow the right nozzle into the fuel pipe, so you won’t become one of the thousands of people who each year mis-fuel their car.

Equipment
To the uninitiated, the Mondeo wagon line-up can be a little confusing as it’s not that obvious which trims are the basic ones and which are the top of the range. It starts with LX and moves through Zetec and Titanium. The Mondeo LX which we lived with for the past week, offers impressive levels of features and safety equipment including seven airbags, including a driver’s knee airbag and full length side curtain airbags. rain sensing wipers, front and rear parking sensors, dual-zone climate control, cruise control and a leather wrapped steering wheel.

Safety
The Mondeo hatchback gained a five-star Euro NCAP crash test rating and a place among the safest cars you can buy so it’s no surprise that the level of safety equipment is impressive. Electronic Stability Programme (ESP) is standard on every car plus there are also seatbelt pre-tensioners, dual front, side, curtain and knee airbags, a collapsible steering column and ABS. Keyless entry is available on some models too – this means you can leave the key in a pocket or bag and the car will sense you approach and unlock the car. After that it’s just a case of pressing a button on the dash to start the engine. The Mondeo trumps the homegrown Commodore wagons with adjustable headrests for all three rear-seat occupants compared with the Commodore. 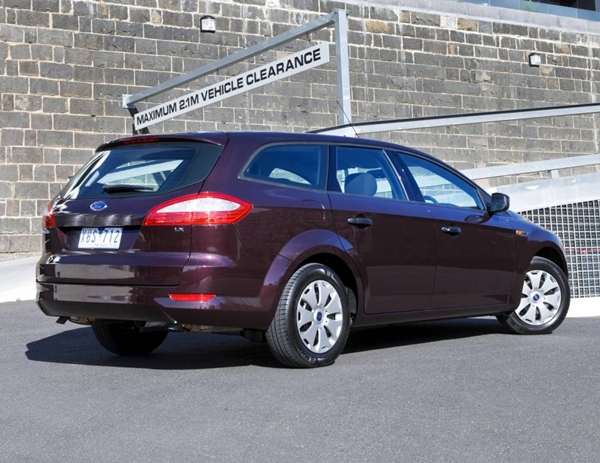 Summary
Built in Belgium Ford produces the mid-sized Mondeo in the town of Genk. The Mondeo’s reputation as one of the best load-lugging wagons continues with the 2010 model. Elegant styling disguises even greater carrying capacity than before while the quality feel of the interior has been improved substantially with top grade materials and soft touch plastics. Despite the increase in size and weight it’s as good to drive as the hatchback version and looks just as good.

Perhaps the only problem is the confusion stemming from whether an LX is better than a Zetec or better than a Titanium. In 2010 the Mondeo has received a little cosmetic surgery, the most noticeable part of this refresh it the new nose job. The front-end has had a complete overhaul; this includes an enlarged lower grille and a smaller upper grille, while the rear receives new LED taillights, an all-new bumper, a reshaped valance and an integrated rear spoiler. The interior has also had a little nip/tuck. There is now a one-piece central console, it is soft to touch and the plastics are of a higher quality. The new Mondeo has its German rivals in its sights, but in Australia it has the Commodore Sports Wagon in its cross hairs and if you choose the diesel, it’s a clean one shot one kill. 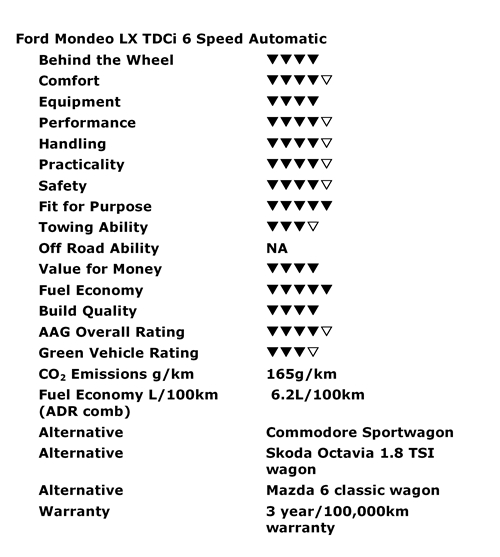