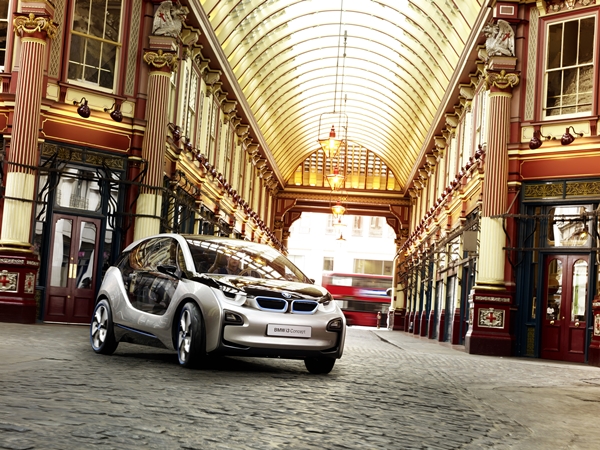 The BMW Group will launch an electrically powered production vehicle this year with the BMW i3, which represents a new form of sustainable mobility in urban areas. As the first premium electric vehicle, the BMW i3 rises to the social, ecological and economic challenges of our time. With its groundbreaking new vehicle architecture, the concept calls for the use of modern lightweight construction materials as well as innovative production processes.

Sustainability plays a prominent role for the BMW Group in this area also. The BMW i3 was the first vehicle project for which sustainability objectives were agreed that were pursued with the same vigour as cost, weight or quality objectives. The aim is also to reduce the environmental impact of production as much as possible, focusing on aspects such as energy supply and water consumption, solvent emissions and waste treatment.

Even for the manufacture and processing of carbon fibre-reinforced plastic (CFRP), BMW attaches the utmost importance to conservation of the environment and resources, and the use of a renewably generated power supply where possible. The BMW Group therefore has control over all process steps, from fibre production to the recycling of fibres and composites. This is illustrated particularly well by the ultramodern CFRP production chain, which starts in Moses Lake in the U.S. and passes to Germany in Wackersdorf and Landshut and on to final manufacturing in Leipzig. In Moses Lake, for example, the required electricity is generated in an environmentally friendly way from 100 per cent hydroelectric power, while at the Leipzig works the entire electricity requirement is met using self-generated wind power.

BMW works in Leipzig: 100 per cent of electricity generated by wind power.

The BMW works in Leipzig is unique in a number of ways. The power required for production is generated directly on site by wind power. In fact, the four wind power systems installed on the works grounds generate more electricity than is needed to manufacture the BMW i models in Leipzig. In addition to the CO2-free power supply, the works sets other records: compared with the already highly efficient BMW production average, a further 50 per cent energy and 70 per cent water were saved in BMW i manufacture.

In the BMW works in Leipzig, series production of the BMW i3 is setting new standards, and not just in environmental protection. The use of carbon components is unique in automotive mass production because large-scale use of CFRP was previously considered too expensive, and processing and manufacture too complex and insufficiently flexible. However, after over ten years of intensive research and optimisation of processes, materials, systems and tools, the BMW Group is the only automobile manufacturer to have the necessary expertise to use CFRP in mass production. The process is unique, and the cycle times unusually short even for complex CFRP components. The same is true for the proprietary bonding techniques developed in-house, which are used to bond the individual components together in the bodyshop in a fully automated process.

In the course of developing the BMW i, the BMW Group eventually devised the first recycling concept of its kind worldwide for CFRP components, body parts and sorted production waste that was suitable for series production. The valuable recyclable materials are reused in different processes and channelled back into the production process or used in other applications in order to save valuable resources. BMW has even devised useful repurposing for scrapped batteries.

E-mobility: the road is clear.

With a range of up to 160 kilometres, the BMW i3 meets the mobility demands of its users in urban areas. Charging is extremely simple and is possible at home, at work or at public charging stations. In addition, BMW i offers a comprehensive range of products and services under the 360° ELECTRIC label that meets individual customer needs. BMW i is also exerting great pressure together with different partners to advance the expansion of the public charging infrastructure, including convenient reservation and payment systems.

It goes without saying that the reliability and safety of electrical components are very important to the BMW Group. It is good to know that the lithium ion battery of the BMW i3 lasts at least the full lifetime of a vehicle. This is achieved through intelligent battery management and an effective heating/cooling system developed by BMW, for example. Like all BMW vehicles, the BMW i3 also meets the company’s strict demands, which exceed the statutory requirements.

Ease of service and repair to a renowned standard.

Even in the highly unlikely event of a fault, defective components can be identified, and individual modules or the entire battery replaced. The same applies to damage caused to the body resulting from an accident, as ease of repair was high on the list of technical specifications for the BMW i3 even during its design phase. BMW therefore developed time-saving repair methods specially for the plastic panelling and CFRP components of the BMW i3. As a result, all of the accident repair costs are similar to those of a BMW 1-Series

April 29, 2022 David Brown ENVIROCAR Guide, Motoring Minute, News Comments Off on Vehicle sale numbers – Tesla and Polestar and in there and counting

The Federal Chamber of Automotive industries aims to represent the collective view of car companies in Australia. But for some time, Tesla has not been a member [Read More]

MMC announced today that later this year at the 2012 Paris Motor Show* (“Mondial de l’Automobile*), Mitsubishi Motors will continue its roll out of ambitious, global and green new product generation, with a series of significant premieres. The highlight of this offensive will be the world introduction of the all-new Outlander Plug-in Hybrid EV. [Read More]