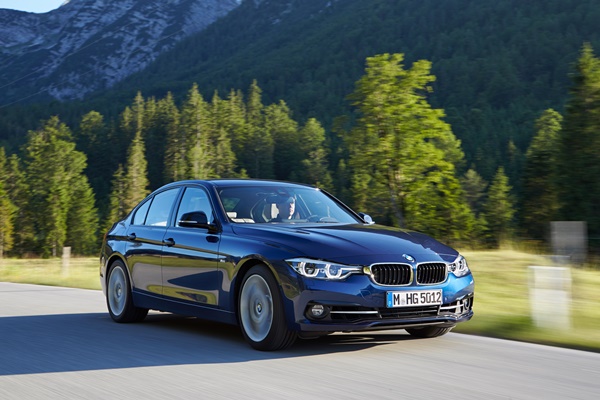 BMW Group Australia has unveiled pricing and specification for the new BMW 3 Series Sedan and Touring ahead of its local market launch in October this year.

With improved driving dynamics, sharper steering and a superior ride, the latest iteration of the iconic vehicle marks the arrival of new model designations, together with some familiar favourites.  The new line-up is as follows:

Adaptive M Suspension is included from the showroom floor in the 320i Sedan and Touring onwards, enabling the driver to adjust suspension settings to suit their particular driving style.

The interior has also been upgraded, emphasising its premium ambience with chrome accents around the air vents, controls and trims, a new high-gloss centre stack with ambient light surround and dual-zone air conditioning display, depending on equipment line included.

The world’s most successful model series in the premium segment, with more than 14 million models sold worldwide, the BMW 3 Series remains undisputed holder of the title as the manufacturer’s all-time leading seller.

This equates to approximately 25 per cent of all BMW sales across the globe.

And the success story has continued in Australia, particularly in recent times, with over 80,000 examples sold since the turn of the millennium, adding another triumph to the 40-year history of the BMW 3 Series.

BMW Group Australia Head of Product and Market Planning, Shawn Ticehurst, highlighted the ongoing importance of the 3 Series to the BMW range.

“The latest BMW 3 Series will make its mark by virtue of its improved performance, specification levels and technology,” Ticehurst said. “The 3 Series remains the most successful model in our current product range, proving the enduring reputation of its concept.”

Ticehurst added: “This latest model, which arrives as we celebrate 40 years of the BMW 3 Series, introduces exciting changes inside and out across the range, with extensive levels of technology and innovation.

“With boosts in power and standard equipment, the new BMW 330i Sedan and Touring and 340i Sedan deliver premium motoring with sporting intent, while the attractively priced and highly specified 318i is a clear drawcard, marking the comeback of a popular name.”

The first ever BMW 3 Series powered by a 1.5 litre, three-cylinder BMW TwinPower Turbo engine, the new BMW 318i Sedan produces the same levels of power as the model it replaces, the BMW 316i, but receives improvements in sprint performance, fuel economy and a reduction in emissions.

The achievement of recording a nine per cent reduction in fuel consumption and carbon dioxide emissions, while simultaneously enhancing performance, highlights the ambition and engineering philosophy underpinning BMW EfficientDynamics.

An extensive list of standard equipment, including Sport Line, accompanies the mechanical advances, with innovation and technology at the fore, fuelling the comeback of the BMW 318i.

Dakota leather upholstery is now included as standard with Luxury Line, which is a cost option on the 318i Sedan, 320i Sedan and Touring and 320d Sedan models.

The BMW 318i is due to arrive in Australia during November this year.

The BMW 320i, available from $61,900* as a Sedan or $65,300* in Touring form is equipped with further equipment over the 318i, with an eight-speed sport automatic transmission, lights package, electric seat with memory function, Adaptive M Suspension and DAB+ Digital Radio additions to standard specification.

Featuring a 2.0 litre, four-cylinder BMW TwinPower Turbo engine, the BMW 320i Sedan and Touring records power figures of 135kW and 270Nm, and accelerates to 100km/h in 7.3 and 7.5 seconds respectively.

Replacing the volume selling BMW 328i which has accounted for nearly 40 per cent of all 3 Series sales 2015 year to date, the 330i Sedan and Touring builds on the success of its predecessors, pairing greater levels of specification with heightened output, and is priced from $69,900* and $73,300* respectively.

19-inch alloy wheels, navigation system professional, leather upholstery and comfort access are among the additions in specification over its smaller capacity siblings, neatly placing the model to continue its reign as the most popular 3 Series in the range.

A revised nameplate signals an uplift in performance, with the new 2.0 litre, four-cylinder BMW TwinPower Turbo engine from the BMW EfficientDynamics range, now producing 185kW of power, while torque remains poised at 350Nm.

Translated to the tarmac, the 330i now sprints from 0-100km/h in 5.8 seconds, while nine and eight per cent improvements in fuel consumption and carbon dioxide emissions demonstrate further engineering advances.

Sport Line and Luxury Line are no cost options, providing drivers with the opportunity to tailor the character of their BMW 330i Sedan or Touring.

Leading the range is the halo BMW 340i Sedan, which in replacing the 335i, is priced at a revised $89,900 and totes a full cache of equipment, as well as performance figures flagging the model as the supreme athlete of the 3 Series range.

Fuel consumption improves to 6.8 litres per 100 kilometres, and carbon emissions reduced to 159 grams per kilometre.

Showcasing the ultimate array of 3 Series innovation and technology, the net increase in specification over the BMW 330i is substantial, as demonstrated by the lengthy list of standard features.

Heading the chart of base equipment is the M Sport package, which is optioned in over 50 per cent of 3 Series models sold this year, and features an M Aerodynamics kit and a leather M Sport steering wheel among other inclusions.

Luxury and comfort come to the fore in the form of a BMW Individual instrument panel finished in leather, heated front seats, lumbar support, variable sport steering and roller sunblinds for rear and rear side windows.

The eight-speed sport automatic transmission is standard, while drivers craving a direct driving experience can opt for a manual transmission at no-cost, while Luxury Line is also available in place of the M Sport package.

The BSI plan provides a long-term solution enabling cover to be extended and transferred to future vehicle owners before expiry.

Net specification over 318i

* Manufacturer’s Recommended List Price is shown and includes GST and Luxury Car Tax (LCT) – if applicable, but excludes dealer charges, stamp duty, statutory charges and on-road charges, which are additional and vary between dealers and States/Territories. Customers are advised to contact their nearest BMW dealer for all pricing inquiries.

Audi bestselling SUV in Australia is the Q5 and fresh on the recent updates is the upcoming release of two new models. The Q5 Sportback and SQ5 Sportback. [Read More]

The all-new TT Roadster has arrived in Australia. The new TT Roadster offers a fresh design and advanced technology in the all-new model, but its sporting ability really sets it apart from its predecessor – and the competition. [Read More]