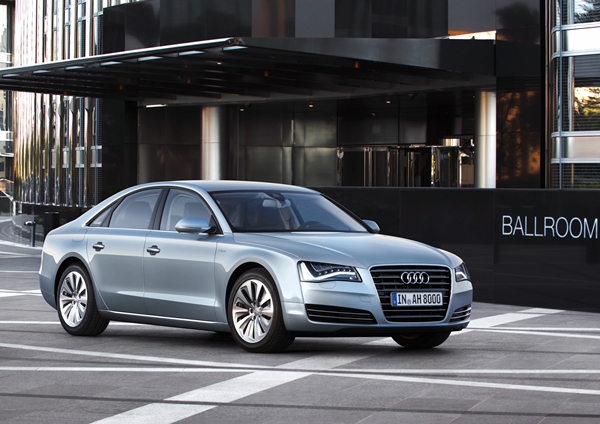 Combining the power of a six-cylinder model with the fuel consumption of a four-cylinder version, Audi’s brand new A8 Hybrid model will start series production in 2012.

Its gasoline engine – a 2.0 TFSI – together with the electric motor will develop peak output of 180 kW (245 hp) and 480 Nm of torque. Average fuel consumption is below 6.4 litres per 100 km. The sedan can travel at speeds of up to 100 km/h on electric power alone, and cover around three kilometres with zero local emissions at a constant speed of 60 km/h.

The Audi flagship model is designed as a highly efficient parallel hybrid. The 2.0 TFSI, which has been modified in some areas, generates an output of 155 kW and 350 Nm of torque, which is available between 1,500 and 4,200 rpm. The combustion engine works together with a disc-shaped electric motor which develops 40 kW and 210 Nm.

The permanent magnet synchronous motor is mounted in the space usually occupied by the torque converter in front of the modified eight-speed tiptronic. A multi-plate clutch that operates in an oil bath connects or disconnects the electric motor and the TFSI engine. The clutch operates ultra-precisely and gently in all situations. The highly comfortable and fast-shifting hybrid transmission guides the torque to the front wheels; with its wide gear spread it contributes to the efficiency of the Audi A8 hybrid.

The short-term system output of 180 kW (245 hp) and the system torque of 480 Nm ensure highly agile performance. The Audi A8 hybrid reaches 100 km/h in 7.7 seconds from a standing start and has a top speed of 235 km/h. Its fuel consumption in the EU cycle is less than 6.4 litres per 100 km, and CO2 emissions are below 148 grams per km. Please note that all figures are provisional. 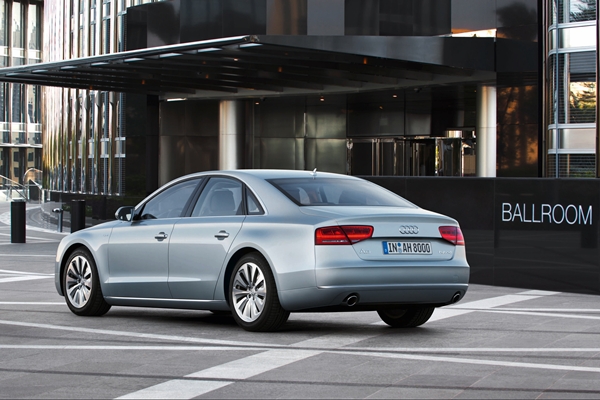 The Audi A8 hybrid can drive at up to 100 km/h purely on electric power and has a range of up to three kilometres at a constant 60 km/h. This gives the driver the choice of three modes: The EV characteristic map gives priority to the electric drive, while the D mode efficiently controls both the engine and the electric motor. The S mode and the tiptronic gate are designed for a sporty driving style. The hybrid sedan has five operating states: with the TFSI engine alone, with electric drive only or in hybrid mode; recuperation and boosting are also possible. Two displays show the driver all operating modes in detail.

The lithium-ion battery, which weighs 36.7 kilograms, is located in a crash-proof area in the trunk. It provides 1.3 kWh of nominal energy and up to 40 kW of power. Two different methods are used to air-cool the battery, depending on need: with air blown from the passenger compartment by a fan and via a separate cooling circuit coupled to the automatic air conditioning system. The battery is thus kept within the temperature window required for it to perform to its full potential over a wide range. The electric motor and the compact power electronics which serve as a controller between the electric motor and the battery are water-cooled.

In visual terms, the Audi A8 hybrid is distinguished by subtle details. The ten spokes of its alloy wheels – which have a diameter of 18 inches as standard and 19 inches as an option – are reminiscent of turbine blades. The body features hybrid badges, and Arctic Silver is available as an exclusive paint finish. The metallic paint finish, threezone automatic air conditioning, LED headlights and the BOSE sound system come standard.

Thanks to the brand’s ultra-lightweight construction expertise, the Audi A8 hybrid will be one of the lightest sedans in its category. Its ASF (Audi Space Frame) body is made entirely of aluminum, while the B-pillars are of hot-shaped, ultra-highstrength steel. Weighing just 231 kilograms, it is roughly 40 percent lighter than a comparable steel construction.

Tesla fans have been waiting for Model 3 for some time. David Brown says that the long wait might be over. Tesla says buyers who paid a $1,500 deposit more than 3 years ago will get first priority [Read More]

The XL1 by Volkswagen is the most efficient production car in the world with a fuel consumption of 0.9 l/100km. Thanks to its plug-in hybrid system, the two-seater can also be driven for up to 50 kilometres locally in pure electric mode, [Read More]