Peugeot’s 5008 brings a little character and French flair to a segment that can appear a little homogenised. Heralding a return for the once popular French manufacturer with an illustrious history in Australia. The 5008, relaunched in early 2018, and benefiting from several important upgrades since, continues the revitalisation of the brand.

Peugeot’s long travel and compliant suspension, is revered as being able to help tame the wilds of our outback roads. Winning the first Redex Rally in the early 1950’s (and a number of others that followed) Peugeot built a solid reputation. Then damaged it in recent years.

The latest version of the all-new 5008 is, thankfully, nothing like its namesake MPV predecessor. In fact it is almost everything that model wasn’t. In short it’s actually really good. We are testing the GT Line here. 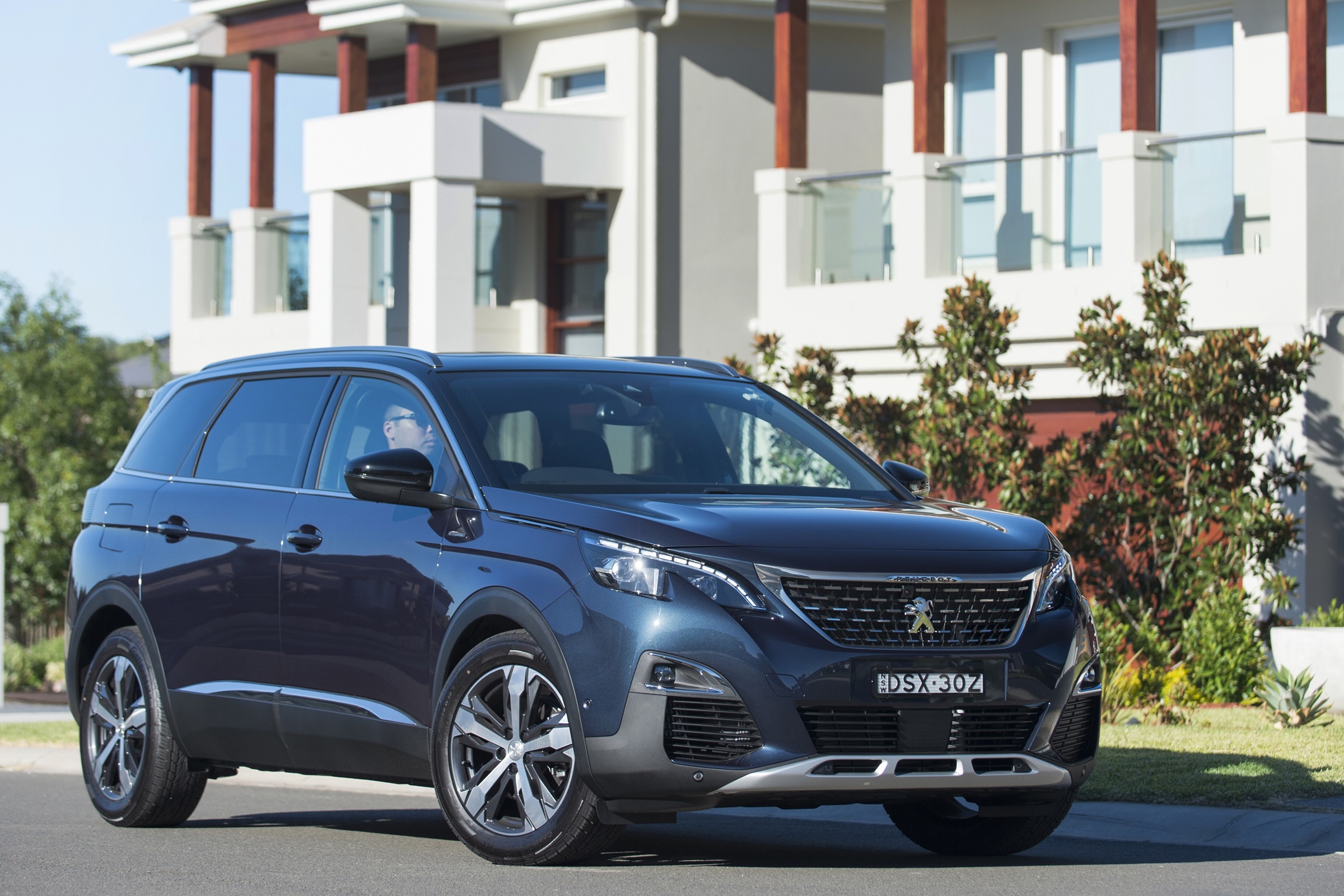 Peugeot has created the 5008 in an unusual style. It really is different to the typical AWD SUV style in that it has a combination of sleek style and boxy elements. On the original launch I coined the phrase “sleek boxy” and that still fits. The interesting thing about the design is that although it is quite boxy at the rear, aiding in the cavernous and flexible boot and third row seat area, it still manages to maintain a sleek profile. From the front it is unmistakably a Peugeot. The bold grill has the Peugeot Lion front and centre.

There are chrome and black headlamps incorporating LED Daytime Running Lights, longitudinal, profiled aluminium roof bars, chrome highlights for the glass house and black lower wheel guards which both add to the vehicles’ SUV stance and protect the bodywork from any damage from light off-road work. The GT models add some detail features. 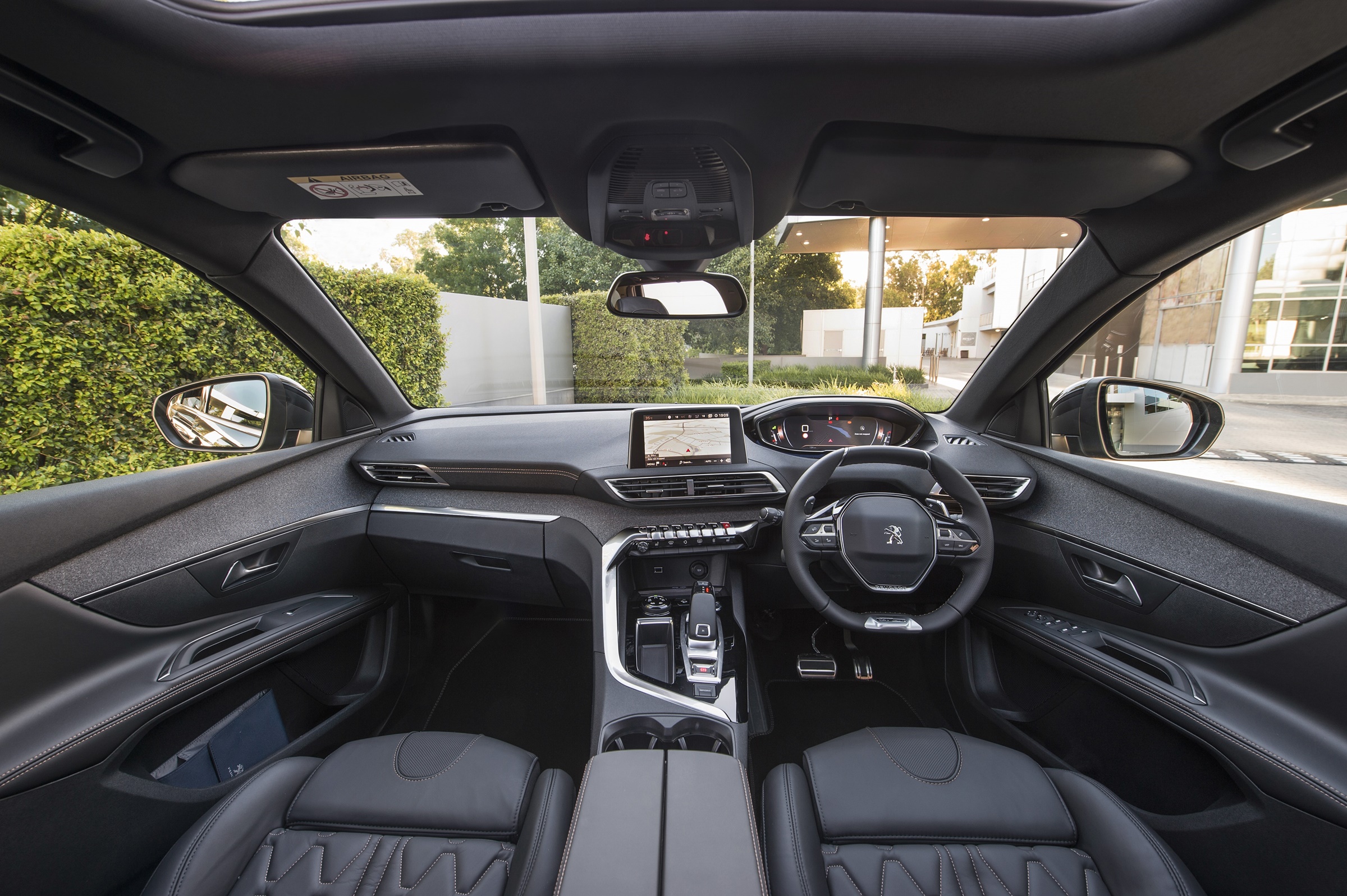 The French have a definite quirkiness and flair to their designs. That continues internally. The GT Line with I cockpit design, looks sumptuous inside. 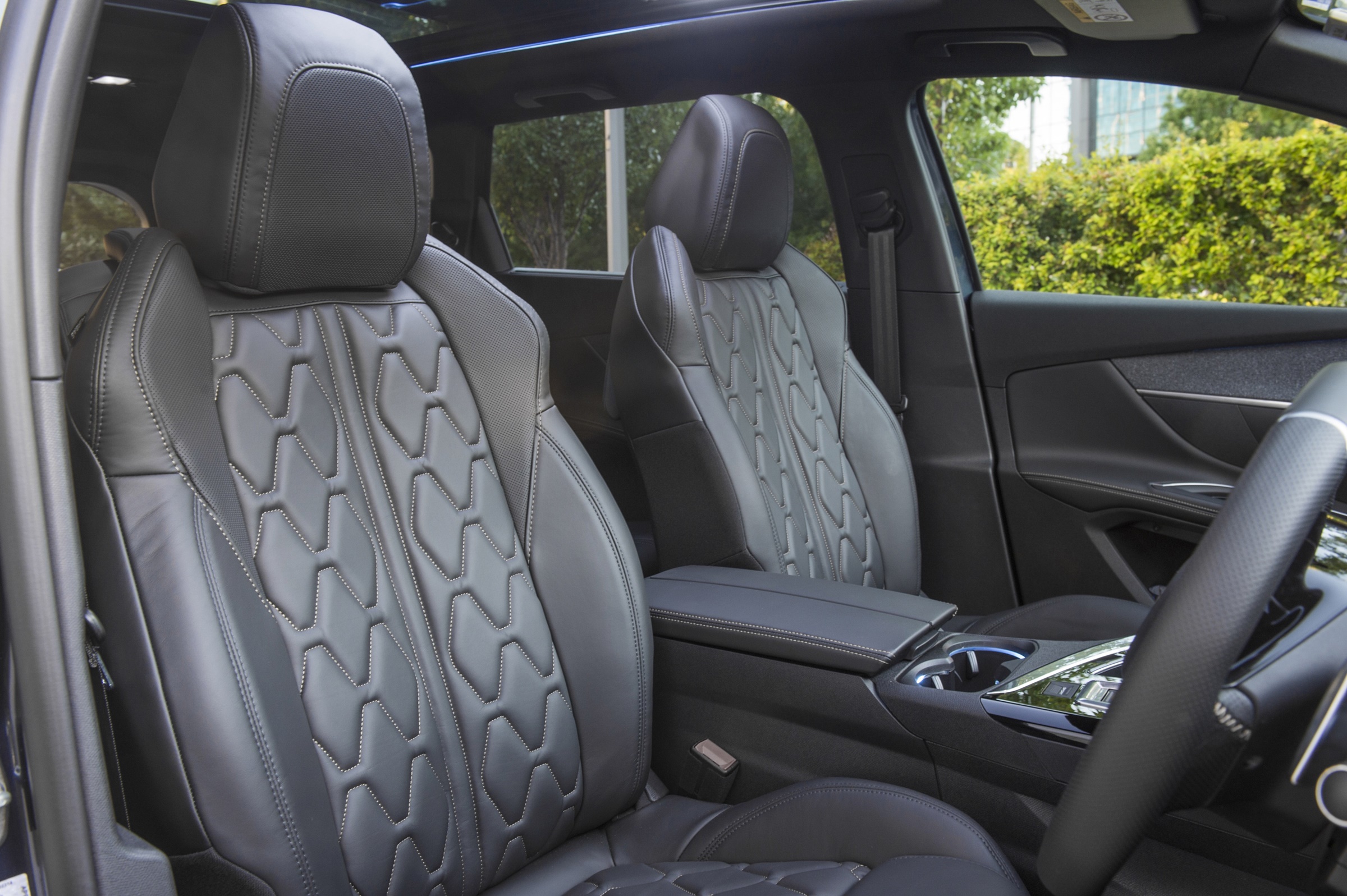 There are a couple of things you first notice. You sit upright with a deep foot well in the quilted leather seats. The compact steering wheel and instrument panel are different to normal, with the instrument sitting higher than the wheel rim. It takes a little adjustment, but feels somehow right after driving for a while and it is such a simple, yet effective design. 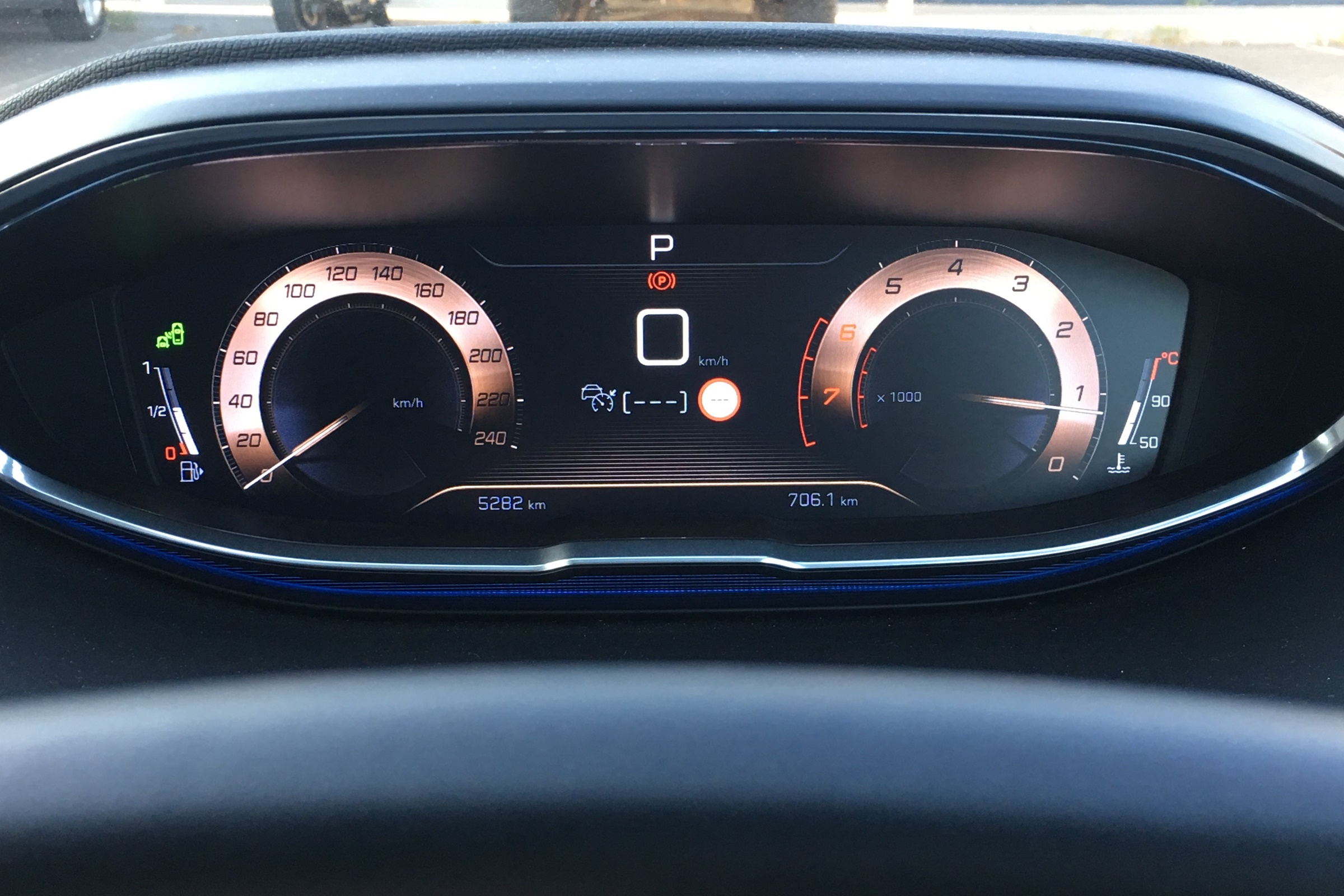 5008 has a 12.3” high resolution dash that has awesome clarity and is customisable. It is yet another instance of design flair that has functionality at its core. Digital dash can be changed by buttons on steering wheel (rotary dial) while modes can also be changed by use of the button on the end of the right indicator stalk.

Front seats are multiply electrically adjustable, extremely comfortable and the driver is spoiled with a massage seat in the GT Line. The Premium package is a $4,000 odd option along with the leather and sunroof, but absolutely worth it. I think I turned this on when I picked up the car and had it operating the entire time I drove. Let me state that:

The upright seating contributes to a feeling of spaciousness and clear overall visibility. Here the dichotomy of French design becomes apparent. While having a spacious ambience, the driver feels cocooned, not restricted, with all instrument oriented towards them. The front is a fluid design that has individual pods. 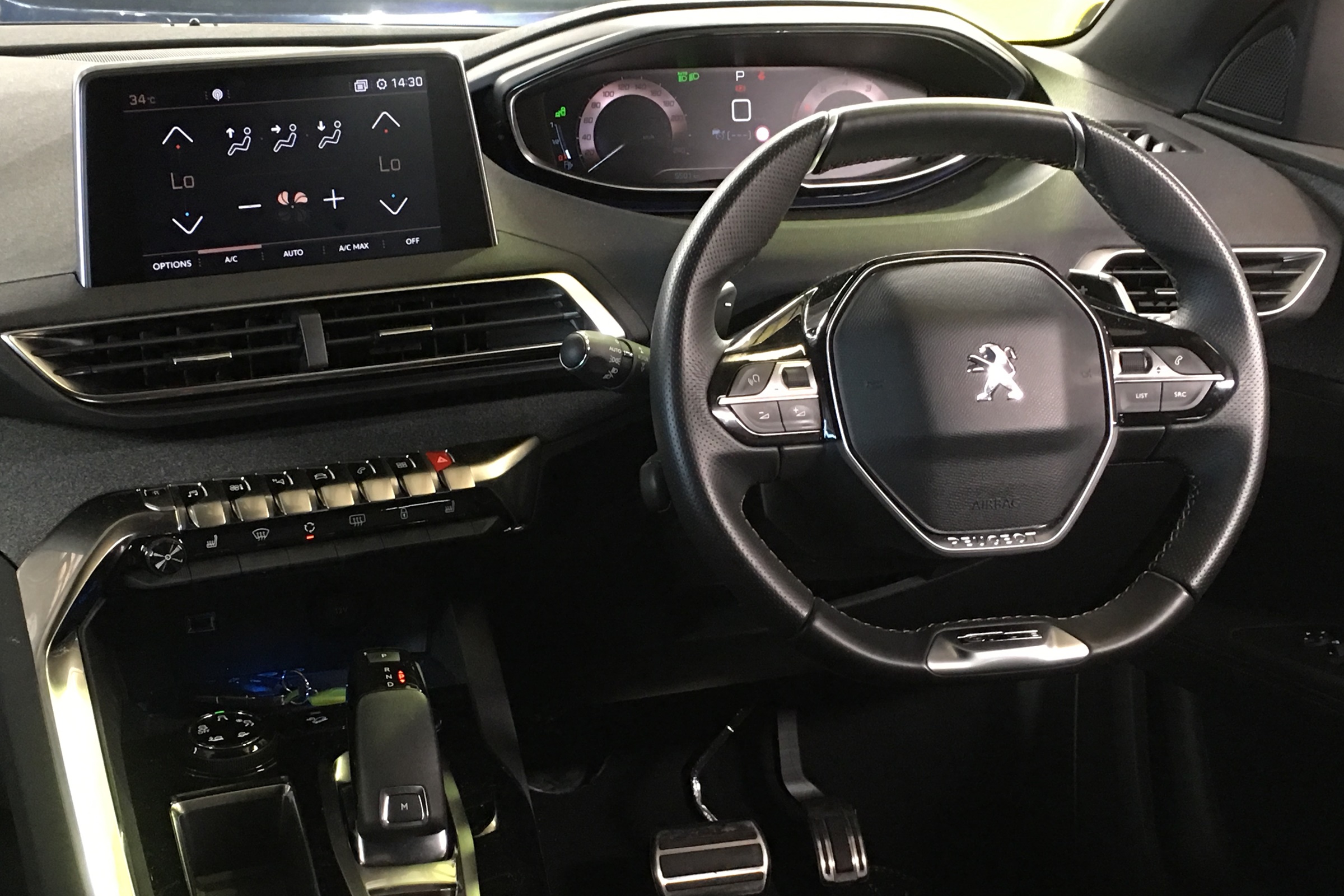 One negative is the cruise control stalk. While it has some clever features, such as matching the cruise control to the signposted speed if you desire, it is awkward to use for the uninitiated and takes your eyes off the road to see what you are doing. If it was your own car, you would get used to it after a while, but it is unnecessarily complicated and hidden.

One good thing is that the 5008 seems better equipped to handle the harsh Australian summers with A/C that actually works, rather than struggles like some models in the past. However the controls are on the centre screen, and when on the phone you can’t access them to turn the A/C down, as I found out on a call. 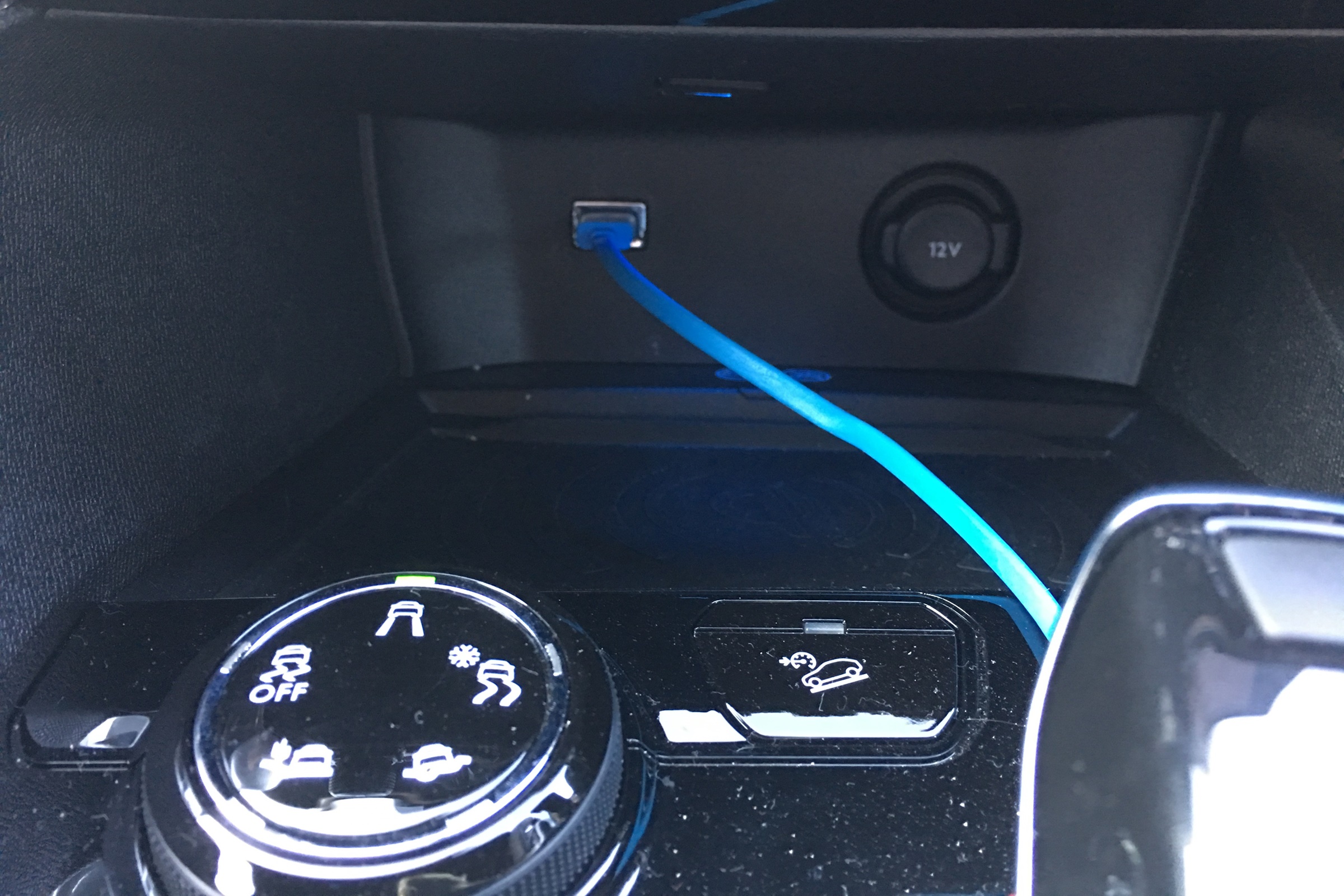 The large centre console bin provides both a comfortable arm rest and good storage, but I’m not a big fan of the double opening lid. In front there are a couple of decent sized cup holders, then the transmission selector and a handy storage spot.   The start button is in front of the lever and a clever phone charging pad with easily accessible USB and 12V ports.

I have to admit I am not a fan of the transmission lever. This is probably because I am a clumsy old fart, but at times I found it missing getting into gear, from user error, and usually at awkward times. It looks awesome though. Like the cruise control stalk, if this was your own car you would quickly get used to it I guess. 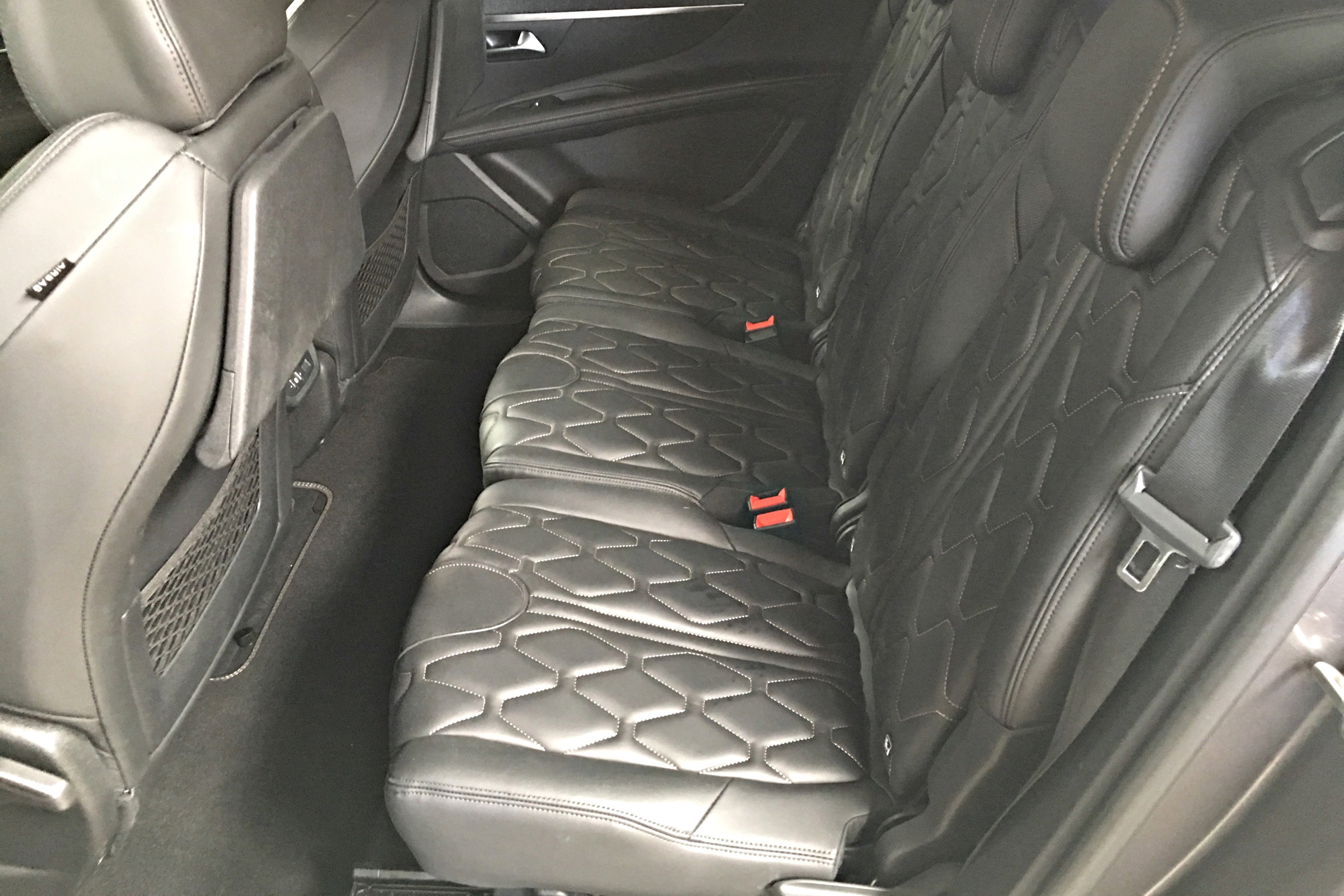 The middle row seats are very comfortable and individualised for three people. There is plenty of head, shoulder, and knee and leg room. For convenience there are aircraft-style trays on the backs of the front seats, hooks and cupholders, air vents and USB ports. 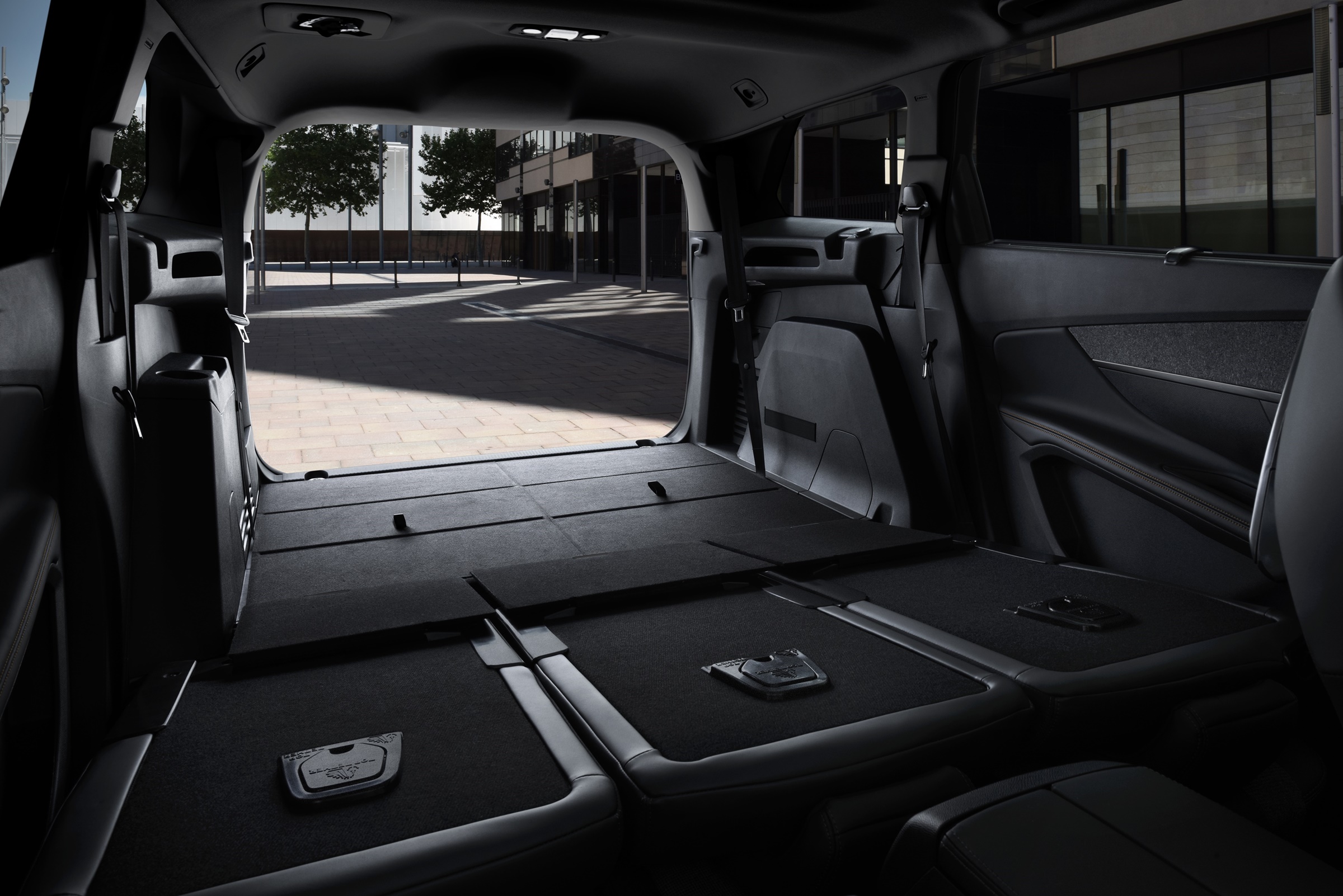 Flexibility was central to the 5008’s design ethos with a configurable seating package allowing for each one of the three second-row seating positions to be folded, tilted or moved individually – the only vehicle in the class to offer this feature. Combine this with the fold flat front passenger seat and you get an extraordinary 3.2m length available for paddle boards etc.

Uniquely, the 5008 is the only SUV on the Australian market to offer Isofix and top tether child seat fixing points to all second-row occupants – allowing fitment of three child seats benefitting from the latest restraint technology. The vehicle has two underfloor storage areas in second row floor as well as sun shades to rear doors. Other storage includes large glove box, large door pockets, a light in the centre console and a cooled area for a drink (cup holder space 9) 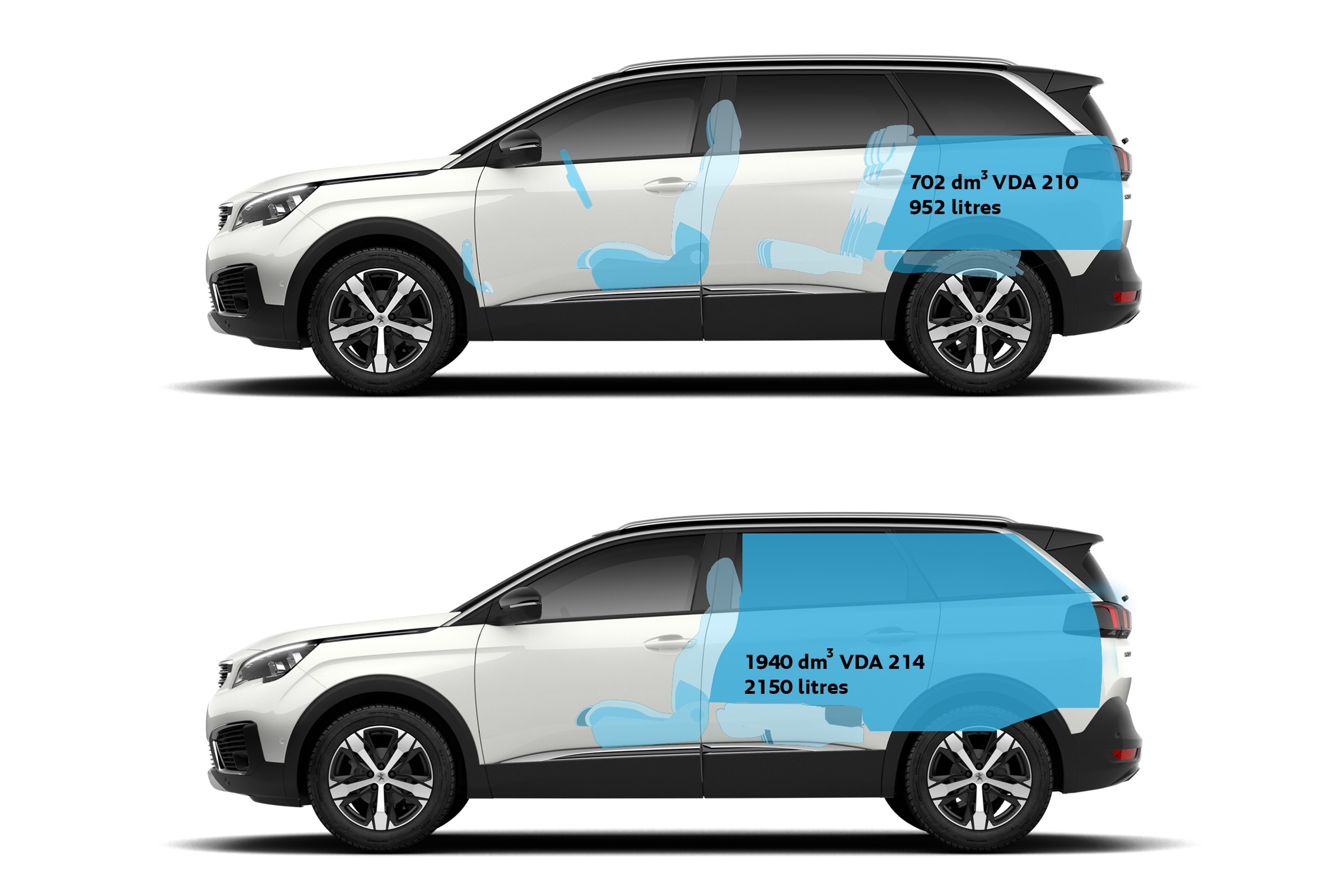 Third-row seats can be individually set in place or removed to give as much or as little boot space as desired. They can even be used as picnic seats or at the beach. They are, like most in this segment, suitable for smaller individuals only. Boot space is up to 780 litres. Its appeal is increased by a host of accessories that includes 12-volt sockets and a boot cover. 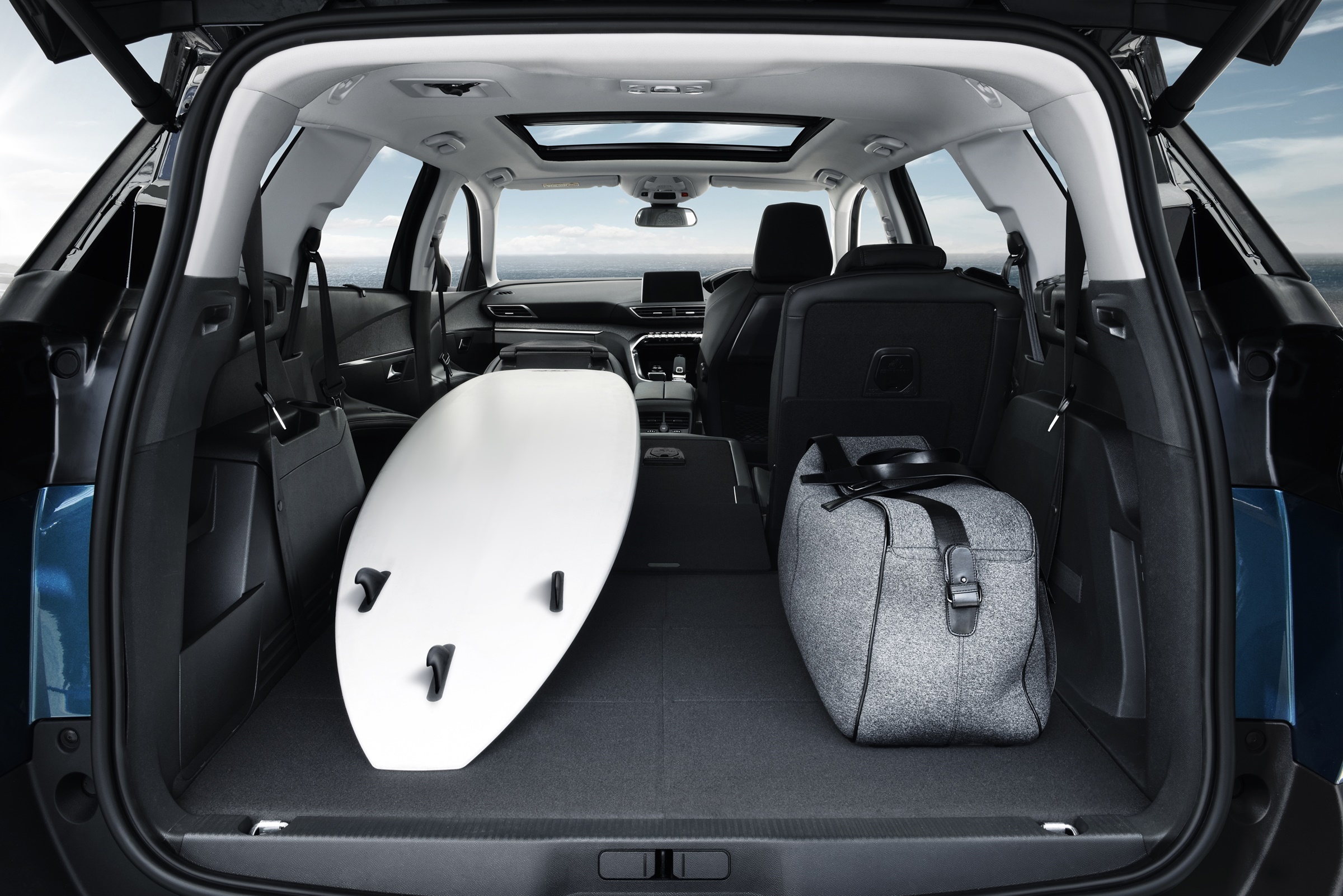 A smart lightweight composite, electric tailgate, allows hands-free activation and opens and closes quickly and effortlessly, simply by placing a foot under the rear bumper. I must admit when I tried this I looked like a long neck goose doing a one legged weird dance behind the car. There is even an electric scooter option for those that have to have the latest trend. 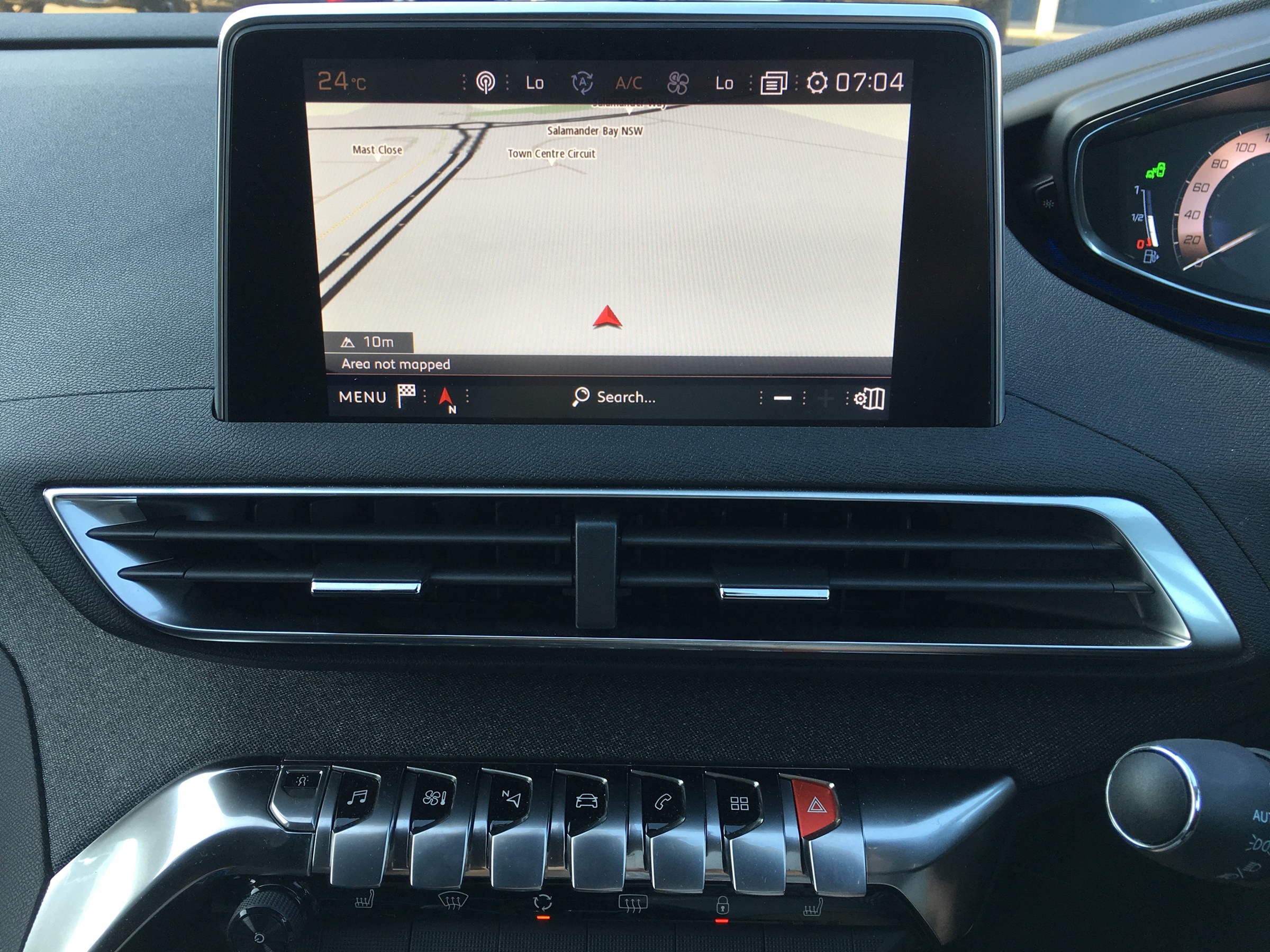 Sitting on top of the centre stack is the 8” capacitive touchscreen display. While many cars this looks like a tablet stuck on as an afterthought, the 5008 seems integrated. Again the design flair with functionality appears in both the layout and useability.

There was an update to the user interface, now if you (gently) prod the navigation screen with three fingers (at the same time), the main screen turns into six large buttons aiding usability. Other clever functions including Mirror Screen, CarPlay and standard 3D navigation ensure drivers stay connected without stress.

One design feature that many will love, others will go WHY? The GT and GT Line i-Cockpit® Amplify system, at the push of a button, will infuse the cockpit with various scents designed to match the driving style, along with other sensory adjustments to sound, touch, sight etc. Say no more! 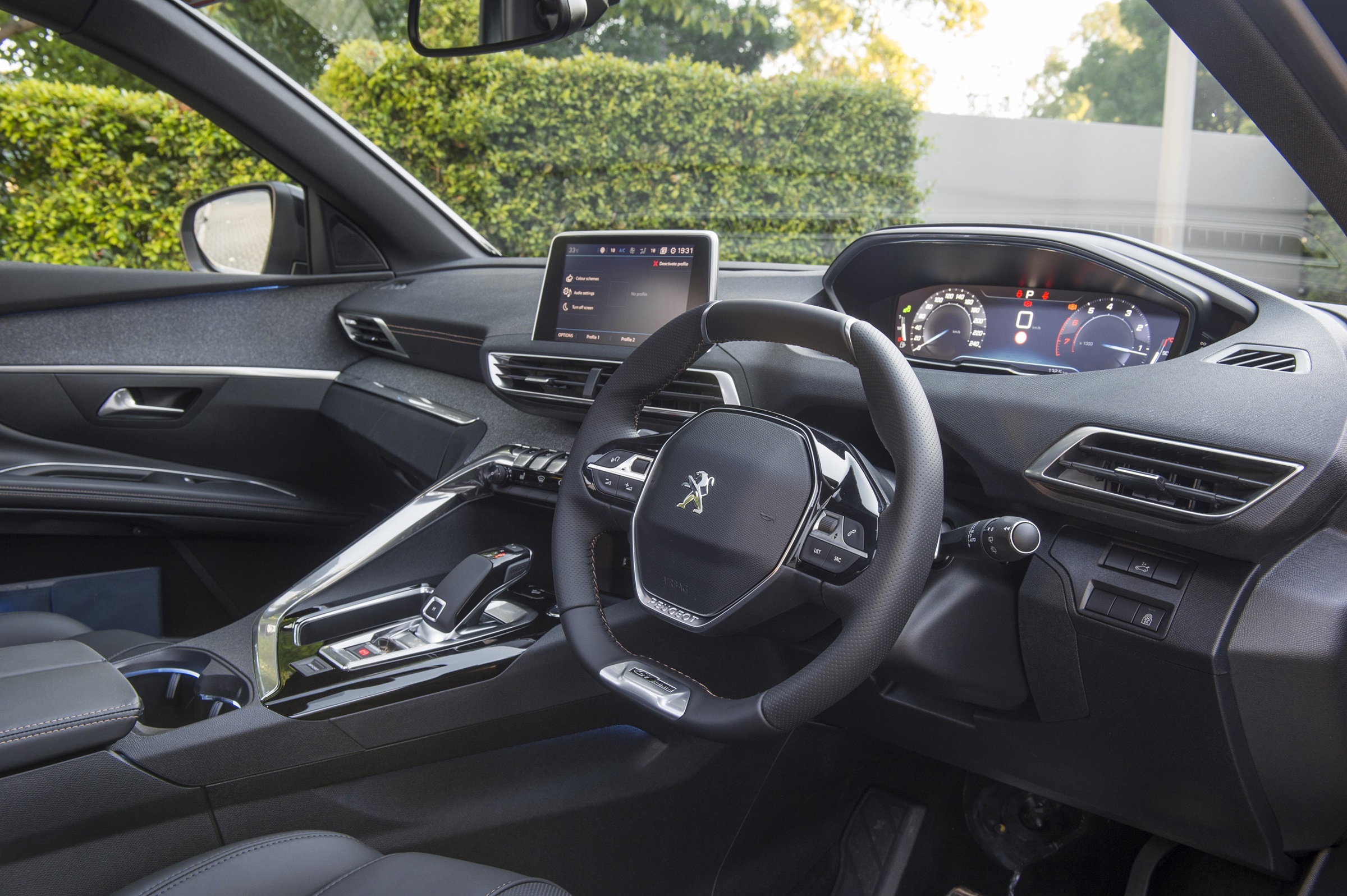 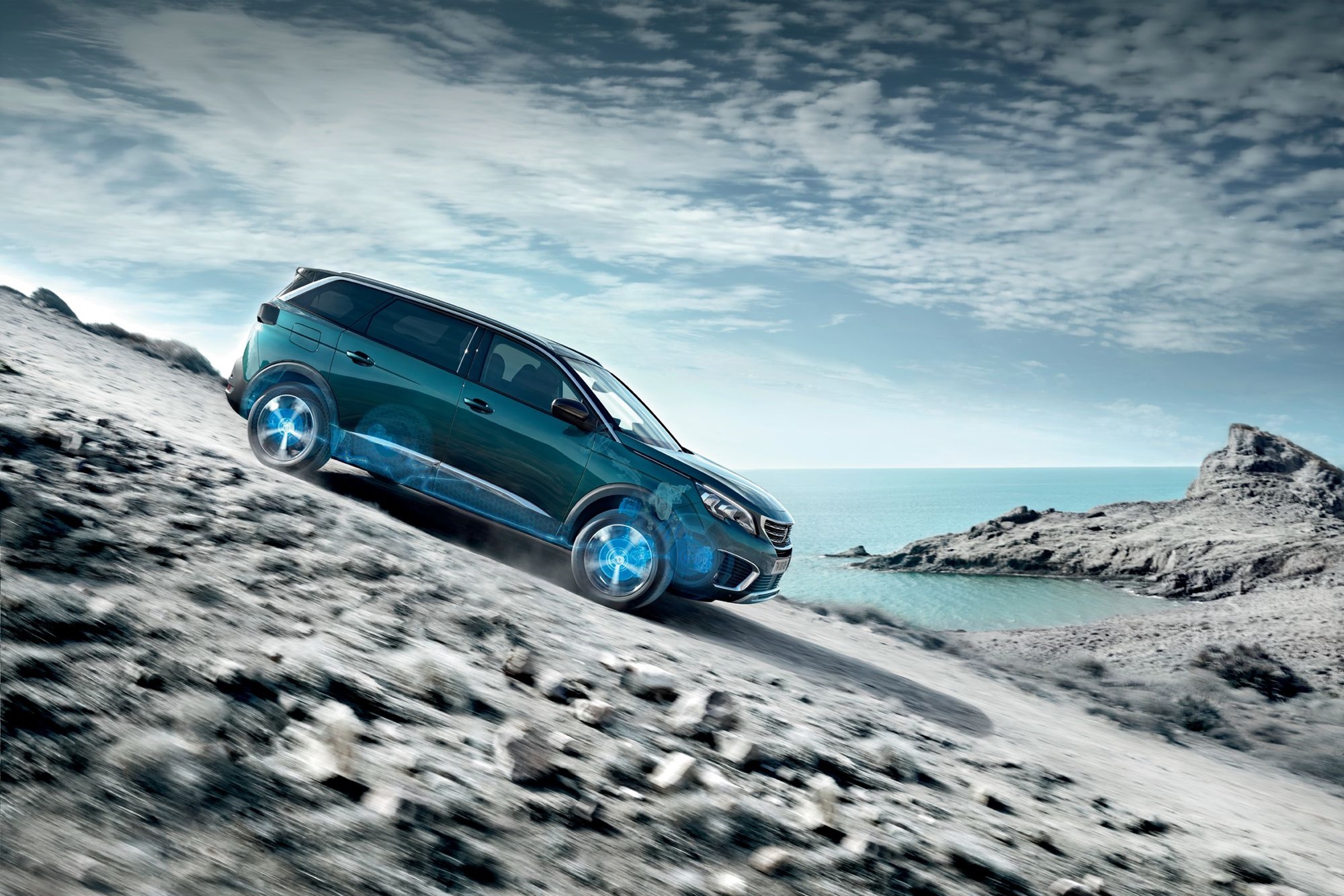 What was surprising was how the 1.6T Petrol engine displayed diesel characteristics with low torque, but with more spirited response.

The steering is finely tuned with good response to driver input. The ride, for and SUV, is pretty good. Peugeot have been justifiably revered for their long travel, loping ride that tames the worst of our back roads, in the past, and the 5008 continues this tradition. It has achieved a good balance between firmness, compliance and feedback.

A Driver Sport Pack also boosts dynamic sensations with a sportier engine sound, giving a more responsive accelerator pedal and sportier power steering. It also adds sports-style gear changes. The wheel, as mentioned, itself is small, comfortable and enhances the sporty feel with direct feedback from the front wheels. 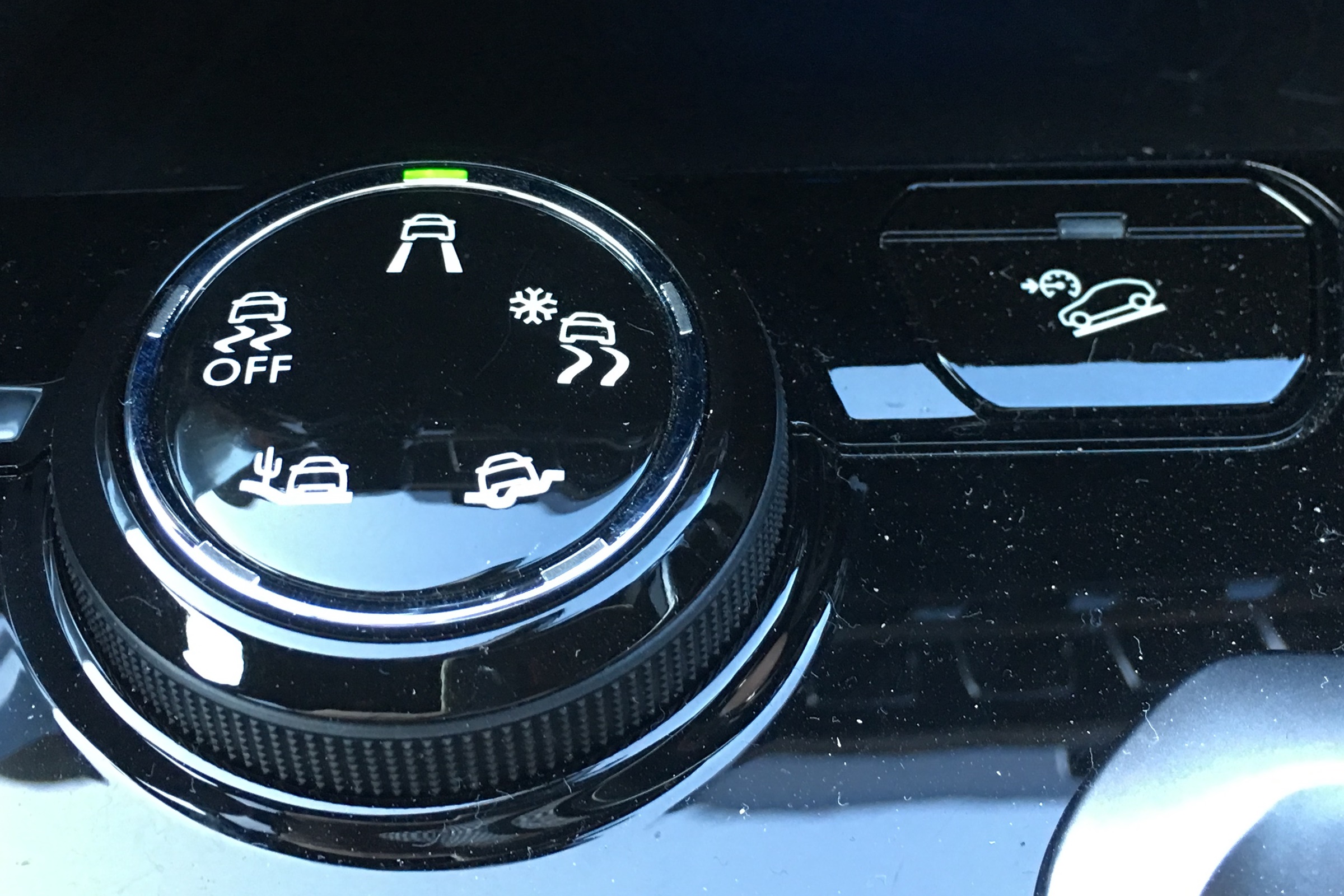 The Peugeot is a misnomer SUV. For the most part it lives as a 2WD SUV but buyers can opt for the Advanced Grip Control. While a clever system, it still operates only on the front wheels, and as such cannot be classified as an AWD SUV. However the system does provide a modicum of advanced grip technologies.

This optional system bolsters traction through the following features: 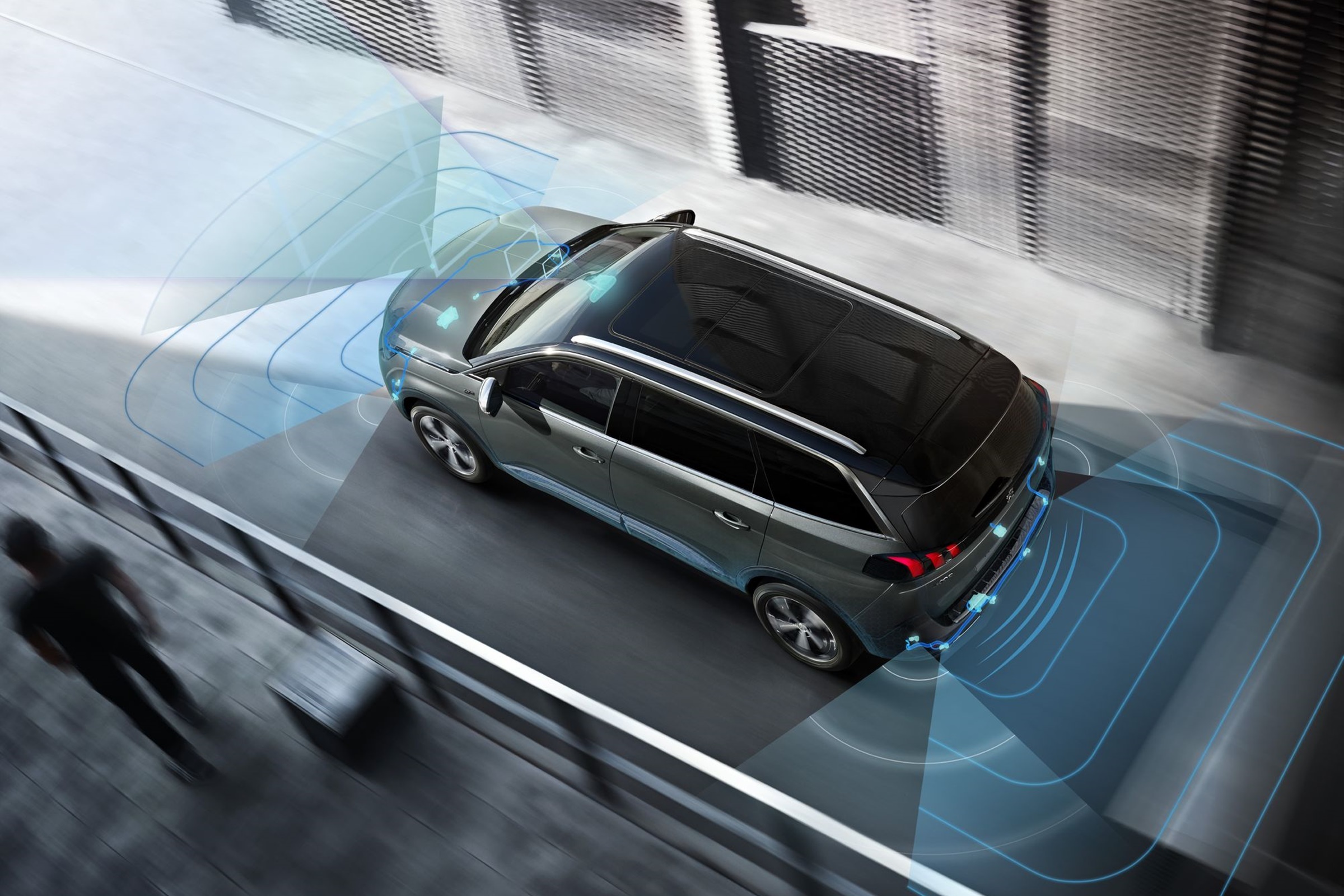 Peugeot has been awarded a 5 Star ANCAP Safety rating for the 5008.

This is based on core structure designed to protect occupants, which is overlaid with a range of technologies and advanced safety features to ensure all occupants feel safe and secure.

This starts with the standard fitment of leading edge Autonomous Emergency Brake Technology and a vast array of active and passive safety systems, including:

After spending a week in the 5008 GT Line I have become enamored with it. It also attracted a bit of attention from curious by standers.

In a segment that offers competent and quality, yet somewhat similar competition, the Peugeot 5008 brings a different quality. The French design flair that finally has functionality at its core, offers a stylish alternative.

It has an awkward yet appealing style, has plenty of room inside, is packed with innovative design and features, reintroduces the famed Peugeot ride and handling on our harsh outback roads and is backed with a 5 year warranty. 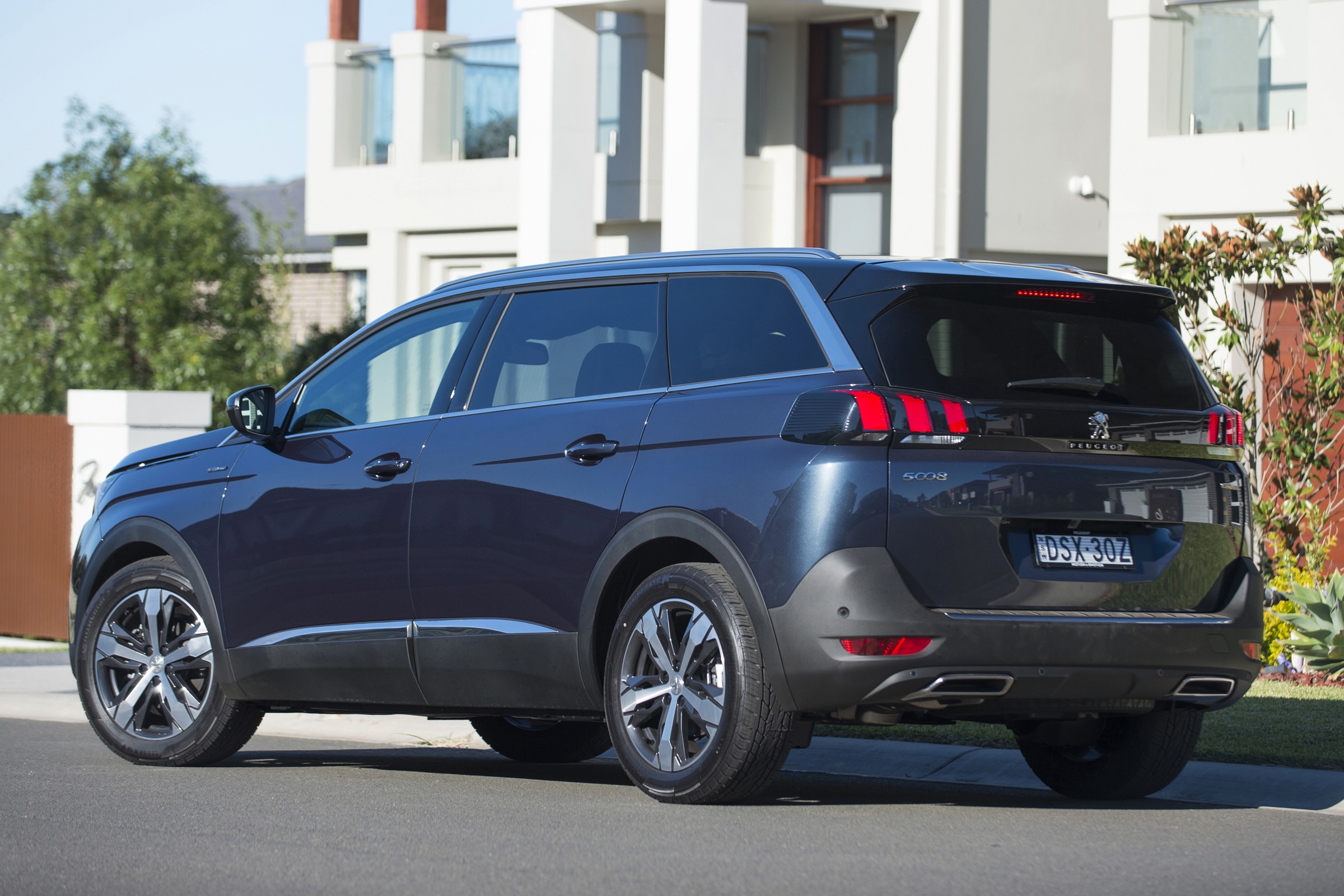 After spending a week in the 5008 GT Line I have become enamored with it. It also attracted a bit of attention from curious by standers.

Peugeots 5008 brings a little character and French flair to a segment that can appear a little homogenised. Heralding a return for the once popular French manufacturer [Read More]

Jeep Wrangler Rubicon back for 2021