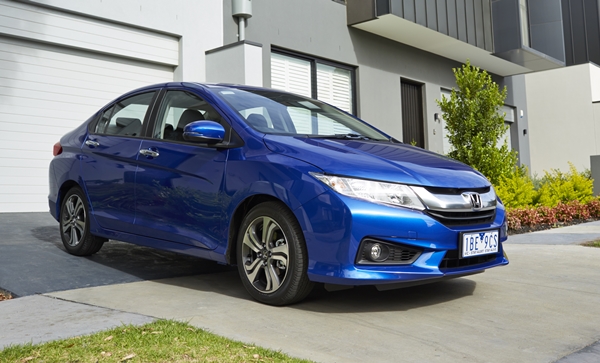 Honda’s offering in the light segment just got more interesting, with the new Honda City arriving in showrooms in April.

“The Honda City, available in 55 countries, has sold over 2.2 million units since its introduction,” said Honda Australia Director Mr. Stephen Collins. “The Honda City is a cut above its competition and with new styling, loads of standard features such as Display Audio and reversing camera, it represents excellent value for money.”

The new Honda City’s boot is even bigger – if that was possible – with an enormous class-leading 536 litre capacity, more than enough room to fit everyone’s gear for those trips away with friends.

The Honda City is the second vehicle in the range to feature Honda’s new state-of-the-art audio system – Display Audio – that can mirror certain functions of a compatible Apple iPhone (iPhone 5 and above) such as Honda satellite navigation and approved third party apps.

It also allows seamless integration for Bluetooth and audio streaming with a smartphone** and can be operated with Siri Eyes Free (compatible Apple iPhones only).

More details about the Honda City’s features and pricing will be revealed closer to its launch.

The Kia Picanto GT is the tiny car punching way above its weight. I must say, this car impressed me from the get go. As soon as I jumped in, I felt an unexpected level of comfort and impressive design. [Read More]

The Mitsubishi Mirage completely captures the needs and wants of today’s younger drivers and ‘downsizers’, Mitsubishi has reinvented a much loved classic and firmly cemented their place in the light car segment. I recently tested the top of the range LS automatic Mirage. [Read More]