New Toyota Yaris has moved right upscale in every department accompanied by a significant price hike compared with the cheap and cheerful predecessor. 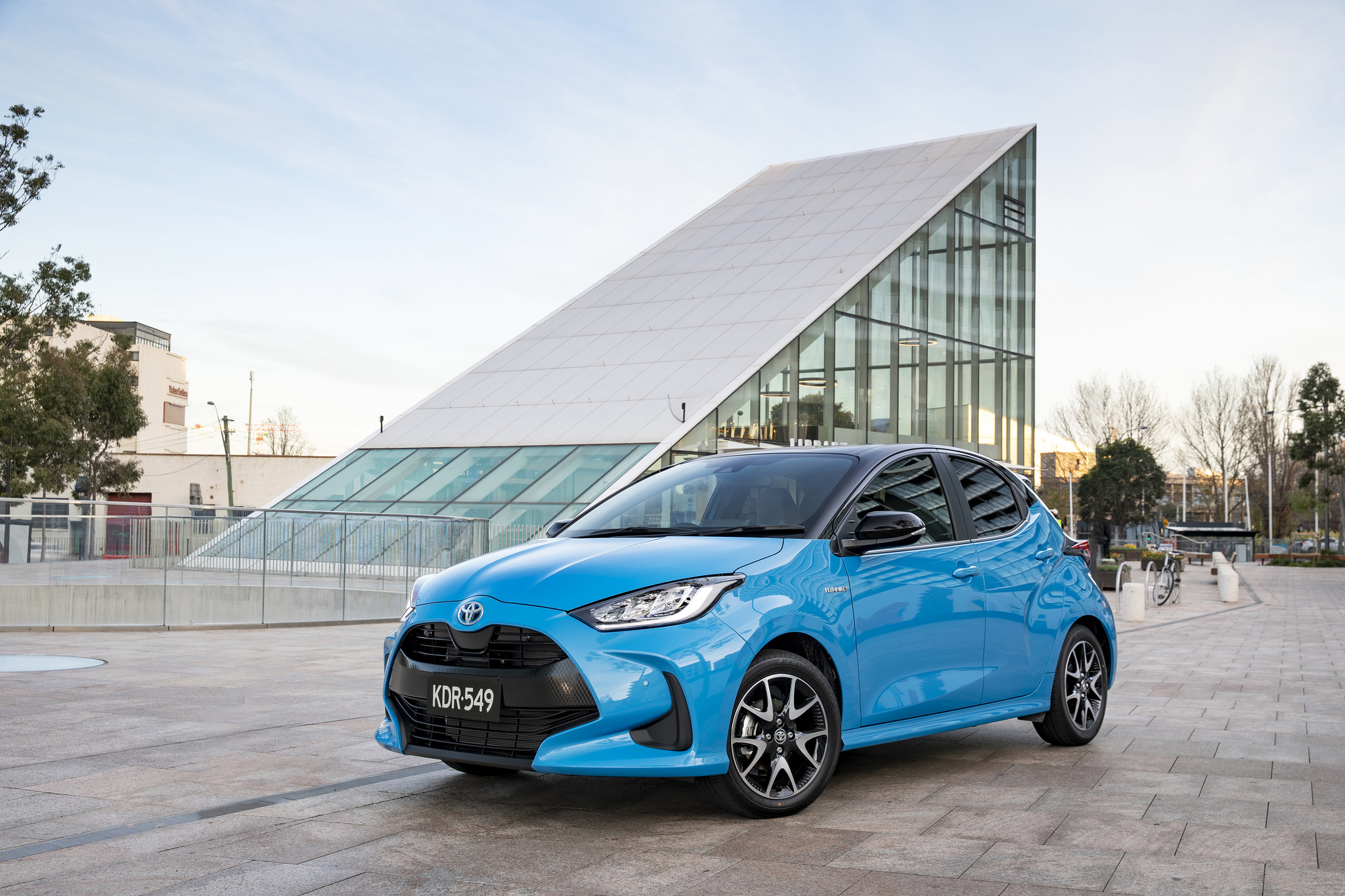 Obviously, Toyota decided to draw a line in the sand and make a higher quality light car this time around.

They sure succeeded but the jury is still out on whether punters will wear the increase this far down the food chain.

Take the time to actually drive new Yaris and the difference is clearly evident.

Boil it down and the only real competitors are Suzuki’s Swift and possibly the VW Polo… both relatively old cars in terms of model life.

Yaris is striking, distinctive to look at with angles and an angry face setting it apart from cloned competitors.

The top of the range $32,100 ZR Hybrid driven clocked an amazing 3.5-litres/100km without really trying. Why would you suffer the inconvenience/cost of an electric car?

Built on a new global Toyota platform, new Yaris is chock full of safety and smart powertrain technology along with plenty of kit in the ZR’s case.

Performance from the three cylinder, 1.5-litre petrol engine, with hybrid electric drive running back up, is strong giving the ZR driven a turbo feel under acceleration.

It cranks out a handy 85Kw and 141Nm combined petrol/electric and can run full EV for a short period.

Uses 91 fuel too and the fixed price servicing at $195 a pop is a bargain.

The engine uses direct injection and dual variable valve control for maximum efficiency while the electric motor feeds from a lithium ion battery.

No, you can’t plug it in. Why would you want to go through that every time you stop? 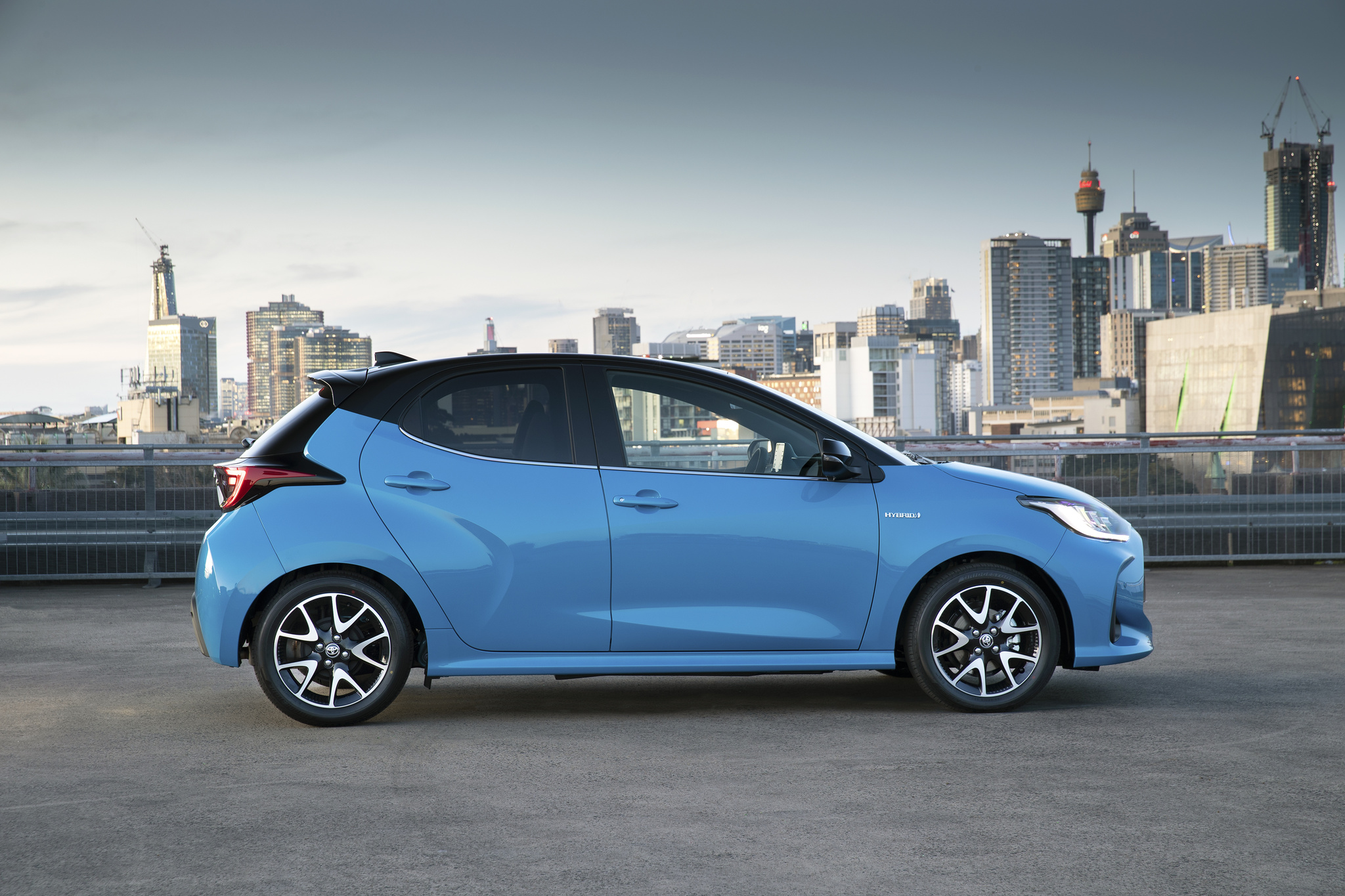 It’s a cranky looking little bugger particularly from the front with a drooping grille and sloping headlights together with faux air vents on the grille’s outer edge to impart to appearance of a wide “mouth.”

The bonnet is longish when compared to the truncated rear end that looks like it’s been sliced off at an acute angle. High mounted, notched in  tail lights complement the tailgate shroud on top. Yaris has a hunched look thanks to pumped out guards front and rear and the roof has smooth curves from all sides together with a central indentation for strength/noise suppression.

The overall effect is distinctive and pleasing on the eye, a significant move away from the cloned look of just about all other brands in the class. 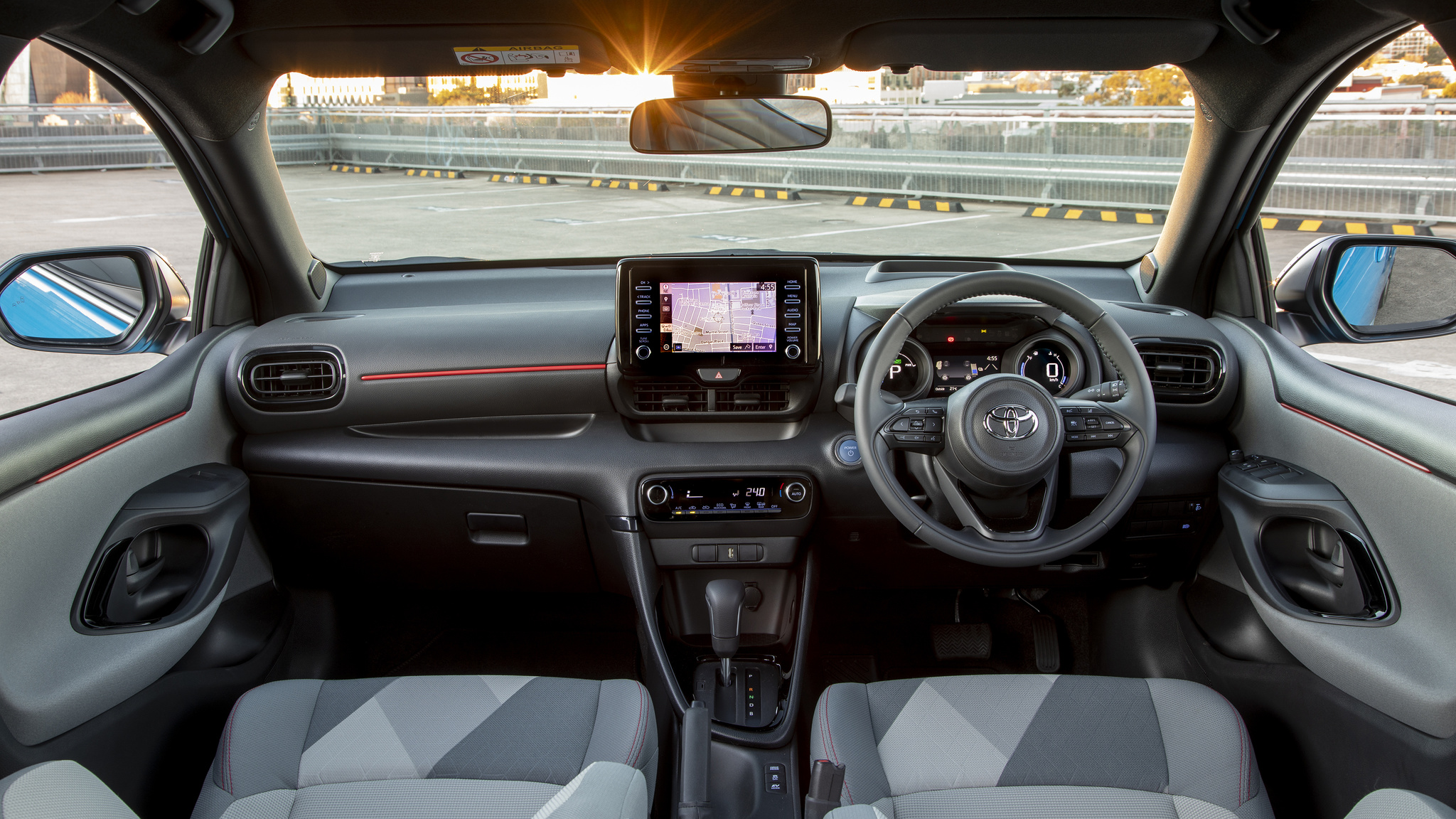 Inside is a move upscale too with a generic grey Toyota look to many comp0onents such as the large central touchscreen topping a centre stack with a minimal number of controls/switches. A neat little shelf under the screen is a perfect phone perch and the air/vent controls are under that.

The wheel is small and features numerous functions with a twin dial instrument pod behind.

It’s easy to get into and there’s a decent amount of room in the back seat with a small luggage space behind.

I found the front seats comfortable on longish drives and adequate adjustment is provided for most size drivers.

You can fold the rear pew for a large load space.

Overall, new Yaris is what you’d expect from Toyota with a few more soft touch surfaces than before and better seats. The audio is good for a car in this class and the ZR Hybrid driven has plenty of kit offsetting the price. Really like the satnav and head up display. 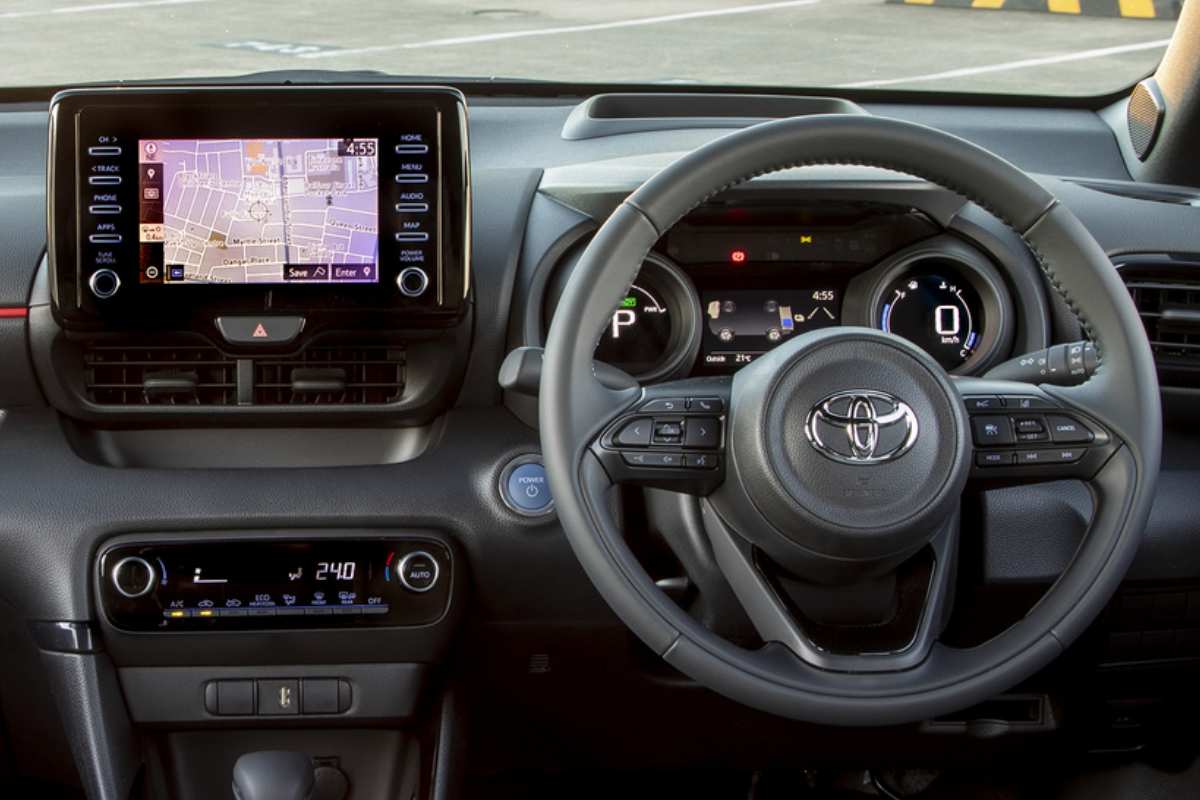 As this is the top of the range Yaris you get plenty of kit: 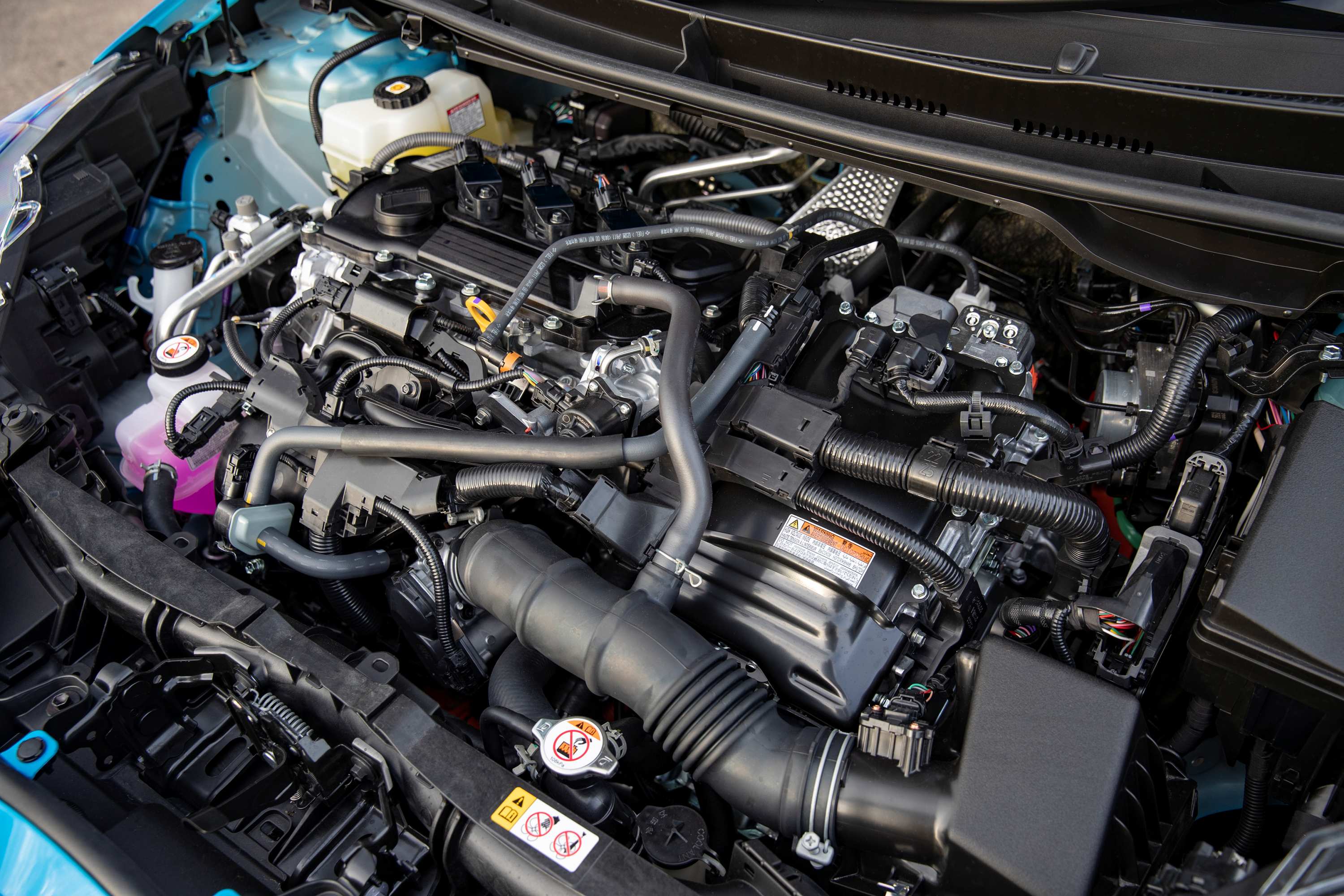 This is where new Yaris gets really interesting because the hybrid version driven has a sporty flavour similar in some ways to a turbo-car. It gets going quickly and feels good to push harder than you would normally in any other econobox.

The three pot engine is unusual because of its electrically operated variable valve timing instead of oil pressure driven. Apparently it’s quicker to respond with efficiency gains to performance and economy.

The CVT auto feels pretty good as it exhibits minimal slurring (if any) and is tapped right into engine load and how it’s being driven.

Of course, a characteristic three cylinder warble is evident but that is not unpleasant to the ear.

Dynamics are on the sporty side with sharp steering response and strong brakes despite the rears being old tech’ drums.

The suspension itself is a simple strut front with a beam rear axle. Works a treat.

On test I saw 3.5-litres/100km without really trying which suggests the claimed 3.3 is achievable… on 91.

The general drive feel of ZR hybrid Yaris is sporty and fun. It won’t disappoint with a big bonus at the bowser. 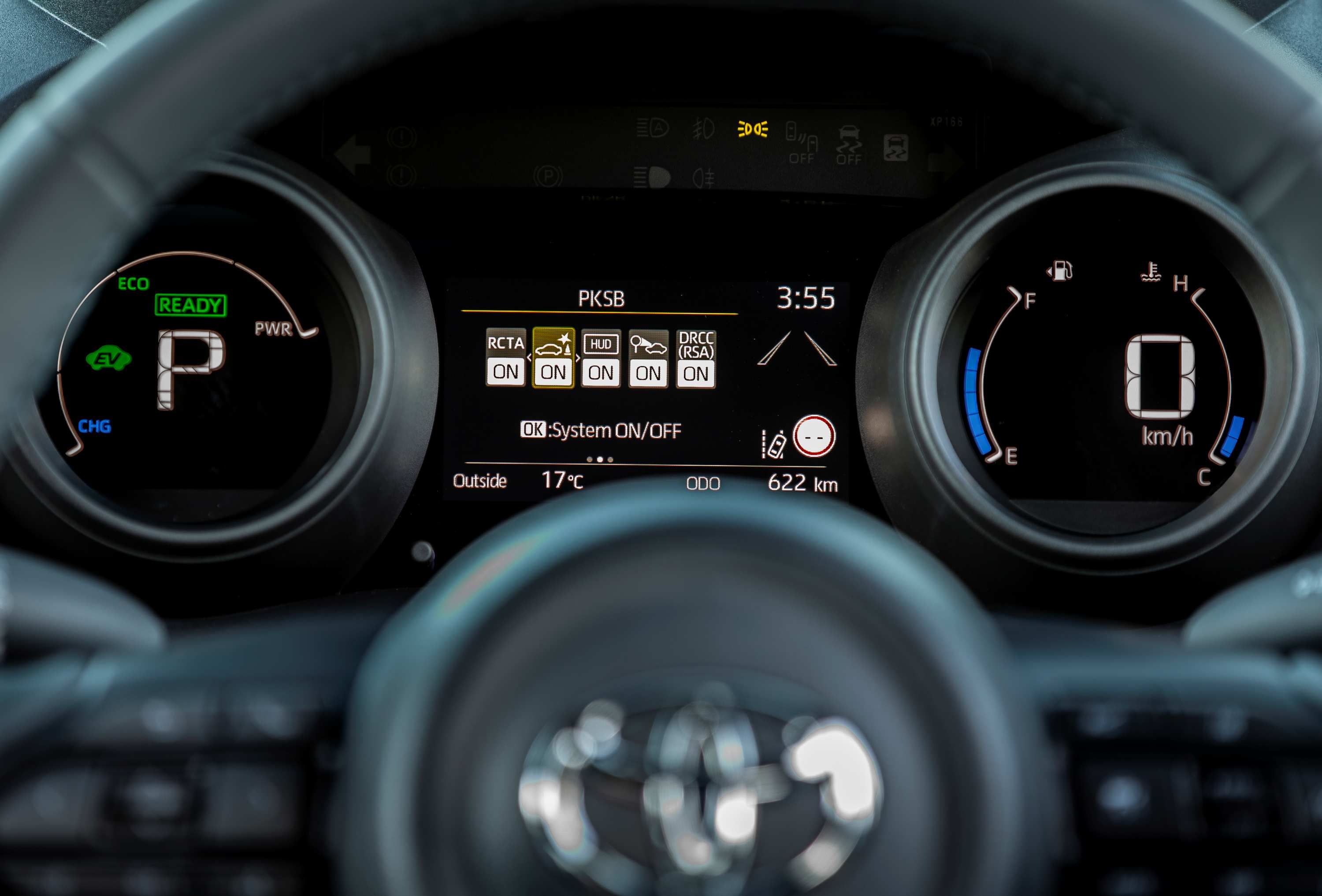 Five stars all the way with a suite of active and passive safety equipment including advanced driver assist features. Some can be switched off if you find them too intrusive.

This is a new global platform from Toyota so that translates into the latest chassis technology and design offering next level safety and strength.

Not sure but I reckon Toyota Australia had input into new Yaris’s dynamics… springs, dampers, tyres, wheels and sway bars which in this case are stiffer than before with softer springs. 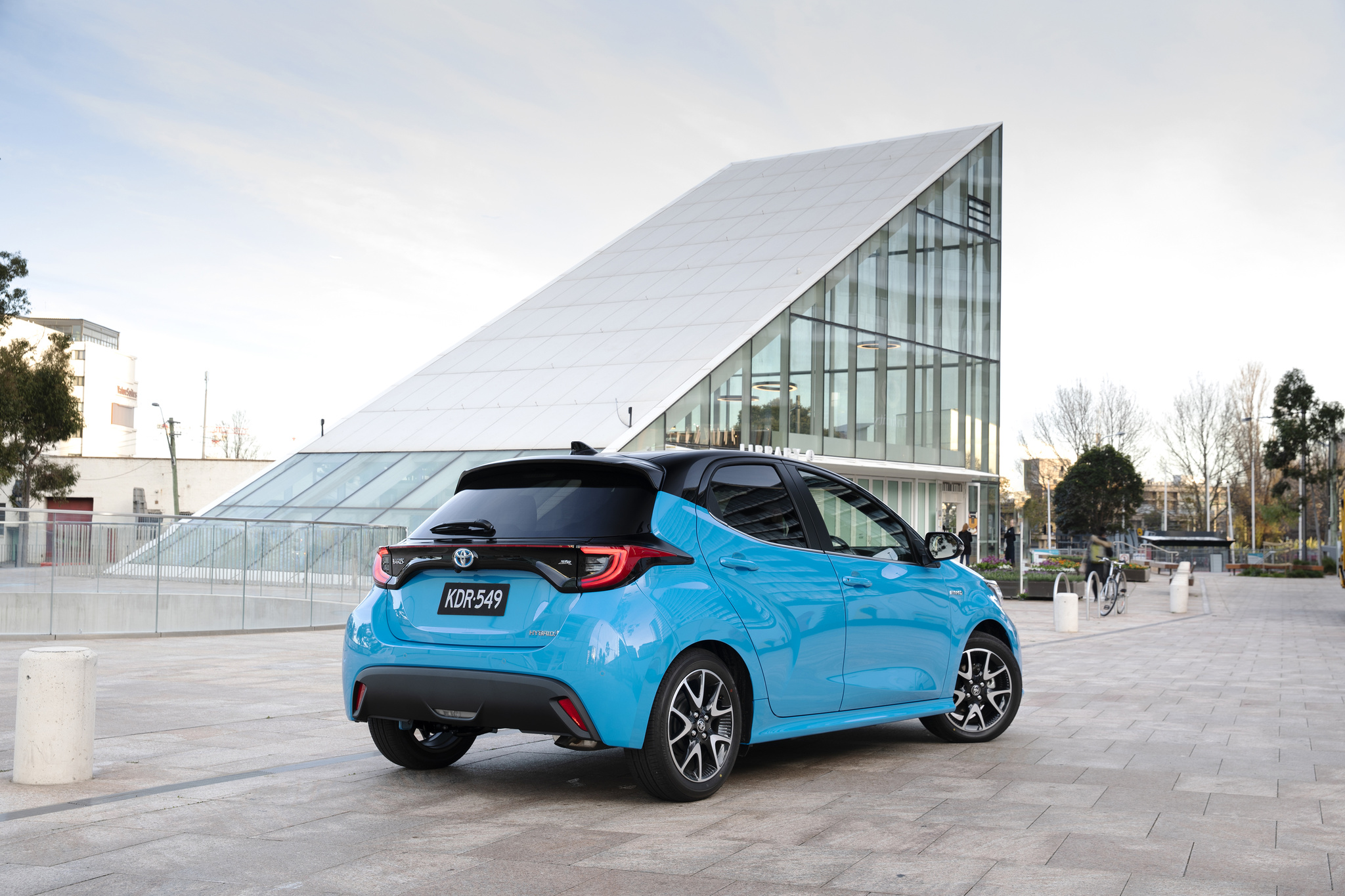 Wow, really like the new Yaris, especially this one with hybrid drive. It makes an electric car look pretty lame and costs at least $20 grand less. Performance is not an issue and you won’t be opening your wallet too often, even servicing is fixed at $195 a pop.

Great in tight parking and strong on the freeway.

Possibly the ideal couple’s car for the 21st century. 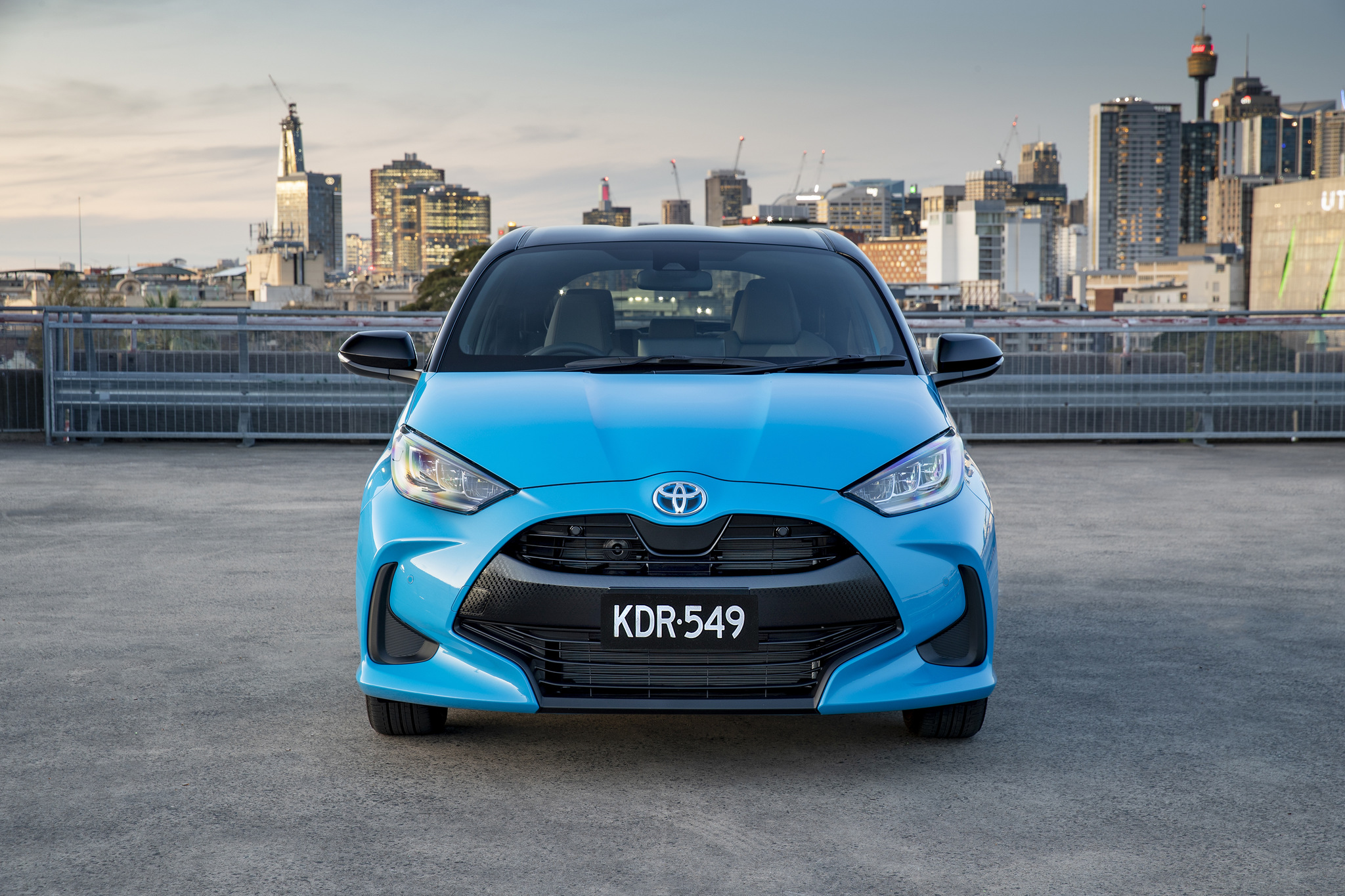 Wow, really like the new Yaris, especially this one with hybrid drive. It makes an electric car look pretty lame and costs at least $20 grand less. Performance is not an issue and you won’t be opening your wallet too often, even servicing is fixed at $195 a pop.

Great in tight parking and strong on the freeway.

Possibly the ideal couple’s car for the 21st century.

Audi A3 Sportback makes its debut

March 4, 2020 Rob Fraser Audi Comments Off on Audi A3 Sportback makes its debut

The fourth generation of A3 Is now being introduced on the market – sporty, digitalised and fully connected. The first all-new Audi A3 Sportback vehicles are expected to arrive in Australia before the end of the year. [Read More]