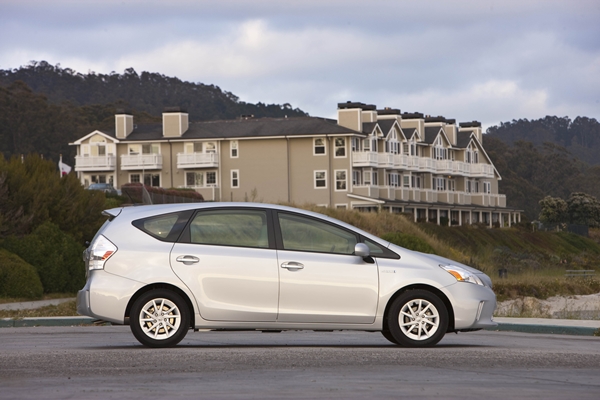 The new Prius v will be the first Toyota production vehicle in Australia fitted with a lithium-ion battery – placed under the centre console between the driver and front passenger.

Toyota’s lithium-ion battery is smaller and lighter than the nickel-metal hydride battery in Prius, but has similar storage capacity.

Prius v, due on sale in May this year, will join an expanding Prius family that includes the standard Prius hatch and the Prius c city car.

“The Prius v is all about versatility – it is larger and roomier to meet the needs of growing families while retaining the Prius DNA of environmental performance and fuel economy,” Mr Callachor said.

“Due to the placement of the lithium-ion battery pack between the front seats, there is minimal compromise to the MPV-style seven-seat passenger accommodation or the load space,” he said.

“Families will have the flexibility of using all seven seats or folding down the third-row seats to convert the car into a five-seater with extra luggage space.

“Customers can also fold down the second-row seats to accommodate more cargo than many SUVs and wagons on the market today.”

Prius v has been newly designed from the ground up – an evolution of Prius, not merely an elongated version. All exterior body panels are new.

It is 135mm longer, 30mm wider and 100mm higher than the Prius hatch with the wheelbase extended by 80mm, making it possible to accommodate adults in all three rows.

This represents more than 80 per cent of all global hybrid sales, giving Toyota an unquestionable lead in the drive towards sustainable mobility.

Toyota has deals on HiLux, the Kluger family wagon and the Yaris, Corolla, Prius and locally built Hybrid Camry passenger cars for Christmas.

Toyota RAV4 GXL Hybrid 2WD could be the perfect urban SUV. I spent a week in this car and its priced from $40,450 plus the usual costs. [Read More]

Toyota expects to have the most affordable hybrid car on the market when it launches the Prius c hatch late next month.
“Prius c will bring Toyota’s renowned Hybrid Synergy Drive® technology to a new segment of buyers at a more accessible price,” Mr Callachor said. [Read More]