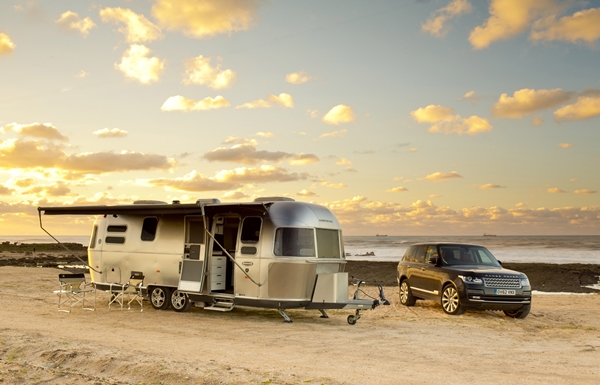 Range Rover demonstrates it’s breadth of capability by towing an Airstream to Morocco and back!

In order to demonstrate the class-leading towing ability of the all-new Range Rover, Land Rover teamed up with an American icon to take part in the ultimate road-trip to one of the highest points in Africa.

With a newly-launched Airstream 684 Series 2 aluminium travel trailer hitched to its electrically-deployable tow bar, a Range Rover Autobiography with the 250kW SDV8 engine was chosen for the challenge “ to drive from Airstream’s European home in the English Lake District, to the top of the Atlas Mountains in Morocco – and back¦

More European Airstream owners choose Land Rover products to tow their ‘silver bullets’ than cars from any other manufacturer so all-new Range Rover and Airstream made for an appropriate pairing. The journey started at the factory where Airstream finish their European specification trailers in Tebay, just a few miles from the Scottish border, to OukaÃ¯meden, which is the highest ski resort in Africa. En route, it encompassed Land Rover’s state of the art factory in Solihull, Frank Gehry’s amazing aluminium Marques de Riscal building in the Spanish wine region of Rioja, the beach near Casablanca, the desert outside Chichaoua and the race track at Marrakesh, where Land Rover was based for the launch of the new car.

Often on the move for more than 12 hours a day on every type of road imaginable “ from the empty motorways of Spain to the precipitous hairpins of the High Atlas “ the all-new Range Rover coped imperiously with the challenge of towing a 2,399 kg Airstream 5,915 kilometres in just 11 days.

Ben Samuelson, whose firm Samuelson Wylie Associates planned and executed the trip, was deeply impressed by the new car: “The new Range Rover’s towing ability is nothing short of stunning. It pulled the two and a half tonne Airstream like it simply wasn’t there.

It didn’t matter what we, or the weather, threw at it -“ it just did the job we asked of it without question, while truly cosseting us with its extraordinary luxury and refinement. Half way through Spain, we encountered horrendous side winds, the type that sees articulated trucks tipped onto their side, but the Range Rover’s Trailer Stability Assist meant that any sway in the trailer was dealt with before it ever started. And mountains. What mountains? With 700 NM of torque from that mighty V8 diesel at our disposal, there wasn’t an incline that slowed us down at all, even with a gross train weight of well over 5 tonnes. What was possibly even more impressive was the way that, even after repeated 12 hour driving days, we’d step up into that exquisite cabin in the morning and still appreciate its sense of occasion.”

And the overnight stays were no less luxurious…

“You can compare the Airstream to a boutique hotel “ albeit a mobile one “ and taking this combination of rig on your travels injects some serious style and comfort. The moment that really summed up the magic of a journey like this was waking up in the Airstream on a sunny morning next to the beach just outside Casablanca “ only a few days after towing it down a crowded British motorway through typically dismal autumnal British weather. A hot shower was followed by breakfast rustled up in a luxurious Corian-worktopped kitchen and that morning’s Times newspaper downloaded onto the iPad via the Airstream’s satellite broadband. I think we proved that luxury and adventure are not mutually exclusive¦”

Range Rover launched the stunning Velar in 2017 and quickly became a segment leader with its beautiful design and driving dynamics. [Read More]

Hello and welcome to Overdrive where we climb the hills, tackle the bends and endure the potholes of issues to do with motoring and transport.