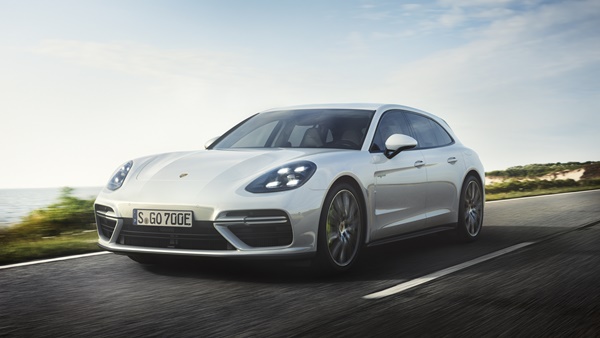 Porsche is expanding its hybrid range with a powerful plug-in hybrid added to the Panamera Sport Turismo model line. The new Panamera Turbo S E-Hybrid Sport Turismo flagship model combines a four-litre V8 engine with an electric motor resulting in a system power of 500 kW / 680 hp. Even when just above idle speed, the Panamera Turbo offers 850 Nm of torque.This means it accelerates from zero to 100 km/h in 3.4 seconds and reaches a top speed of 310 km/h. Average consumption in the New European Driving Cycle (NEDC) is 3.0 L/100 km. The most powerful Sport Turismo has a range of up to 49 kilometres using solely electric power and therefore producing zero local emissions.

It is not just the balance between performance and efficiency that makes the Panamera Turbo S E-Hybrid Sport Turismo unique in its segment; its spatial concept, including a large tailgate, low loading edge, increased luggage compartment volume and a 4+1 seating configuration, means that the new flagship of the model line offers a high standard of everyday practicality.

Even at 1,400 rpm, the V8 biturbo (404 kW / 550 hp) and the electric motor (100 kW / 136 hp) delivers maximum system torque of 850 Nm. The decoupler integrated into the hybrid module is electromechanically actuated via an Electric Clutch Actuator. The result is short response times and a high level of comfort. The fast-shifting, eight-speed Porsche Doppelkupplung (PDK) transmits power to the standard adaptive all-wheel drive system Porsche Traction Management (PTM). 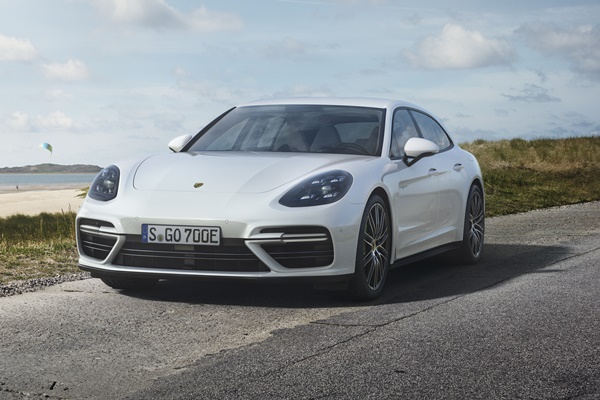 The E-performance drive allows the vehicle to sprint from zero to 100 km/h in 3.4 seconds. It only takes a further 8.5 seconds to reach the 200 km/h mark. Top speed is 310 km/h. Despite this level of performance, the plug-in hybrid model is also extremely efficient: The result from the New European Driving Cycle was fuel con-sumption of 3.0 L/100 km and power consumption of 17.6 kWh/100 km.

The Turbo S E-Hybrid Sport Turismo has a range of up to 49 kilometres and a top speed of 140 km/h when driven solely using electric power, which results in no local emissions. The lithium-ion battery has an energy content of 14.1 kWh charges with-in 2.4 to 6 hours, depending on the charger and power connection.

Unique design, adaptive roof spoiler and 4+1 seating concept
The Turbo S E-Hybrid Sport Turismo offers all of the innovations of the second generation Panamera. These include the digitalised Porsche Advanced Cockpit, ground-breaking assistance systems such as Porsche InnoDrive including adaptive cruise control and optional rear-axle steering. 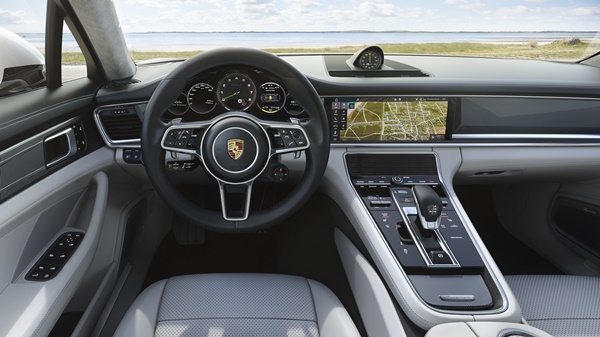 Another of these innovations is the roof spoiler, which is unique in the segment, the pitch of which is set to one of three different angles depending on the driving situation and selected vehicle settings. It also generates additional downforce of up to 50 kg on the rear axle. Up to a speed of 170 km/h, the aerodynamic guide element – a central system component of the Porsche Active Aerodynamics (PAA) – stays in its retracted position at an angle of minus seven degrees to follow the roof line, which slopes to the rear. 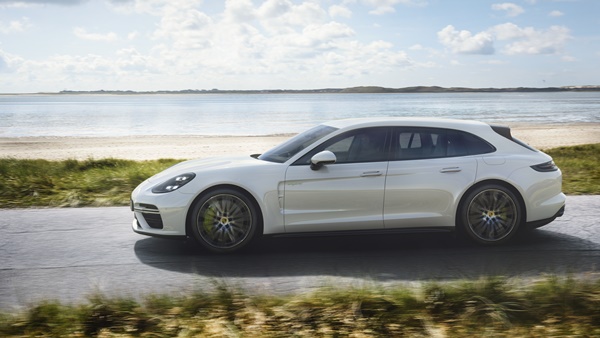 Conceptually, the top-of-the-line model offers all of the advantages of the new Sport Turismo range resulting from the avantgarde design. The roof line of the Sport Turismo is raised in comparison to the sports saloon allowing easier entry and exit at the rear along with greater head clearance. The usability of the luggage compartment benefits from the electrically operated wide opening tailgate with its load height of just 628 millimetres.

The Panamera Turbo S E-Hybrid Sport Turismo is also equipped with three rear seats. The two outside seats take the form of individual seats – in keeping with the model line’s claim for sporty performance with maximum passenger comfort – thereby producing a 2+1 configuration at the rear. Two electrically adjustable individual seats for the rear are available as an option.

Measured to the upper edge of the rear seats, the Panamera Turbo S E-Hybrid Sport Turismo offers 425 litres of storage space. The backrests of the three rear seats fold down together or individually (in a 40:20:40 split) and are unlocked electrically from the luggage compartment. In this case, the loading volume increases to up to 1,295 litres. 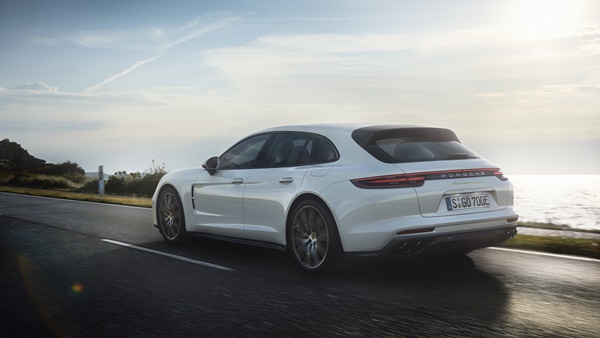 * Prices are recommended retail prices before statutory and dealer delivery charges, which vary from State to State.

** Fuel Consumption
Consumption figures are not reflective of real world driving conditions. Consumption figures are per the New European Driving Cycle (NEDC) test cycle ) in accordance with the Euro 5 and Euro 6 (715/2007/EC and 692/2008/EC) measurement method and should be used for comparative purposes only. The figures do not refer to an individual vehicle nor do they constitute part of the offer. Higher equipment levels may affect consumption and performance.

About Rob Fraser 1506 Articles
Rob Fraser – General dogsbody & Director Rob is the founder of the business. He constantly mutters something about way too many red wines one evening being to blame. Often known for taking the 4WD in the driveway over the sports car, he has travelled pretty much everywhere in Australia and when he is bored goes for a drive. He first learned to drive on the farm in a left hand drive WW11 Jeep when he was 11, and was hooked on 4WDriving way back then. In addition to 4WD he is an avid motoring enthusiast and has maintained a strong interest in the industry ever since his teens. He has owned way too many cars in his time as well. Having previously lived at the top of corporate life he retired in 2000 and hasn’t put a suit and tie on since. Cars are his passion so why not have a business doing what you love he figures. He has towed either a caravan or camper trailer to most parts of Australia, has run guided tours for camper trailers’ and instructed drivers in off road towing.
Website

BMW 530d sedan is everything the larger 750 il is but in a smaller package. It exudes luxury and ambience and prestige. At over $114,000 it isn’t cheap but seems good value. The BMW 530d is luxurious and fun on the road. [Read More]