Porsche owes him not only the Porsche 911’s air-cooled, six-cylinder boxer engine, but also the overall construction of the 917 and its twelve-cylinder engine as well as his creation of the TAG Turbo Formula One engine. For more than three decades, Hans Mezger was responsible for Porsche’s most successful racing cars and engines.

“The news of his death represents a very sad loss for us. Our thoughts are with his family,” said Michael Steiner, Member of the Executive Board, Research and Development. “We thank Hans Mezger for his extraordinary engineering achievements, which he has done for motorsport in general and for Porsche in particular. His innovations for our series sports cars will remain unforgotten forever.”

Hans Mezger was born on 18 November 1929 in Ottmarsheim, a small village near Ludwigsburg on the outskirts of Stuttgart. The youngest of five children, his parents ran a country inn. Art and culture were very important to the Mezger household. From an early age, aeroplanes and flying also fascinated the young Hans, and he occasionally undertook a trip to Kirchheim/Teck with a group of gliding enthusiasts from his neighbourhood. 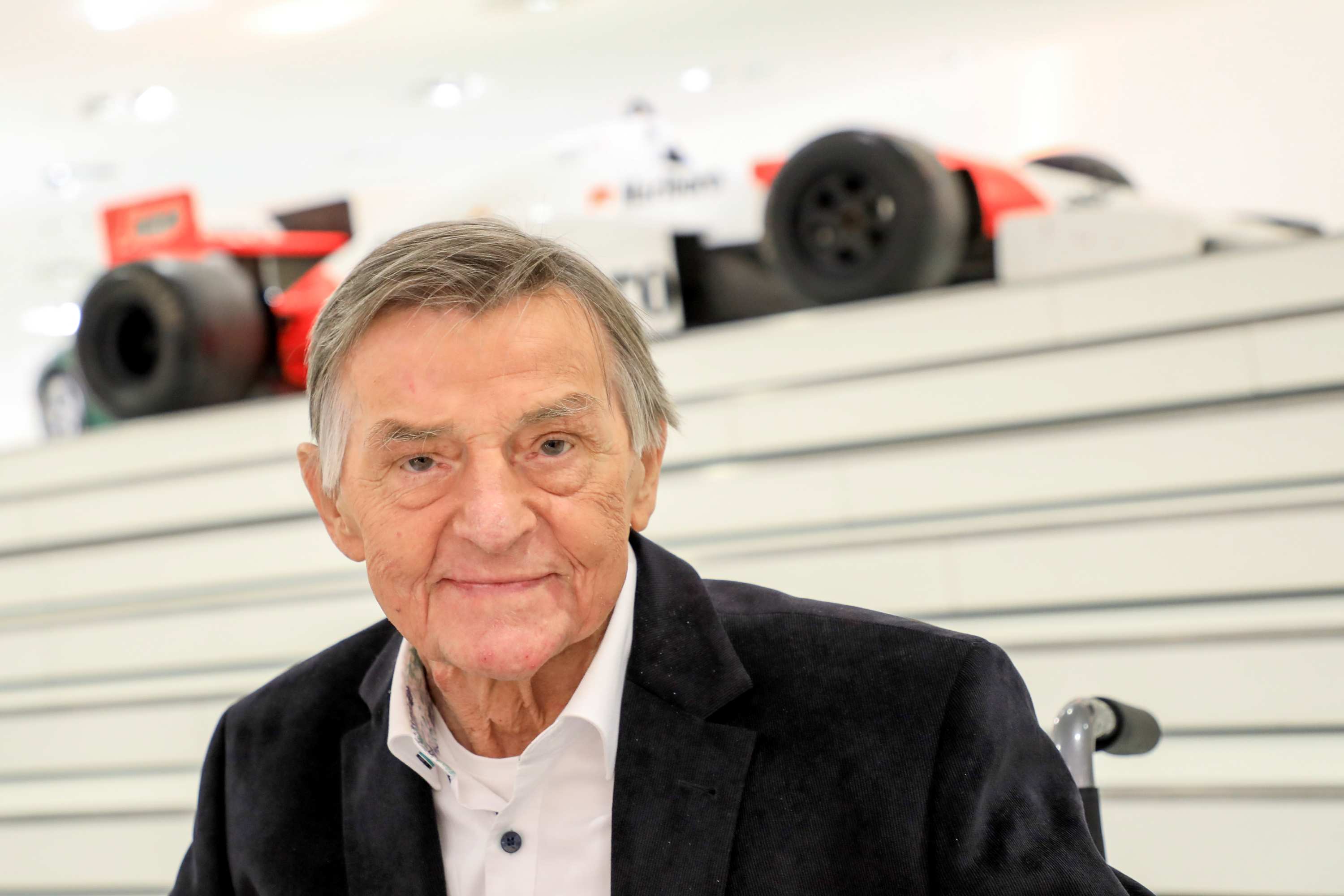 In the midst of his childhood, the Third Reich and Second World War emerged. On 18 April 1945, just three weeks before the end of the war, the 15-year-old Hans Mezger only escaped being enlisted by a stroke of luck and a faked medical certificate from a German commander. Eventually, Mezger continued his grammar school studies in Besigheim through the 6th grade, then followed by German A-levels in Ludwigsburg. “In 1946, I experienced my very first car race. It was at Hockenheim where old pre-war race cars lined up, along with Hans Stuck, whom I photographed with my old camera,” Hans Mezger described his first motorsport experience immediately after the Second World War.

Hans Mezger decided to study mechanical engineering at the Technical University, now the University of Stuttgart. However, at this time the universities were very crowded because the young men who had returned from the war were given preferential treatment for admission. Hans Mezger used the university requirement for a twelve-month internship to practise numerous stages such as machining, welding, model making and a few weeks in the grey cast iron and aluminium foundry.

“At that time I was riding a motor scooter, an NSU Lambretta. Apart from my brother’s 250 cc DKW it was my first and last motorised two-wheeler. I rode the Lambretta until 1960, when I bought my first car, an old and quite worn-out 356. It was not until years later that I came into contact with motorised two-wheelers again, when in the late 1970s it became necessary to develop new motorcycle engines for Harley-Davidson.” 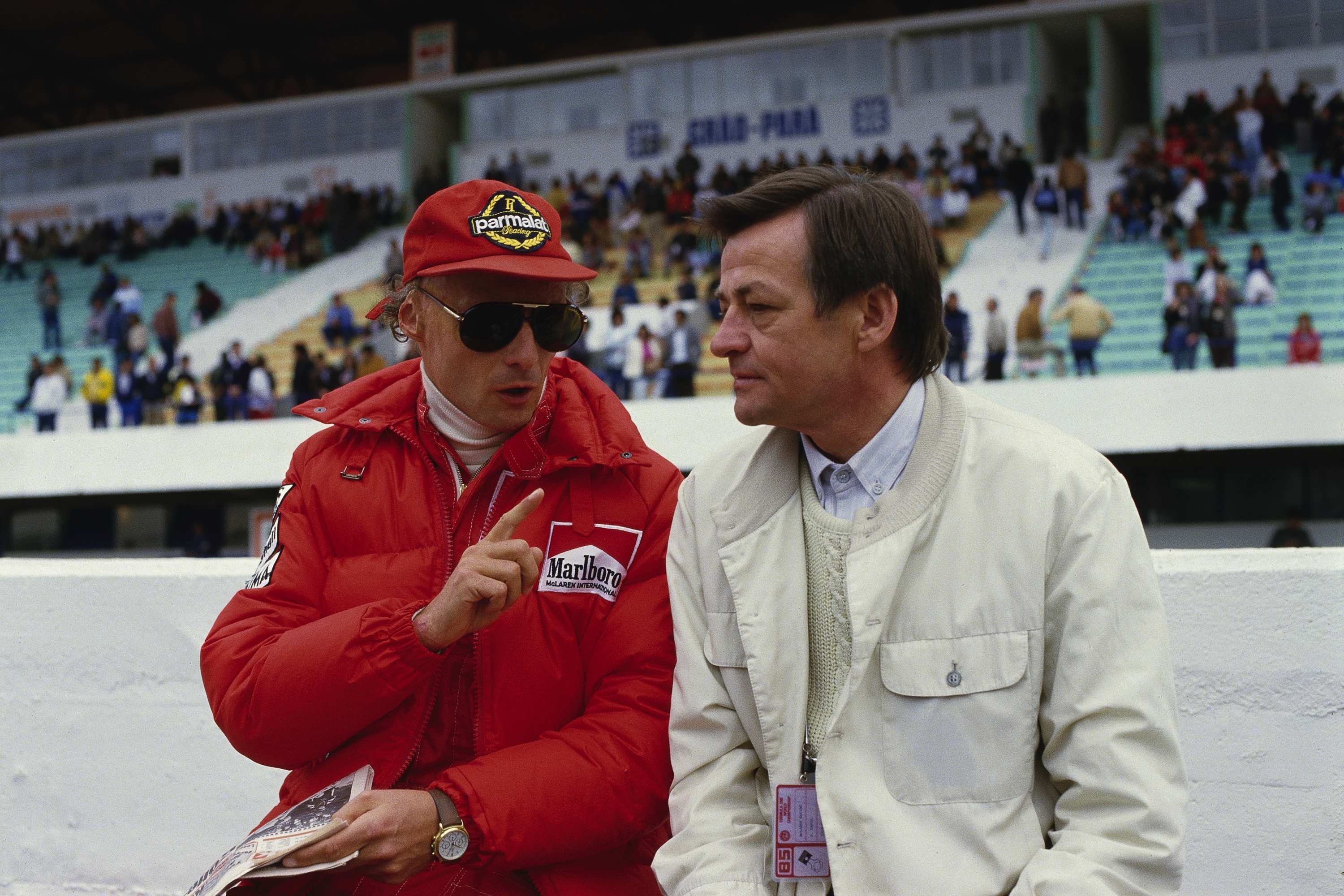 Mezger joined Porsche on 1 October 1956 in the calculation department.

After graduating in 1956 at the time of the German economic miracle, there was a veritable flood of job offers. “There were 28. But Porsche was not among them. I wanted to join Porsche because the Type 356 sports car inspired me. So I applied, got an interview, and the company offered me a job in diesel engine development. Until then, I didn’t even know that Porsche had such a thing. But I envisioned working on sports cars. They showed understanding and that’s how I started in the calculations department at Porsche,” said Hans Mezger about his start at the Zuffenhausen sports car manufacturer. A little later in 1958, Hans Mezger and his wife Helga got married. This was followed by the move to their first flat together in Ludwigsburg and, shortly afterwards, their two children, Daniela and Oliver.

Things then began happening one after the other. Hans Mezger gained his first experience with the four camshaft engine Type 547, developed a formula for calculating cam profiles and became part of Porsche’s first Formula 1 project in 1960. He was involved in the development of the 1.5-litre eight-cylinder Type 753 as well as the corresponding chassis of the 804. “On this Formula 1 project I also learned a lot about the design of combustion chambers. This also directly benefited the design of the 6-cylinder boxer engine for the later 901/911. Ferry Porsche, with his visionary leadership of the company, his human qualities, dignity and great dedication, became my role model. I wholeheartedly shared his philosophy of racing in order to build the best sports car for the road, was impressive and had a lasting impact on myself and my work during the entire period I spent at the company,” he reported from that early era at Porsche. 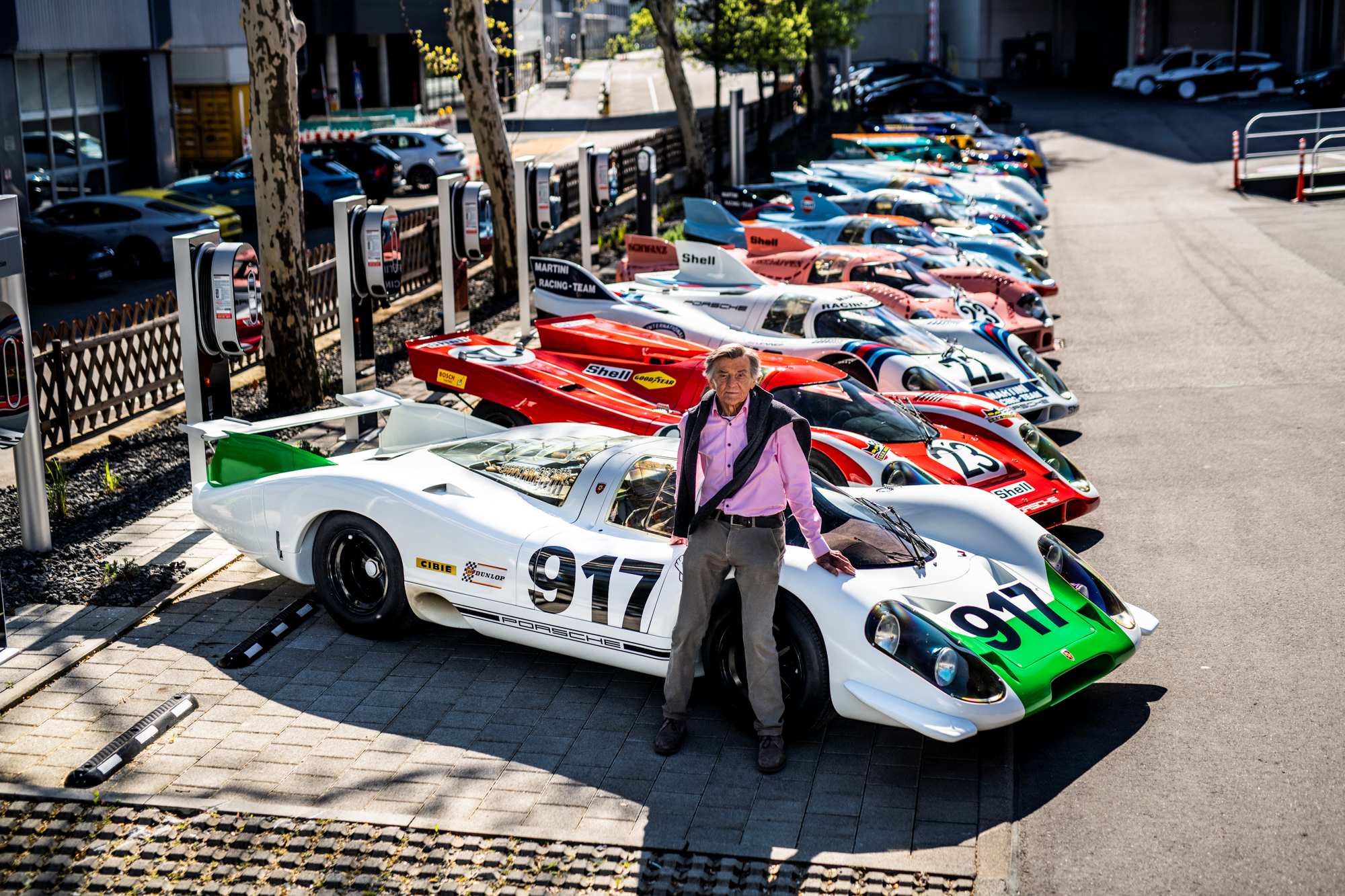 His career included designing the world-famous ‘Mezger engine’ for the 901 and 911 in the early 1960s. In 1965 Mezger was promoted to head of the department for race car design initiated by Ferdinand Piëch. This department was the key to a new quality and dynamism in motorsport for Porsche. It was an exciting, fascinating time in the mid-1960s. “Sometimes we also worked around the clock – like in 1965 when we created the Ollon-Villars Bergspyder in just 24 days and shortly thereafter the 910.” With its construction of a tubular frame, fibreglass body and design for new Formula 1 tyre technology, it became the blueprint for all the race cars that were built in the years to follow. 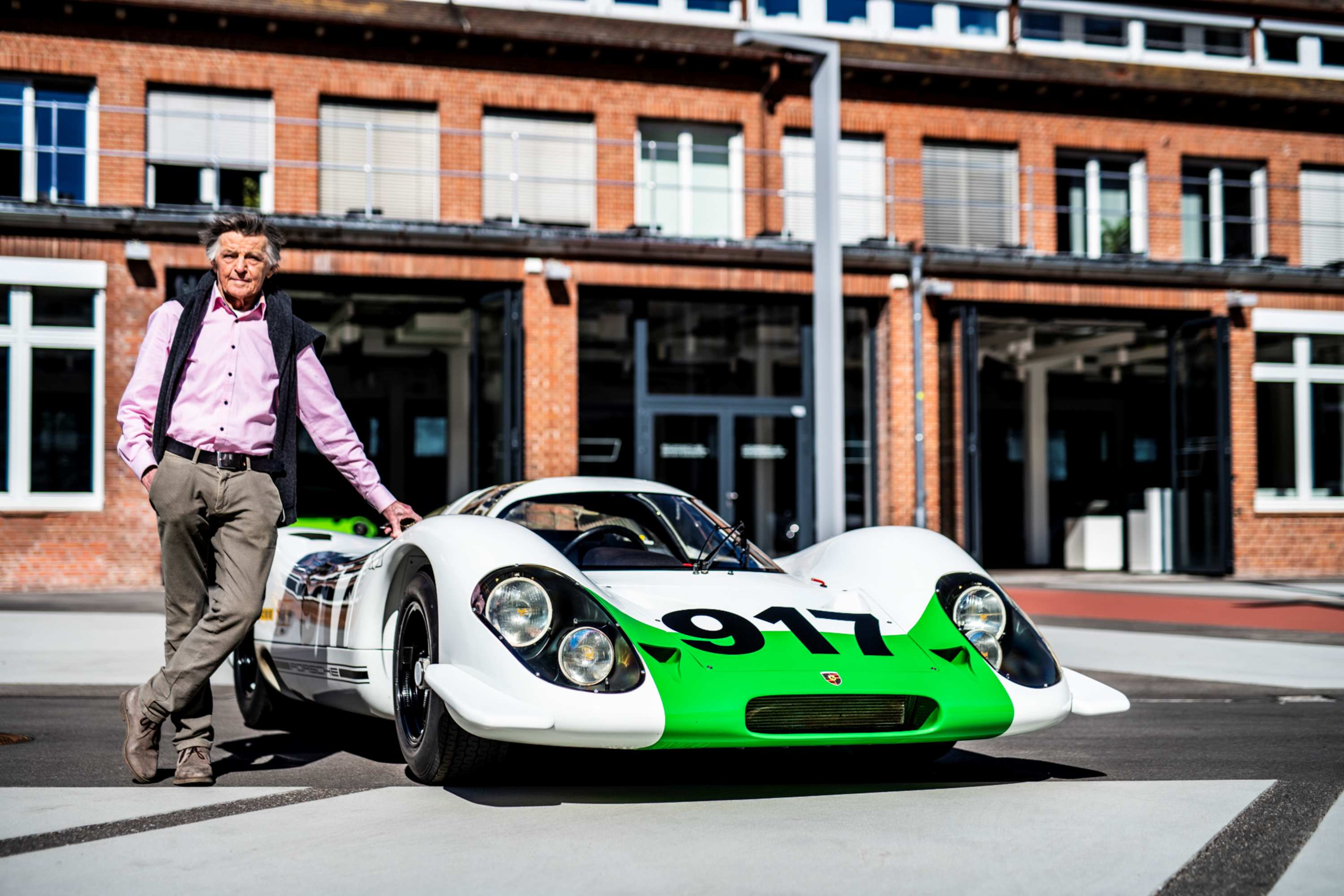 Porsche also relied on this design principle for the development of the 917 in 1968. With the 917, the first overall victory for Porsche at Le Mans was now finally possible, and once again Ferdinand Piëch relied on the skilfulness of Hans Mezger, who was responsible for the overall construction of the vehicle and its 12-cylinder engine. The 917 dominated at Le Mans and in the World Sportscar Championship in 1970 and 1971. In 1972 and 1973, and right from the start, the 917/10 and 917/30 showed good responsiveness even on the curvy stretches of the CanAm series, thanks to a novel exhaust turbocharging technology developed by Porsche itself. For the first time, turbocharging was successfully given a responsiveness that allowed racing cars and series-production vehicles to be used on all race tracks and public roads. A technology that makes Porsche a pioneer in this field and Mezger and his team brought to series production in 1974 in the form of the 911 Turbo. Many other victorious developments followed: for the 24 Hours of Le Mans, the World Sportscar Championship and the US Indy series.

But perhaps the most outstanding project took off in 1981 when Ron Dennis and his McLaren racing team set out in search of a powerful turbo engine for Formula 1. In the end, Porsche was chosen and the decision was made to design and build a completely new engine, as well as to provide on-site support during the races. Again, Hans Mezger was the creative mastermind behind the 1.5-litre, V6 engine with an 80-degree bank angle, which would later produce more than 1000 PS (horsepower). In 1984, Niki Lauda became world champion with it, and again in 1985, followed in 1986 by Alain Prost. The TAG Turbo won a total of 25 races, plus the two Constructors’ World Championships in 1984 and 1985. “This was a resounding success and also the most significant development contract for Porsche from an external company.

His commitment to Porsche has made him reject all offers from other manufacturers throughout his career and he still owned his 911 Carrera 3.0 in Grand Prix white – a coveted Porsche classic which has ‘his’ engine. His loyalty and connection to Porsche was unbroken. He was available to journalists, technicians and interested fans as a discussion partner. The Porsche Museum hosted a celebration for his 90th birthday with family, friends and former companions. He accompanied Porsche at events, trade fairs and festivities until the very end.

Mezger Career and highlights at Porsche

1956–1960 Technical calculation department in the design department. Responsible for valve control of all engines, among other things.

1960–1962 Move to the Porsche Formula 1 project team. Collaboration in engine and chassis design.

1963 Design of the 901/911 engine. Responsible for design and further development of all racing engines.

1974–1976 Design, development and further development of six-cylinder turbo engines and the Type 935 and 936 race cars.

1977–1978 Development of the water cooling and four-valve concept for the Type 935 and 936 six-cylinder turbo engines.

1981–1987 Design, overall project management and further development of the ‘TAG-Turbo – made by Porsche’ Formula 1 engine.

1974 The Starley Premium Award (GB) for the best automotive presentation of the year on the Porsche Type 917.

1984 Behind the Scenes Award (USA) for the development of the TAG Turbo Formula 1 engine.

1984 Trofeo Colin Chapman (I) for the development of the TAG Turbo Formula 1 engine.

1984 Trophée de L’Exploit (F) for the development of the TAG Turbo Formula 1 engine.

1984 Caschi d’Oro (I) for winning the Formula 1 Constructors’ World Championship (presented to McLaren).

1985 Prof. Ferdinand-Porsche Award (A) of the technical university Vienna in recognition for the accomplishment of developing the combustion engine. Hans Mezger is still the only person from the Porsche company to have won this award.

1987 Médaille Spéciale (F) for the development of the TAG Turbo Formula 1 engine.

Porsche introduces the 718 GTS in both Boxster and Cayman