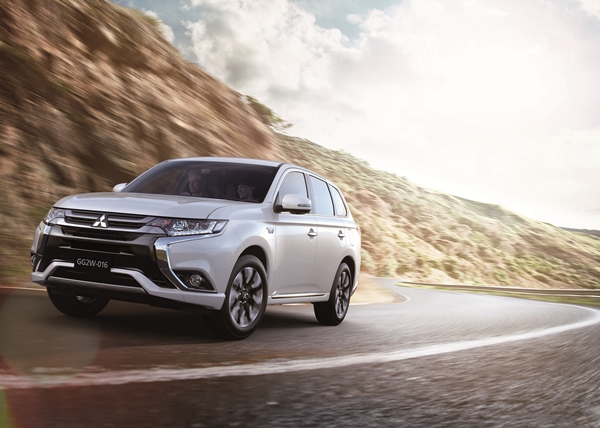 The upgrades are in-line with the substantial mid-life changes to Mitsubishi’s recently released 2016 Outlander, which delivered a smoother, more responsive on-road performance with improvements to quietness, steering performance, ride and handling.

Further to this, changes to the 2016 Outlander PHEV are designed to deliver better hybrid fuel efficiency and acceleration feel and throttle response, while cosmetic improvements – including design features unique to PHEV – give Mitsubishi’s flagship electric vehicle a more upmarket, high-grade appearance inside and out.

The 2016 upgrades have been announced for the Japanese domestic market, where the updated Outlander PHEV makes its global market debut in July. 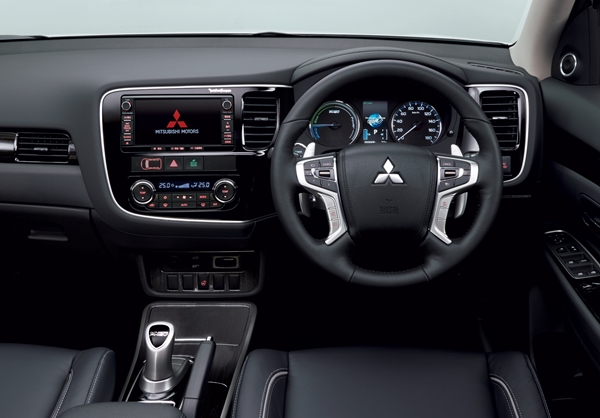 Just like the 2016 Outlander, the new plug-in hybrid version of Outlander features Mitsubishi’s striking “dynamic shield” front design concept.  However, the PHEV model is distinguished by bumper extensions, side garnish and exterior decoration designed to evoke a high-quality, sporty impression.

The exterior design is enhanced with a new 18-inch alloy wheel exclusive the PHEV models, with two-tone machined and black gloss finishes.

The Outlander PHEV exterior colour range has been expanded with new colours including Ruby Black Pearl and Quartz Brown metallic.

Outlander PHEV’s 2016 interior is styled to create a luxurious and high-quality cabin space.

The redesigned seats feature new trim with accent stitching, which is repeated in the padded door trim inserts.  The seats use styled padding and trim lines which follow the shape of the occupant’s body to provide superior fit and comfort for front and rear passengers.

The premium quality of the interior is reinforced in the all-new four-spoke steering wheel design, which is trimmed with seamless, fine-quality leather for a comfortable grip, and silver steering-wheel mounted controls with a chrome finish.

The instrument cluster is trimmed with accent stitching, while the newly designed large centre console uses a finish to reflect the elegance of Japanese black lacquer used in traditional Japanese craftwork.  Black stream patterns and lustrous accents feature in the dashboard and door trim ornament panels.

A power-adjusted driver’s seat becomes standard on all trim levels, and most variants gain the heated steering wheel function.

In addition to 2016 Outlander general improvements to NVH, steering, ride and handling, Mitsubishi Motors has increased the fuel efficiency of Outlander’s plug-in hybrid system by reducing engine friction and overall system optimisation.  This represents improved hybrid fuel efficiency of 8 per cent with an official figure of 20.2km/l (JC08 mode).

Meanwhile, improvements to electric motor efficiency have extended the 2016 Outlander PHEV’s all-electric range by 0.6km to 60.8km based on JC08 mode.

Launch feel or acceleration from a standing start and overall throttle response has improved with revisions to the plug-in hybrid EV and motor control systems.

The 2016 model introduces new safety technology features, including Unintentional Move Off Control system and Multi-around View Monitor, which gives the driver a bird’s-eye view of the vehicle to assist with parking or negotiating tight spaces.

Unintentional Move Off Control system mitigates impact damage by controlling speed in reverse or forward gear when a driver presses the accelerator by mistake and inadvertently moves toward another vehicle or obstacle. This feature is a factory option on some models.

The 2016 Outlander PHEV will be introduced to the Japanese domestic market on 9 July and rolled out progressively to new and existing markets across the globe.

About Anthony Hood 121 Articles
Anthony is an avid motor enthusiast. His interests lie in street rods, drag racing, 4WDriving and camping, burn out competitions, circuit racing and hill climbs. He is our resident hoon. Married with two children and a qualified diesel mechanic and fitter he brings a very laid back approach to reviewing vehicles.