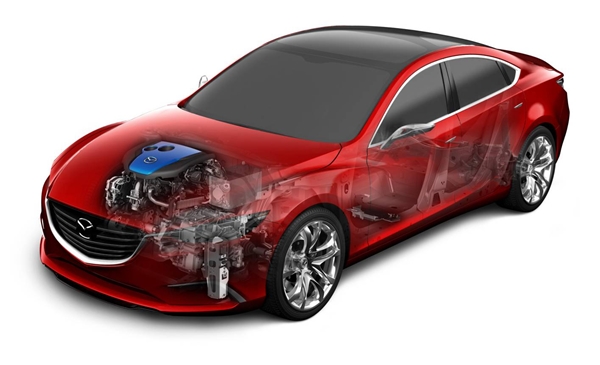 Mazda’s regenerative braking system is unique because it uses a capacitor, which is an electrical component that temporarily stores large volumes of electricity. Compared to batteries, capacitors can be charged and discharged rapidly and are resistant to deterioration through prolonged use.

‘i-ELOOP’ efficiently converts the vehicle’s kinetic energy into electricity as it decelerates, and uses the electricity to power the climate control, audio system and numerous other electrical components.

Mazda examined automobile accelerating and decelerating mechanisms and developed a highly efficient regenerative braking system that rapidly recovers a large amount of electricity every time the vehicle decelerates. Unlike hybrids, Mazda’s system avoids the need for a dedicated electric motor and battery.

‘i-ELOOP’ features a new 12-25V variable voltage alternator, a low-resistance electric double layer capacitor and a DC/DC converter. ‘i-ELOOP’ starts to recover kinetic energy the moment the driver lifts off the accelerator pedal and the vehicle begins to decelerate. The variable voltage alternator generates electricity at up to 25V for maximum efficiency before sending it to the Electric Double Layer Capacitor (EDLC) for storage.

The capacitor, which has been specially developed for use in a vehicle, can be fully charged in seconds. The DC/DC converter steps down the electricity from 25V to 12V before it is distributed directly to the vehicle’s electrical components.

The system also charges the vehicle battery as necessary. ‘i-ELOOP’ operates whenever the vehicle decelerates, reducing the need for the engine to burn extra fuel to generate electricity. As a result, in “stop-and-go” driving conditions, fuel economy improves by approximately 10 percent.

The name ’i-ELOOP’ is an adaptation of “Intelligent Energy Loop” and represents Mazda’s intention to efficiently cycle energy in an intelligent way.

‘i-ELOOP’ also works in conjunction with Mazda’s unique ‘i-stop’ idling stop technology to extend the period that the engine can be shut off.

Mazda is working to maximize the efficiency of internal combustion engine vehicles with its groundbreaking SKYACTIV TECHNOLOGY. By combining this with i-stop, i-ELOOP and other electric devices that enhance fuel economy by eliminating unnecessary fuel consumption, Mazda is striving to deliver vehicles with excellent environmental performance as well as a Zoom-Zoom ride to all its customers.

Mazda Motor Corporation has revealed the Mazda MX-5 RF (retractable fastback). The latest addition to the MX-5 family fully embodies the model’s 26-year-old tradition of “lots of fun”. In Australia, the model will feature the SKYACTIV-G 2.0 petrol engine. [Read More]

Later this month the New Mazda BT-50 arrives with refreshed exterior styling and new features, but with only a minor price adjustment. Launched in October 2011, the current BT-50 has gone through its first design revision with changes to the front and rear of the vehicle and a range of new interior upgrades included. [Read More]

One of the best things you can do for the environment is to reduce your car’s emissions. a greener vehicle also offers improved performance [Read More]