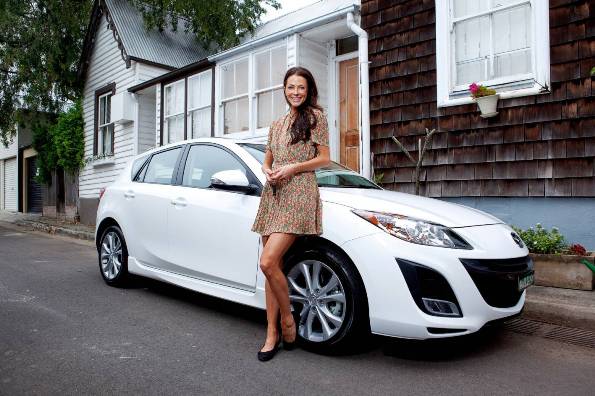 Mazda Australia is pleased to welcome Home and Away star and former model Esther Anderson to the Mazda family with a sporty and stylish Mazda3 SP25.

Esther began her television career as a key presenter on the popular Victorian-based travel show, Postcards. Whilst she has enjoyed a varied career, Esther is probably best known for her role as Charlie Buckton on the television drama series, Home and Away. She also captured the attention of Australian audiences during her recent lengthy run on Dancing with the Stars, where she narrowly missed out on winning the competition.

In 2010, Esther’s work in television was recognised with a Gold Logie nomination for Australia’s most popular personality and a Silver Logie nomination for the most outstanding actress. She has also been involved with a number of charity organisations, lending her name to the Royal Children’s Hospital Good Friday Appeal and the Leukaemia Foundation’s World’s Greatest Shave.

Esther’s vibrant personality and eye for all things stylish make her a perfect fit for the Mazda brand. In what is sure to be a head turning combination, Esther can be seen exploring the sights and sounds of her hometown Sydney and beyond in her sporty and stylish Mazda3 SP25.

“I am very pleased to be working with Mazda, a brand which is known for making cars that are both stylish and fun to drive. The Mazda3 SP25 is really the perfect car for me. It’s big enough for weekends away with friends and has all the features that I’d look for. I particularly like the Sat Nav system and the Bluetooth which not only lets me make calls whilst driving but also enables me to have a wireless connection to my iPod.” said Esther.