The Mazda RX-8 SP and Mazda3 MPS will take to the hills of Regional Victoria to challenge the competition at the 2010 Targa High Country tarmac rally from November 5th to 7th.

As the newest event on the Australian tarmac rally calendar, Targa High Country promises to deliver plenty of high-octane racing as the capacity field of 220 competitors wind their way through the Victorian Alps, King Valley Wine region and Eildon National Park.

As the only Victorian multi-stage tarmac rally, Targa High Country is sure to generate plenty of excitement and enthusiasm throughout the region.

The event represents the first opportunity for the new turbo-charged RX-8 SP to make its eagerly awaited racing debut. In addition to rebuilding the RX-8 SP that was knocked out of Targa Tasmania earlier this year when it collided with another car stopped on the stage, Mazda Motorsport has also been busy building a new Mazda RX-8 SP. 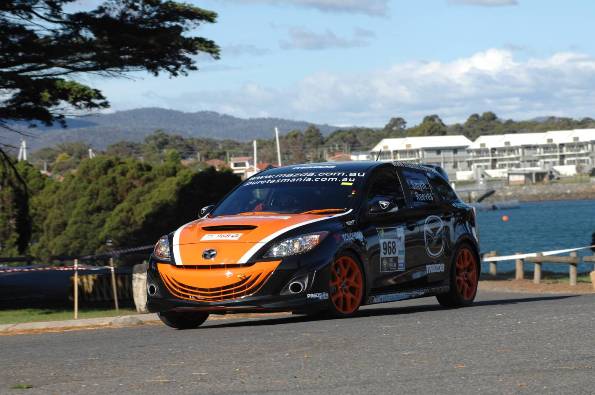 Many months of preparation have gone into perfecting the new RX-8 SP and the Mazda Motorsport Team have high expectations for the new vehicle which will run on low-emitting E85 ethanol blend fuel. Derived from sugar cane crops, ethanol produces less than half the CO2 emissions of petrol. But while offering obvious benefits to the environment, E85 also helps to enhance performance through its natural cooling properties.

Driver Steve Glenney and co-driver Bernie Webb are looking forward to stepping into Mazda’s new rotary rocket where they will be competing for outright honours, up against some strong competition from the Nissan GT-R, a brace of Porsches and the twin Lamborghini Gallardos. “We were very impressed with the way the RX-8 SP handled the demanding road conditions in Tasmania. The RX-8 SP’s supremely balanced chassis and outstanding braking ability should be perfectly suited for the roads at Targa High Country” said Glenney.

An impressive performance at Targa Tasmania earlier this year saw Brendan Reeves and his co-driver Rhianon Smyth achieve a first place ranking for the Mazda3 MPS in the 2WD Showroom category and a ninth outright. This outstanding performance places the Mazda3 MPS as one of the favourites competing in the hotly contested Showroom Class at Targa High Country. In order to compete in the Showroom Class, the Mazda3 MPS has undergone only minor modifications and Mazda hopes a positive performance will further illustrate the brilliant capabilities of this hot hatch.

Brendan Reeves is fresh from an outstanding result at the Pirelli Star Driver Shootout in Spain where he was selected as one of the world’s best six young rally drivers earning himself a place in the prestigious 2011 WRC Rally Academy. “I’m still pinching myself” said Reeves of the result but with one eye on Targa High Country he added “Rhianon and myself are both looking forward to getting back into the Mazda3 MPS. Our last outing with Mazda was Targa Tasmania and we’re hoping to put in another strong performance for the whole Mazda Motorsport team.”

With 17 stages, over a total course length of 849km, Targa High Country will no doubt provide for some spectacular driving and hot competition. Keep up to date with all of the latest news from Targa High country at http://www.mazdamotorsport.com.au