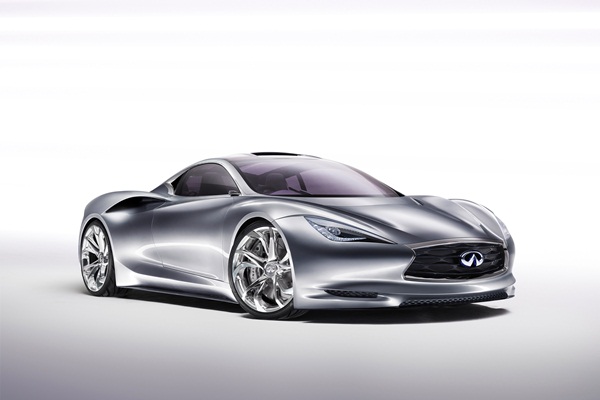 In addition, Infiniti confirmed the limited production of 200 units of the 420PS FX Sebastian Vettel version for Europe and Middle East markets, as well as the reduction of emissions of its world record holding Infiniti M Hybrid model to 159g/km.

The INFINITI EMERG-E Concept, which makes its debut at the Geneva Motor Show 2012, is a highly advanced mid-ship sports car that provides an exciting glimpse into Infiniti’s future.

INFINITI EMERG-E is physical proof of Infiniti’s intension to produce a bold halo model befitting the brand’s promise of Inspired Performance, and also signals an array of exciting new technologies that the brand will adopt in its quest to build dramatic and sustainable high performance cars. INFINITI EMERG-E also provides a fresh expression of Infiniti’s design language applied to a high performance, mid-ship sports car for the first time.

INFINITI EMERG-E is also significant for being the first Infiniti that has been developed in Europe. More than that, its advanced technology deliberately draws on the knowledge of suppliers beyond Infiniti’s usual base in the quest to uncover the most innovative hardware and the deepest knowledge base. That quest has seen Infiniti become a part of the UK government’s Technology Strategy Board initiative, whose aim is to speed the arrival of low carbon vehicles to our roads.

INFINITI EMERG-E is the ultimate expression of Infiniti’s inspired performance. This 402bhp (300kW) mid-engined, twin motor, electric motors powered sports car is capable of accelerating from 0-60mph in just four seconds – and from zero to 130mph in a single, seamless 30 second burst. Yet it also operates as exciting, zero emission urban transport over a 30-mile range. And when the range-extender petrol engine functions in concert with its twin electric motors, it produces a CO2 output of only 55g/km (NEDC cycle).

Within its compact 4.464m length the two-seater INFINITI EMERG-E contains a pair of electric motors, a lithium-ion battery pack, four inverters, a three-cylinder range-extending internal combustion engine and a petrol tank. All this is efficiently wrapped within highly aerodynamic, light bodywork characterised by a design fluency that could only come from Infiniti.

Infiniti today confirmed the FX Sebastian Vettel version, shown first in concept form at the 2011 Frankfurt Motor Show, is to enter a strictly limited production run of 200 units to be sold across Europe and Middle East regions. The announcement was made by Bernard Loire, Infiniti Vice President for Europe and the Middle East.

The production version will match the 420PS output of the concept car making it the most powerful Infiniti yet to be sold by the European business unit. Although no price is available yet, it will also be the most expensive.

The car is a collaboration between Red Bull Racing’s champion racing driver and global brand ambassador, Sebastian Vettel, and Infiniti’s Chief Creative Officer, Shiro Nakamura. With its sophisticated technology, lightweight components and features such as Rear Active Steering for maximum agility, the V8 FX50S Premium – Infiniti’s current flagship as well as its best-selling model in some markets – provides the ideal starting point for the FX Sebastian Vettel version.

Customer reservations are being taken now ahead of first deliveries from early 2013.

Electric cars now have to make strange noises by law

The rules do not cover motor bikes or scooters. A vehicle only needs to make a nois [Read More]