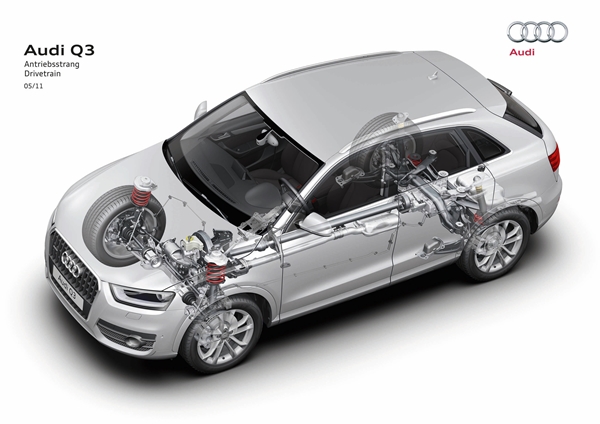 The Audi Q3 is a premium SUV in a compact-class form embodying sporty, efficient and versatile characteristics while still allowing drivers to experience a vehicle that is equally comfortable on or off the road.

The Q3 is immediately recognisable as the youngest member of the large Audi family. The coupe-like lines are an expression of its sporty character. The all new model offers customers the option to tailor many aspects to create a car that reflects their athletic and active lifestyle while providing ample space for 5 passengers.

The space continues through to the luggage compartment of the compact SUV has a capacity of 460 litres, which can be increased to 1,365 litres by folding down the split rear seat backs.

The Audi Q3 is being launched with a choice of three engines – one TDI and two TFSI units, with engine specifications for its Australian launch to be announced closer to the launch date. All three four-cylinder engines combine direct injection with turbocharging, and will feature not only an energy recovery system but also a start-stop system. With engines ranging from 125 kW to 155 kW, these engines are as efficient as they are powerful. Scheduled to appear somewhat later, the Q3 2.0 TDI with 103 kW and front-wheel drive will average less than 5.2 litres of fuel per 100 kilometres.

The advanced driver assist systems are taken from the luxury class models and include park assist programs and hard-drive navigation system MMI navigation plus.

The Q3’s rigid, safe and quiet occupant cell integrates a number of ultra-high-strength steels. Both the bonnet and the tailgate are made of aluminium. As is typical of the Q models from Audi, the undivided tail lights are integrated into the tailgate, which wraps around the pillars. At just 0.32, the coefficient of drag is unusually low. The compact SUV is 4.39 metres
long, 1.83 metres wide and 1.59 metres high. 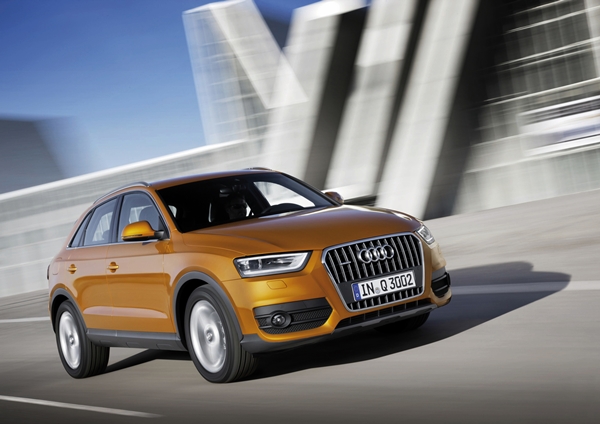 The Audi Q3 is being launched with a choice of three engines – one TDI and two TFSI units. All three four-cylinder engines combine direct injection with turbocharging, and will feature not only an energy recovery system but also a start-stop system. With power outputs ranging from 125 kW to 155 kW, these engines are as efficient as they are powerful. Scheduled to appear somewhat later, the Q3 2.0 TDI with 103 kW and front-wheel drive will average less than 5.2 litres of fuel per 100 kilometres.

Audi combines all three of the initial engines with quattro permanent all-wheel drive, which works with a hydraulic multi-plate clutch. The seven-speed S tronic is standard in all models equipped with the most powerful TDI and TFSI engines. The ultra-compact and fast-shifting dual-clutch transmission showcases an innovation that enhances efficiency even further. When coasting, it allows the Audi Q3 to free-wheel when the “Efficiency” mode of Audi drive select is active. Shift paddles on the steering wheel are optionally available.

The chassis of the Q3 – featuring a four-link rear suspension, electromechanical power steering and wheels measuring between 16 and 19 inches in diameter – is the fruit of great design labor. An electromechanical parking brake and hill hold assist are standard, with hill-descent assist to be available later. Audi drive select enables the driver to adjust various technology modules, including the optional active dampers, in four stages to suit his or her individual driving style.

The Audi Q3 went on sale in Europe in June and goes on sale in Australia in the second quarter of 2012. Local pricing and specification will be announced closer to the launch date. 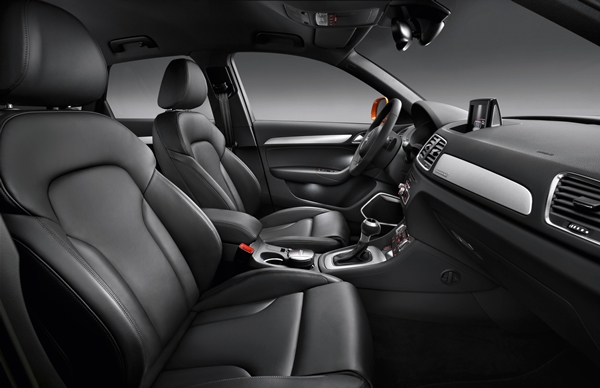 The Audi Q3 comes generously appointed with a long list of standard equipment. It also offers a choice of optional equipment taken directly from the luxury class, including the adaptive light system for the xenon plus headlights, the high-beam assistant, the panoramic glass roof, the LED interior lighting package and power-adjustable front seats.

The range of driver assistance systems redefines the compact SUV class. The park assist system maneuvers the vehicle into tight parking spots autonomously. All the driver has to do is apply the throttle and the brakes. The system also detects and warns the driver of obstacles to the sides. Audi side assist employs radar to help change lanes, and Audi active lane assist makes slight steering corrections as necessary to help stay in the lane. The speed limit display recognises and presents important traffic signs.

Small urban SUVs are increasingly popular amongst buyers. This is the case for the premium brands a swell. Rob Fraser has just spent a week in what he considers one of the best. [Read More]

VW Touareg was originally launched some 10 years ago and was a little long in the tooth of late lagging the competition. VW launched the all new version in June and Rob Fraser has just spent some time in one [Read More]

Subaru Australia has announced a significant price realignment of two new generation model ranges, offering savings of up to 25 per cent – or $14,000 – despite specification increases. [Read More]