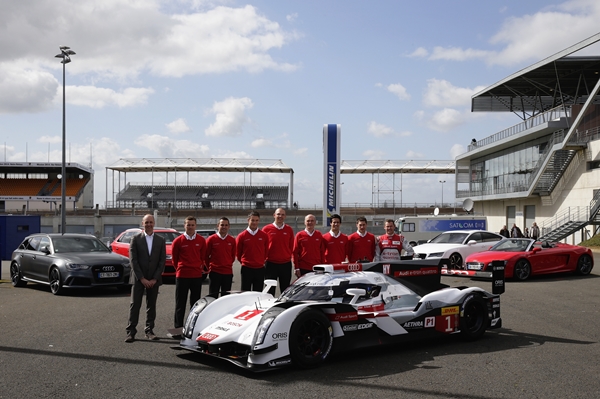 Audi began the 2014 WEC season with a spectacular appearance by the new Audi R18 e-tron quattro. Instead of doing it‘s initial kilometres at Le Mans on the legendary race track in Western France, Audi factory driver Tom Kristensen, with nine victories under his belt at the Le Mans 24 Hour Race, drove the diesel hybrid sports car from the Saint-Julien du Mans cathedral in the city centre to the famous race track.

Accompanied by TV cameras and photographers, and featured in a live worldwide broadcast on the internet, Audi’s new LMP1 race car completed the almost ten kilometre distance through the city in a motorcade, did a lap on the Circuit Bugatti and arrived in front of the race track’s modern Welcome Centre amid the applause of the invited international journalists and guests.

“I’ve been competing at Le Mans since 1997 but this was absolutely new for me, too, and very exciting,” said Tom Kristensen, who in 2006 had driven the revolutionary Audi R10 TDI on its world premiere – in Paris – in public traffic as well.

Aside from the unusual drive which brought back memories of a Le Mans era from the distant past when the drivers would arrive in their own race cars, Audi surprised the public with a new livery of the Le Mans car. While the body of the new R18 e-tron quattro was still black with red details when the car made its world debut in December, a striking new colour scheme now catches the eye. The new colour scheme of white, silver, red and black offers fresh, expressive graphics.

“The colours are symbolic,” explains Dirk van Braeckel, Design Manager Motorsport and Special Projects at Audi. “Silver emphasises the past success in racing. As a very quiet colour, it provides the base for our livery. White, as the second colour, harmonises well with silver and appears very light. It stands for the hybrid drive. White is used asymmetrically in order to symbolise the complexity of this powertrain technology.”
The contours are modeled after the conductive tracks on PCBs, but clearly featured as an abstraction.

The next colour is black. It is used for the front and rear wings, as well as on sections of the fenders and sides with highly defined geometric contours.

“We opted for matt black, as it nicely contrasts with the gloss white,” says van Braeckel. “Black stands for lightweight design. The black look of the large fin on the engine cover is intended to represent something like a backbone.”

An unique red – Audi’s performance colour – completes the graphics. Special characteristics include the reflecting surfaces of the elements, Audi’s logos and inscriptions that are exclusively applied to these areas, as well as the pronounced longitudinal orientation of the colour in the overall concept.

“The reflective livery is particularly impressive at night and provides the spectators with an enhanced experience,” explains van Braeckel. “Due to its longitudinal orientation the graphics express the speed that is so typical for Le Mans. Even the rims include a red segment. With the wheel rotations, it achieves a very dynamic effect.” 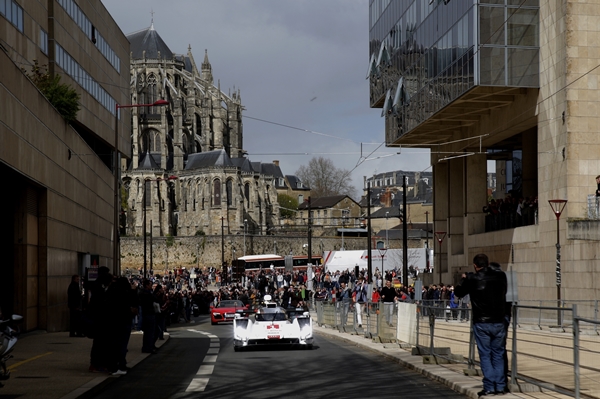 The Audi R18 e-tron quattro did not only cause a sensation on its drive through Le Mans due to its striking livery. At the beginning of a fundamentally new technological era, Audi published the key technical data of the race car’s powertrain as well. For instance, the cubic capacity of the V6 TDI power plant was increased from 3.7 to four litres in order to further optimise the engine that had already been very efficient.

After testing various energy recovery systems, Audi decided to compete in the class of up to two megajoules of recuperation energy at Le Mans. The energy exclusively flows through a motor generator unit (MGU) at the front axle and is stored in a flywheel energy storage system.

“We opted for this concept following extensive testing,” says Head of Audi Motorsport Dr. Wolfgang Ullrich. “In our opinion, it provides the optimum balance between efficient energy use, size, weight, energy conversion efficiency, responsiveness, driveability and a favourable operating strategy – combined with durability, which is the basic prerequisite for success at Le Mans.”

On 28-29 March, 2014, the Audi R18 e-tron quattro will be participating in the official test of the FIA World Endurance Championship (WEC) at Le Castellet (France) before the World Champion, Audi, begins its title defense at Silverstone in the UK on April 20.

Audi has announced the production of an exclusive, limited edition R8 V10 plus Neuburg Edition specifically developed for the Australian market. [Read More]