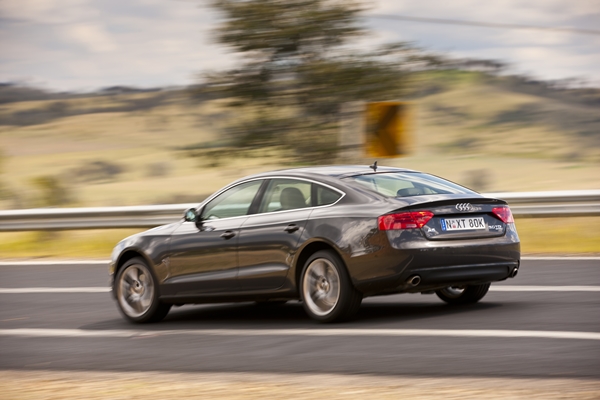 Audi has added further function to the A5 and A7 Sportback’s distinctive form by making five-seats standard across the range. Customers also benefit from additional equipment, while the A7 Sportback now boasts more power and torque.

The versatility of five seats is now available to A5 and A7 Sportback customers as standard equipment, with no price increase. Previously unavailable due to ADR development requirements, the feature is now standard on both models as part of the 2013 Model Year.

The six-cylinder A5 Sportback models also benefit from additional equipment as part of the MY13 changes, with a convenient memory function for the driver’s seat and fully featured electric mirrors (with heating, memory, auto dimming, folding and dipping for reverse) now standard.

The A7 Sportback models have revised engine outputs as part of the company’s continuous commitment to improved efficiency and performance. The 3.0 TFSI petrol gains 8 kW for a new peak power of 228 kW, while the 3.0 TDI diesel gains an additional 80Nm of torque, for a peak of 580 Nm. As part of this increase, the 3.0 TDI now comes standard with an eight-speed tiptronic automatic transmission.

Audi have just released an upgrade of their A4 and A5 Passenger vehicles. This review is just about the sedan and wagon. [Read More]

Audi A5 platform, engine, and transmission are used elsewhere in the VW group and the range is: a coupe, an a convertible, and a 5 door hatch. [Read More]

The New Audi A5 has Arrived in Australia

The new Audi A5 and Audi S5 model series has arrived in Australia. The design has been comprehensively refreshed and now features an electromechanical steering system for significant fuel efficiency gains. [Read More]