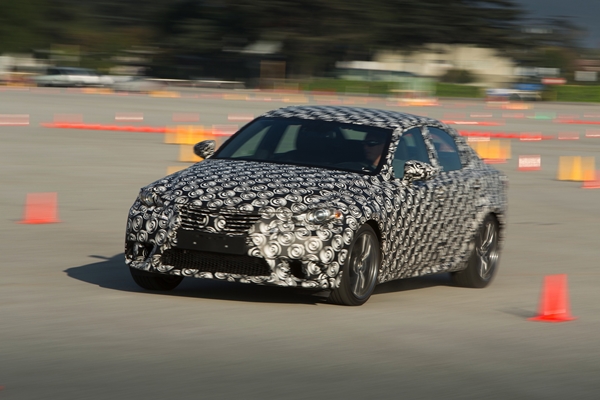 The all-new Lexus IS Line has accumulated over 1.6 million kilometres of testing and development – enough for two return trips to the moon. At the heart of the IS development process was the desire to ensure that all IS models maintained their outstanding dynamic capabilities while increasing overall space and comfort.

Testing of the all-new IS took place on the road, track and laboratory with the IS tested to breaking point in the ice and snow of the southern hemisphere, the heat of the northern hemisphere, along with the gruelling test bed of circuits such as the Nurburgring in Germany and Fuji Speedway in Japan.

Key to attaining the “fun to drive” characteristics of the new IS was a new development process that saw driving dynamics prioritised over all other functions, explained IS Chief Engineer Junichi Furuyama.

“The conventional approach to development would involve developing each of the individual aspects with ‘Fun to Drive’ as the outcome, much like a pyramid would be built by first constructing the foundation and then proceeding to build up from there,” he said.

“The problem with this approach is that there is no knowing whether it will result in achieving a ‘Fun to Drive’ experience.

“In contrast, development of the new IS flipped this process on its head.

“It called for first establishing the pleasurable driving experience users will sense as the peak of the pyramid, and then developing the individual performance elements to support it,” Mr Furuyama said.

The process resulted in the adoption of new body strengthening techniques, including laser screw weld and body bonding (25 metres of which is contained in the new IS), and a suspension system that delivers a 20 per cent increase in roll rigidity.

Lexus Australia has boosted its IS line performance credentials with the introduction of the powerful new IS 350 sedan.
[Read More]

The brand new Lexus IS 350 is making a statement and a bold one at that. Lexus is bringing sexy back! [Read More]