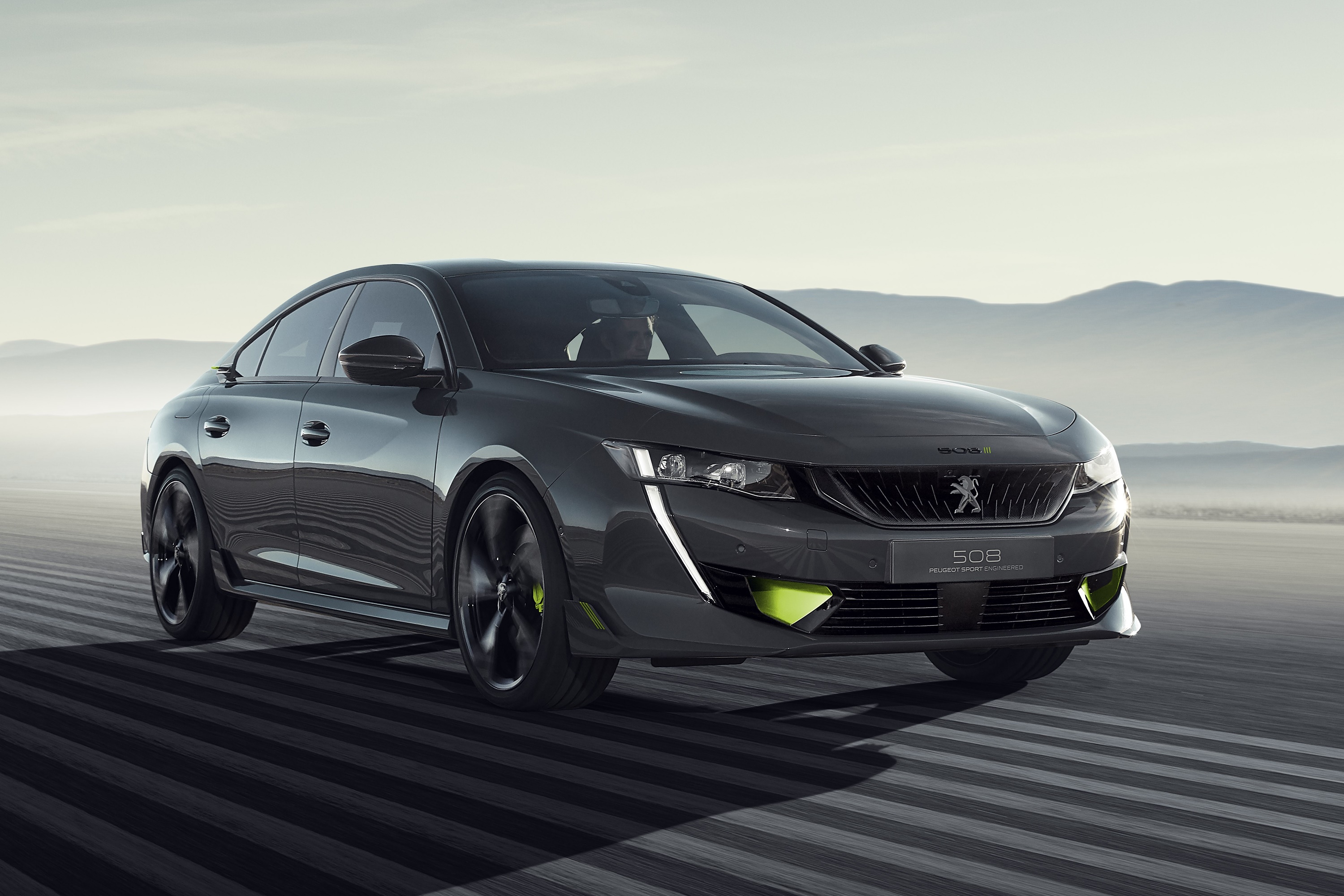 The experts at Peugeot Sport took the all-new 508 Hybrid as a starting point and enhanced its design, performance and efficiency. With an advanced PureTech 200 engine and 110bhp electric motor driving the front wheels and a separate 150kW (200bhp) electric motor powering the rear wheels, the four-wheel drive 508 Peugeot Sport engineered can accelerate from 0-62mph in 4.3 seconds and hit a mechanically limited top speed of 155 mph. 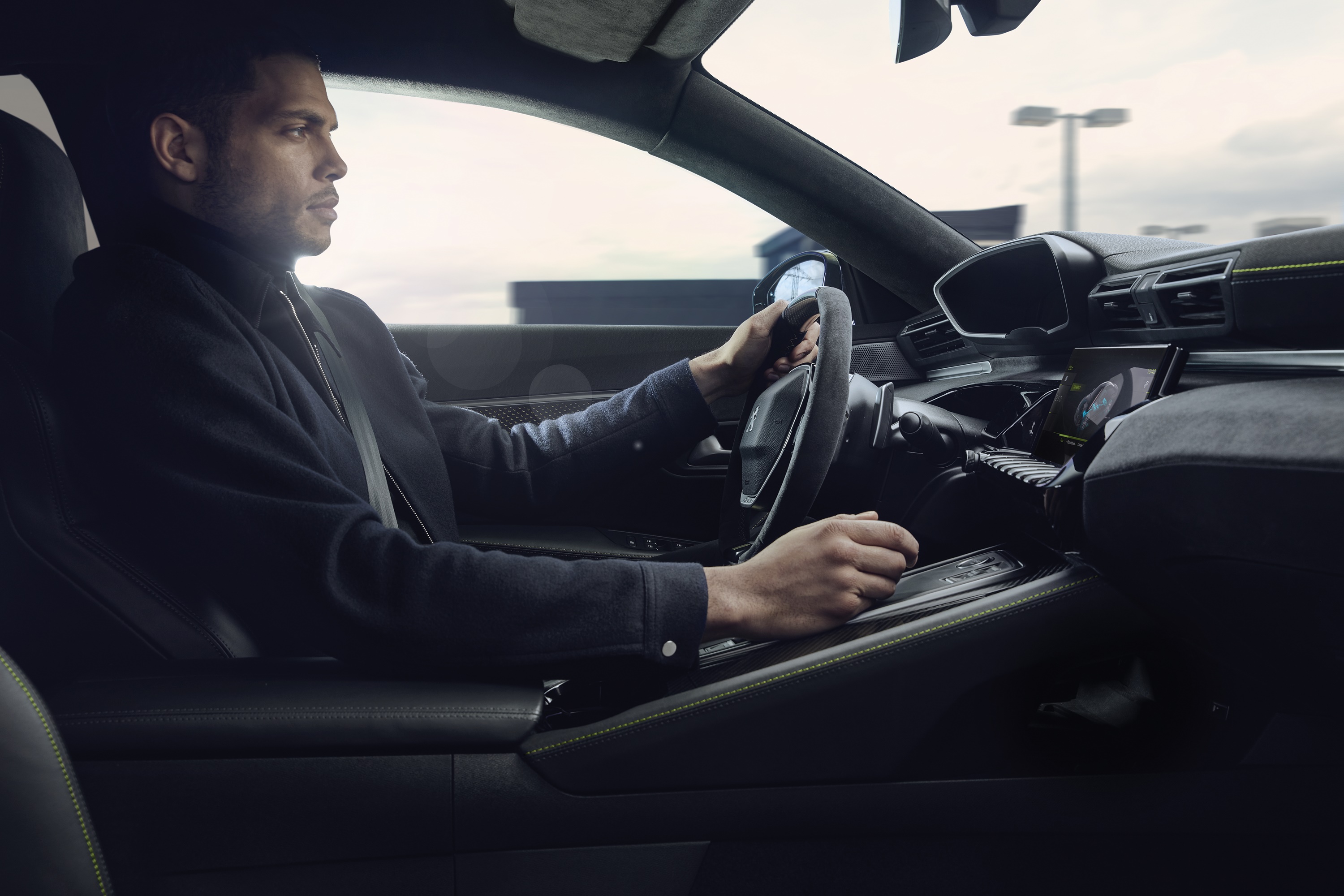 This electric performance is underpinned by an 11.8kWh battery, which gives the 508 Peugeot Sport engineered concept a zero-emission range of up to 31 miles when switched to 100% electric mode and CO2 emissions of 49g/km, on the WLTP test protocols, when in Hybrid mode.

When the concept car makes its world premiere at the Geneva International Motor Show, its redesigned front bumper, which incorporates a 3D-printed valance designed to direct incoming air towards the radiator and new rear diffuser, are just some of the exterior enhancements.

The 508 Peugeot Sport engineered concept car has enhanced aerodynamics, with flaps fitted to the subframes to reduce aerodynamic drag and streamlined winglets located on the quarter panels, where GT Line and GT monograms usually reside. This helps to smooth the flow of air.

Inside, the concept car is designed to maximise comfort and efficiency with a touch-sensitive gear lever fitted with an Alcantara® section and a sporty asymmetrical compact steering wheel covered in Alcantara® and carbon fibre inserts. The lower section of the compact steering wheel brings the design cues of the concept model straight to the driver’s fingertips with three Peugeot Sport engineered lines alternating in Kryptonite and Onyx Black overstitching.

The Alcantara® design continues through to the roof, A-pillars and quarter panels, providing excellent visibility augmented by the innovative Peugeot i-Cockpit®, which gives drivers intuitive access to the latest on-board technology. The cabin comes fitted with Kryptonite finishing around the door handles and dashboard, along with an all Kryptonite 10” capacitive HD touch screen and 12.3” head-up digital instrument display panel.

The innovative concept car marks the beginning of an important year for Peugeot, as it begins making the transition towards a fully electrified range. Peugeot has committed to providing an electrified version across its entire range by 2023, with the first commercial Battery Electric Vehicle (BEV) model set to arrive later this year. 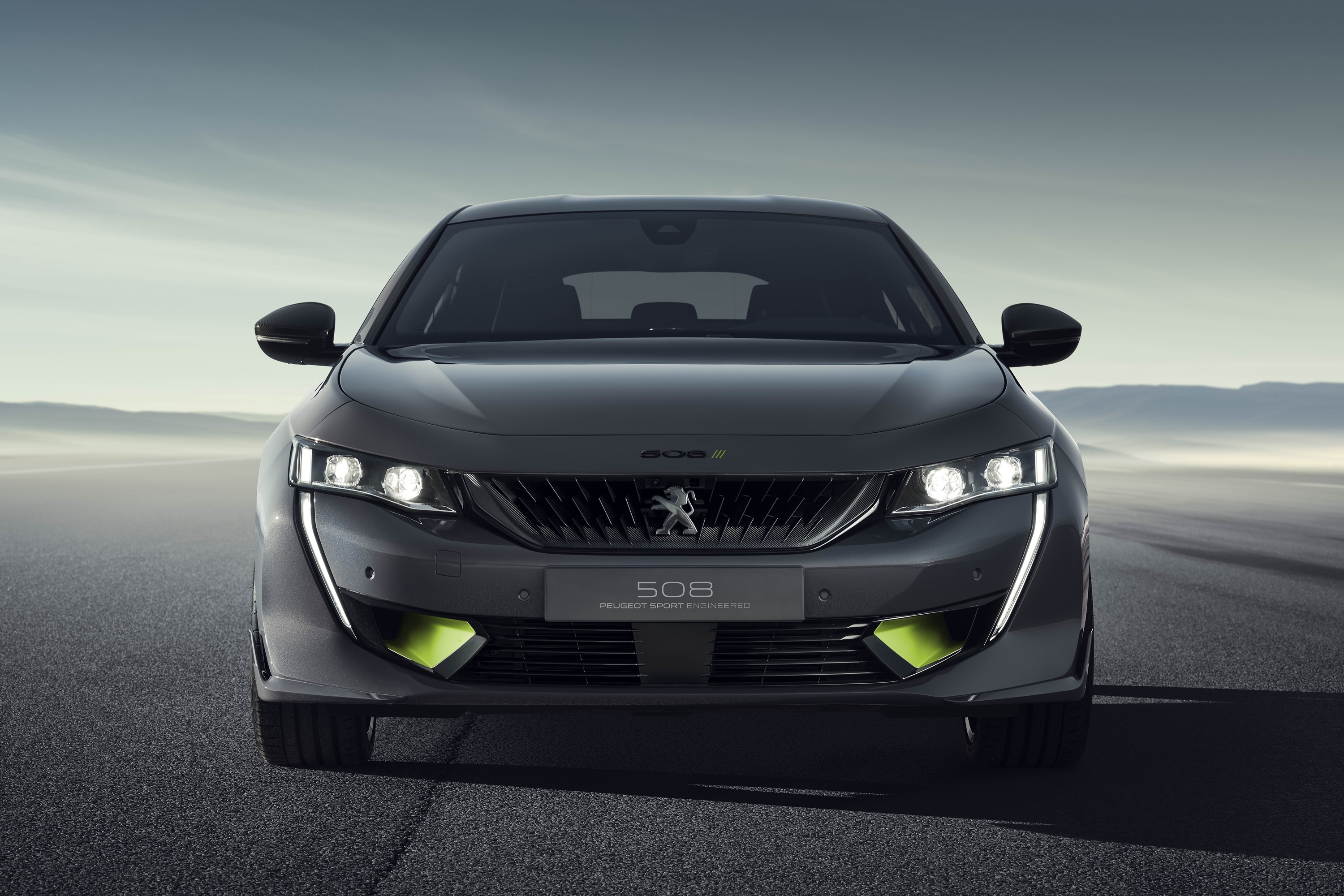 With a rich sporting heritage including the 908 HDI FAP and 3008 DKR, which triumphed in the Le Mans 24-hour race and Dakar Rally respectively, Peugeot Sport is able to tap into a legacy of proven performance cars to inspire the engineering behind the 508 Peugeot Sport engineered concept.

Tying in with PEUGEOT’s #unboringthefuture ambitions, the 508 Peugeot Sport engineered concept will be unveiled at the 2019 Geneva International Motor Show.

PEUGEOT’s GT and GTi lines already provide top performance levels, as will the HYBRID andHYBRID4 in the near future. The Concept 508 Peugeot Sport engineered goes even further.

It is a prelude to the development of a new range of compelling electric vehicles.

With this strategy, Peugeot demonstrates that electric is the source of smart neo-performance levels, uniting power and efficiency.

Peugeot Sport, world-renowned for its sports model design, was given the task of developing this new model line.

Of course, Peugeot Sport is celebrated worldwide in top-level international circles and by competition clients, notably for 908 and 3008 DKR, which were triumphant in the Le Mans 24-hour race and the Dakar rally, and their renown extends to 208 R2, 308 Racing-Cup and 308 TCR.

The Concept 508 Peugeot Sport engineered leverages these achievements but also features the latest advances in technology to provide not only efficiency but unparalleled panache! 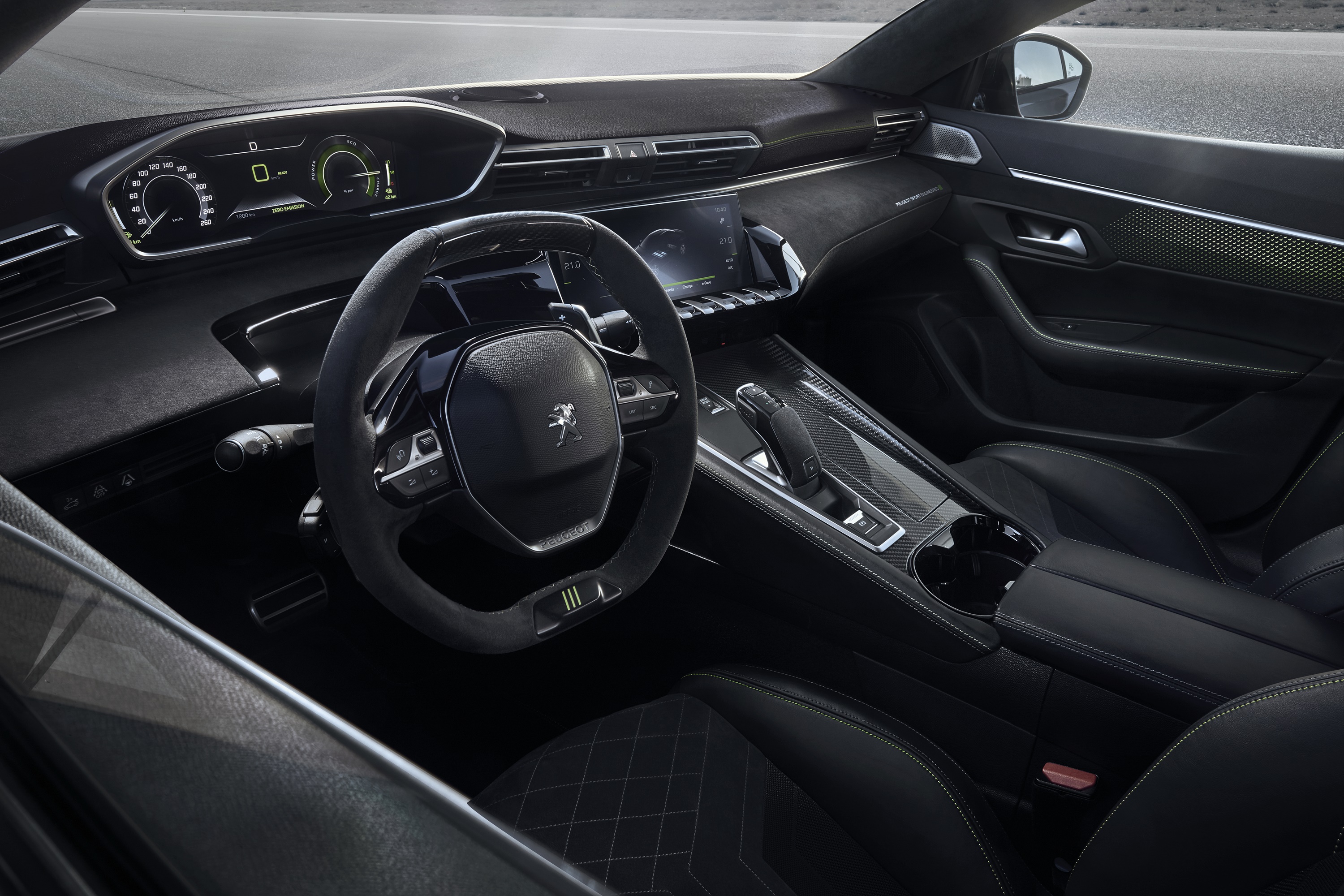 The Peugeot Sport engineers have united the potency of three engines (a PureTech 200, an 110bhp electric engine at the front and a 200bhp engine at the rear), two power sources and four-wheel drive to provide spectacular in-gear acceleration, developing a maximum torque of 500 Nm. These characteristics place the Concept 508 Peugeot Sport engineered on an equal footing with a 400 bhp ICE vehicle.

New Peugeot 508’s exceptional chassis has been specifically modified to lower the vehicle body height, include new damping laws and to widen the front track by 24 mm, the rear track by 12 mm. The precision steering has also been improved to provide extra efficiency and heightened pleasure at the wheel.

High-performance tyres were selected from the range of our partner, Michelin. The Concept 508 Peugeot Sport engineered 245/35 R20 Pilot Sport 4S tyres, chosen for their ultra-grip that pushes out performance limits.

“Electrification has enabled us to develop the sportiest line ever seen at PEUGEOT! We dreamed of doing it and now we have realised our dream.” Said Bruno Famin, Peugeot Sport CEO

The best of both worlds

The Concept 508 Peugeot Sport engineered fits perfectly into the ethos of this new line of high-class electric vehicles and opens up a whole new world of driving experiences.

Without any compromise on performance, all the advantages of a plug-in hybrid vehicle are on offer. The battery (11,8kWh) deliver real fuel efficiency and 100% electric mode up to 50km (WLTP).

In Sport mode, thermal and electric power sources can be aggregated up to 190km/h, providing impressive in-gear acceleration in all conditions!

Incredible driveability but with a new, more stringent standard in CO2 emissions.

This concept car heralds a new, high degree of agility and lays the foundations for a new expression of electric performance with a Peugeot Sport signature.

The design is enhanced by the special “Selenium Grey” body colour, which changes according to the light, thanks to the fine opalescent particles contained in the paint.

In addition to their dynamic design, the new 20″ alloy wheel rims allow for improved brake cooling. The engraved finish is an elegant and sporty blend of onyx black and selenium grey. The wheel bolt covers are star-shaped, fully hiding the wheel bolts and providing unprecedented attention to detail. The wheel rims allow a glimpse of the PEUGEOT SPORT ENGINEERED signature on the brake callipers which also sport the kryptonite colour code.

The chrome features now appear more assertive with their gloss black colour and the iconic Lion and the monograms sport the same anodised surface finish as on the recent PEUGEOT e-Legend Concept car.

Epitomising timeless sportiness, the door mirror shells are made of carbon fibre. 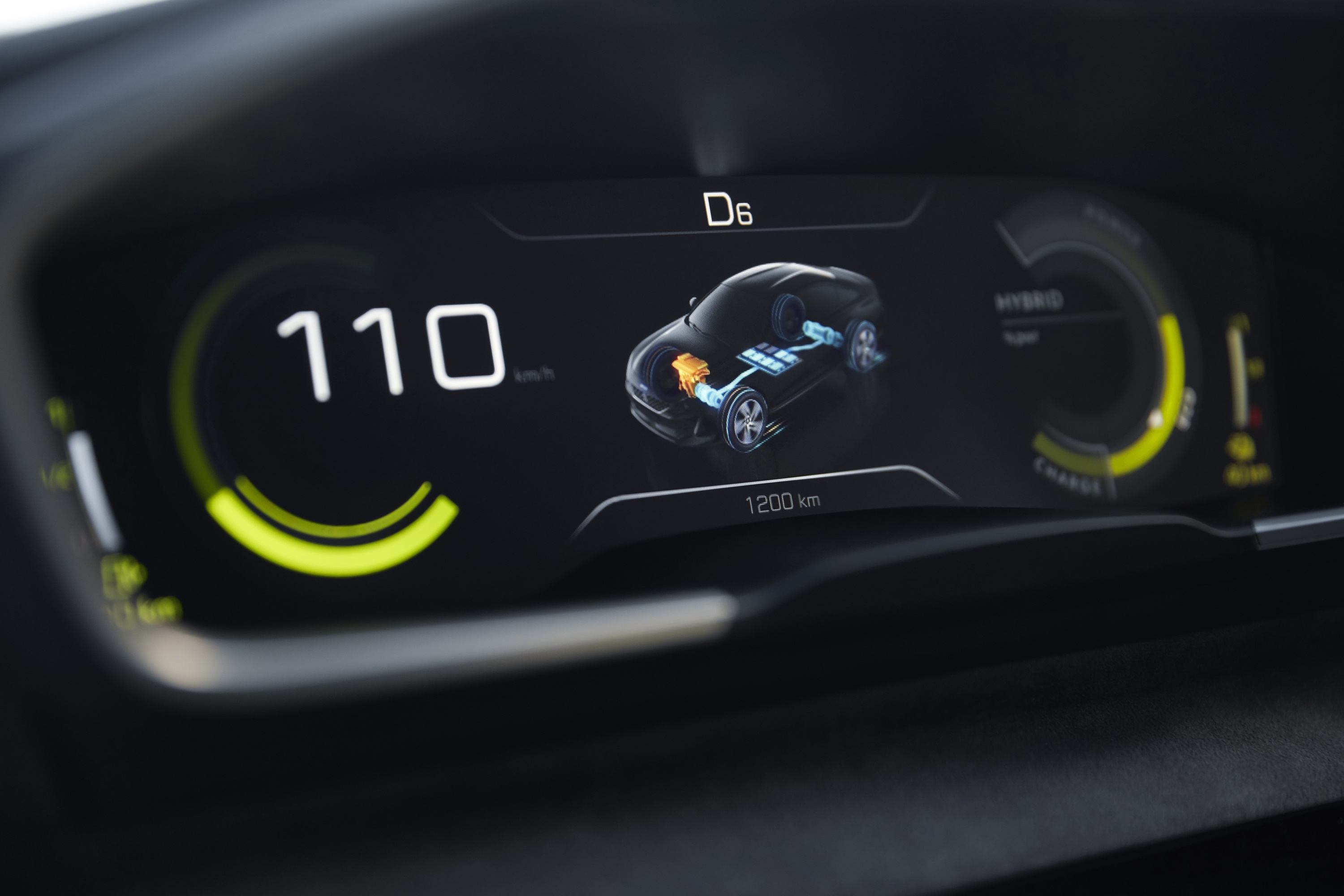 More than ever, the PEUGEOT i-Cockpit® is dedicated to performance and an intuitive driving experience – the compact steering wheel only adds to the vehicle’s agility and the head-up instrument panel allows the driver to have a clear view of the road and to have 100% concentration.

The new “comfort-fit” seats come with leather and Alcantara® upholstery with Kryptonite and Onyx Black overstitching. Every component in the passenger compartment has been specially shaped: the roof, the windscreen uprights, the doors and the quarter panels, which are Alcantara®-covered.

The sporty asymmetrical steering wheel is still featured, but it is now covered in Alcantara® combined with carbon fibre inserts. The lower section is completed with an insert featuring the 3 PEUGEOT SPORT ENGINEERED lines and alternating Kryptonite and Onyx Black overstitching. To provide a new sensory and visual experience, the touch-sensitive gear lever also includes an Alcantara® section.

The door-frames are equally covered in this beautiful material and contain perforations revealing Kryptonite recesses that fade to form a uniform band on the dashboard, the top of which is overstitched in Kryptonite. The central console is elegantly clothed in carbon fibre to emphasise the vehicle’s dynamic personality.

Total immersion is guaranteed with the 100% Kryptonite 10″ capacitive HD touch screen and the 12.3″ head-up digital pad.

No detail has been spared – there is even a subtle touch of Kryptonite on the inside of the door handles.

Kia Stinger is certainly worth the money. The 200S handles superbly. Ride is excellent and handling is sporty, yet comfortable. Although the 3.3 6 cylinder is brilliant, the 2.0L is a good all-rounder. [Read More]

On test this week we had the opportunity to drive the somewhat sporty 1.2 e-THP Active Hatch. Peugeots are known for their quirks but the 208 has tamed these to provide a value based spritely 5 door hatch that provides comfort, style, safety and plenty of competition for the segment leaders. [Read More]

Peugeot 3008 has been redesigned. Lets look at the inside. Oo-la-la. Monsieur le designer has gone berserk. Let’s start with the dash, the most striking feature of the cabin. It is gorgeous. [Read More]