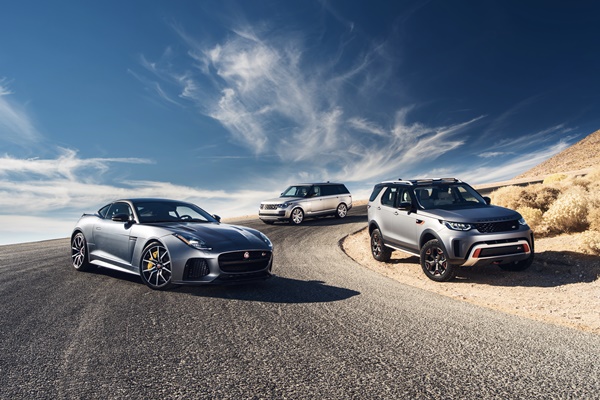 For the first time ever in North America, Land Rover Special Vehicle Operations (SVO) presented vehicles in each of its three unique categories (SVAutobiography, SVX and SVR) with the debut of the new

John Edwards, Managing Director of Jaguar Land Rover Special Vehicle Operations, said, “SVO creates vehicles of distinction. Special versions of Jaguar and Land Rover vehicles that amplify characteristics of luxury, capability and performance. Our clients love the breadth of opportunities to own one a vehicle design, engineered and by SVO which also meets their precise lifestyle requirements.”

“SVO creates three distinct categories of special vehicles. SVAutobiography is the of peerless luxury, SVX is our new brand dedicated to all-action, all-terrain and SVR is the sign of thrilling performance in and Land Rover vehicles. We are proud to present a of exciting vehicles from SVO together in North America for the first time.”

With the Global Debut of the 2018 Range Rover SVAutobiography, Land Rover an unprecedented luxury SUV. The new flagship model combines peerless and technology, including rear doors that close at the touch of a button, executive class seating capable of up 40 degrees of recline and a fully refrigerated compartment with space for two 750ml bottles and two glasses.

Also making its North American debut, the 2018 Range Rover Sport SVR, is the fastest Land Rover ever produced and merges all-terrain capability with extreme power and advanced traction technology. The Range Rover Sport SVR features a 423kW supercharged 5.0L V8 engine. The 2018MY Range Rover and Range Rover Sport lineup was shown for the first time at the event with new interior and exterior design and features.

The North American debut of the Land Rover Discovery SVX adds the extremecapability offering to Special Vehicle Operations. The ultimate Discovery for off-road enthusiasts, the Discovery SVX delivers the unmatched Land Rover capability in a dynamic and distinctive manner without compromising comfort and practicality.

Showing the Jaguar SVO capabilities, the Jaguar F-TYPE SVR and Jaguar XE SV Project 8 were also showcased at the event, with the Project 8 announced tonight as the world’s fastest four-door sedan, following a production-intent prototype’s record lap of the Nürburgring Nordschleife.

Ian Callum, Jaguar Design Director said, “Jaguar is a performance brand and the F-TYPE SVR and XE SV Project 8 are two of the most powerful Jaguar vehicles that we’ve ever produced – and with the Nürburgring record we’re proud to have the fastest sedan in the world! Working with our Special Vehicle Operations team, we’re able to turn up the performance of our Jaguar vehicles to another level.”

Building on the Jaguar heritage in performance and racing, racing legend Bobby Rahal was recognized at the event with his team – Rahal Letterman Lanigan Racing – announced as the first to join the Jaguar I-PACE eTROPHY electric race series, the world’s first international championship for production-based electric cars. The racecars, which will be built by Jaguar Land Rover Special Vehicle Operations beginning in 2018, will give competitors a chance to showcase their talent while racing on the world stage alongside the 2018/19 global FIA Formula E championship.

With a newly-launched Airstream 684 Series 2 aluminium travel trailer hitched to its electrically-deployable tow bar, a Range Rover Autobiography with the 250kW SDV8 engine was chosen for the challenge “ to drive from Airstream’s European home in the English Lake District, to the top of the Atlas Mountains in Morocco – and back¦ [Read More]