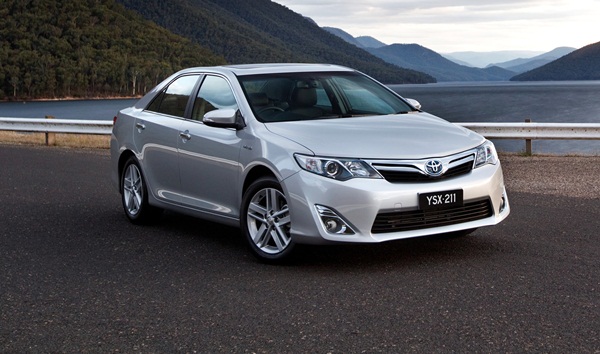 The hybrid sedans deliver a power surge of 7.8 per cent over their predecessors, with a fuel-economy improvement of up to 17 per cent* on the city cycle.

“Our flagship hybrid sedan is in a class of its own, with an unrivalled combination of spirited power and seamless acceleration while using substantially less fuel.

“We expect all these benefits – in addition to the noticeable enhancements to styling, dynamics and value – to increase sales of Camry Hybrid in Australia.”

The system’s combined output has been lifted to 151kW (from 140kW) with power varied between the petrol engine and electric motor, or combined as needed.

The new 2.5-litre engine, like the 2.4-litre it replaces, uses the Atkinson cycle to achieve maximum efficiency while producing more power and torque than the previous engine.

Exclusive exterior and interior designs and badges differentiate the Camry Hybrid from other Camry models.

An exclusive radiator grille with a chrome upper section and a “hybrid blue” Toyota badge is flanked by headlights with blue-accented extensions.

The rear design expresses a solid stance and a wide feel, featuring the hybrid blue Toyota badge and, for the HL grade, a bootlid spoiler and chrome garnish.

Inside, there are refined touches with attention to detail, including soft-touch padding, quality stitching and a three-dial Optitron instrument panel with chrome-accented outer rings and metallic-blue meter gradations.

A comprehensive safety package includes stability and traction control, anti-lock brakes with brake assist and a reversing camera with the image displayed on a 6.1-inch touch-screen.

There are now seven airbags with the addition of a driver’s knee airbag plus seatbelt indicators for all five occupants.

Camry Hybrid is even quieter than the petrol models with new sound-absorbing materials in the engine compartment in addition to its acoustic windscreen.

Its more compact size, along with moving the DC/DC converter to the engine bay, results in a boot that is more than eight-per-cent larger than in the current-generation car.

The new model has been engineered with a towing capacity of 300kg+ – enough to provide owners with the flexibility to tow a small trailer.

Depending on the battery’s state of charge and certain other factors, EV drive mode may allow the driver to operate the car on the electric motor alone for up to 2km at lower speeds (below approximately 45km/h).

The hybrid-exclusive instrument cluster has features that help the driver to operate the car as economically as possible.

Instantaneous fuel economy is shown with LEDs (light-emitting diodes) around the outside of the average fuel-economy gauge.

Applying the brake converts the motor to a generator that captures the kinetic energy from the wheels, storing it in the hybrid battery pack.

New hill-start assist control helps prevent the vehicle from rolling backwards when starting off on an incline when the brake pedal is released.

New Camry Hybrid is covered by Toyota Service Advantage with the cost of services capped at $130 for each of up to five services in the first four years or 75,000km^(whichever comes first) – identical to the petrol Camry range.

Toyota to crack one million hybrid vehicles in 2012

Toyota is on track to sell one million hybrid vehicles in a calendar year worldwide for the first time. A record 630,048 Toyota and Lexus petrol-electric hybrids were purchased worldwide in the six months to June 30 – more than the total of 628,989 hybrids sold during the whole of last year. [Read More]

Toyota’s 2011 Hybrid Camry is continuing the green push at Toyota. Is the Hybrid Camry Luxury a worthwhile alternative for a family car? [Read More]