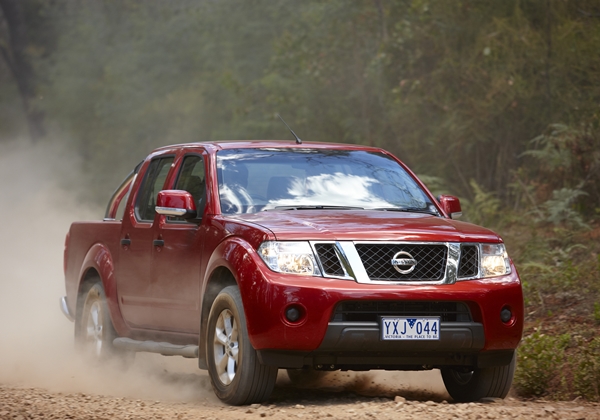 Hot on the heels of the expanded 2012 Navara D40 range, Nissan will introduce a new 2WD ST Dual Cab Diesel model as well as specification upgrades across the entry-level Navara RX range.
The arrival of the 2WD ST Dual Cab from early April will further enhance Nissan’s penetration of the 2WD Dual Cab Diesel segment, which has been growing three per cent year-on-year.
Built in Spain, the 2WD ST Dual Cab Series 6 Navara will have more power, torque, comfort, convenience and style than the 2WD RX model.
With its 2.5 litre YDk3 turbo diesel producing 120kW/403Nm, it gains 14kW and 47Nm over the 2WD Dual Cab RX Diesel, yet it delivers significantly reduced fuel consumption of 8.3l/100km MT compared with the RX MT model’s 9.1l/100km MT.
Upgraded standard equipment over the RX model includes 17-inch alloy wheels (versus 16-inch steel), rear child restraint anchorages, six airbags (front, side & curtain), Dual Zone Climate Control A/C, 60/40 split fold rear seats and side steps.
This is in addition to the 2WD Navara’s existing high specification, which includes remote central locking, power windows, cruise control and a 2,000kg braked towing capacity.
Enhancements to the Thailand-built Series 7 Navara RX Range will also be introduced from April this year.
Series 7 models will feature durable and practical vinyl floor covering for 2012, while body-coloured electric door wing mirrors are now standard across the range.
Nissan’s Senior Model Line Manager Commercial Vehicles, Matt Baily said Navara’s multi-sourcing ability – with models sourced from both Spain and Thailand –was a major strength.
“The new 2WD ST Dual Cab provides even more opportunity for Navara to dominate in the growing Australian PU vehicle segment.”
The Navara 2WD ST, with manual transmission, is priced at $36,100 and automatic transmission option adds $2,250.
Technical and safety upgrades, price cut for 2012 Nissan Patrol
Nissan’s popular Y61 series Patrol Wagon Patrol continues its legendary status for 2012 with a number of significant technical and safety upgrades now incorporated.
Significantly, the entry level DX model is now reduced in price $700.
Vehicle safety has been enhanced with the fitting of Vehicle Dynamic Control (VDC) on all series 8 Patrol Wagons. The system can be de-activated via a console switch for specific conditions, for example deep sand.
Meanwhile traction in difficult terrain has been optimised with the addition of a Rear Diff Lock, which is activated by an in-cabin switch.
In other detail changes:
• A rear glass antenna in lieu of a power antenna is now fitted to ST and Ti models
• The interior styling has been upgraded with the incorporation of chrome surrounds on the dashboard dials
• An engine intercooler cover is fitted to ST and Ti models.
Nissan’s Senior Model Line Manager – SUV, Michael Hill said with the Series 8 changes the 2012 Patrol continued to represent outstanding value in the marketplace.
“The Patrol remains one of Australia’s most capable, and affordable, 4WD’s ideally suited to off road work and recreation,” he said.
“Its proven, live axle suspension gives it high off road durability and places it high on the list of off-road enthusiasts”.
Later this year, Nissan Patrol will celebrate the 50th anniversary of being the first vehicle to cross the Simpson Desert.
“This was a pioneering achievement in 1962 that opened up this remote region to thousands of adventurers since, many of them driving later generation of Patrol models,” said Hill.
The current Y61 Patrol will continue on sale beyond 2012 after Nissan’s new, high-tech, independent suspension Y62 Patrol goes on sale.
Pricing for the 2012 Nissan Patrol range is:
Model Description Series 8 RRP
DX Manual $53,490*
DX Auto $56,490*
ST Manual $56,990*
ST Automatic $59,990*
TI Manual $70,490*
TI Automatic $73,490*
*metallic paint $495 extra