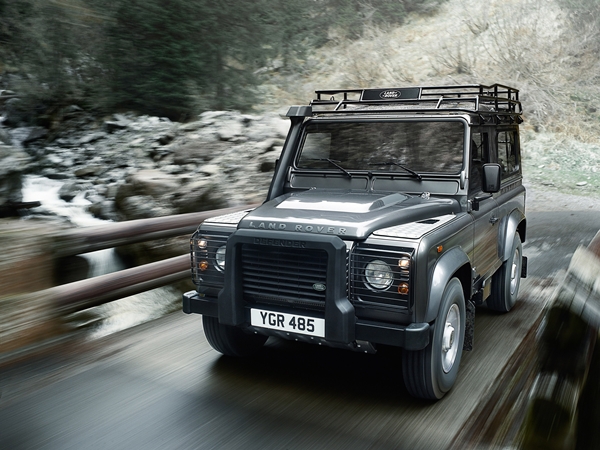 A new 2.2-litre diesel engine replaces the 2.4-litre diesel for 2011, bringing greater levels of refinement to the 2012 Defender. The smaller capacity engine delivers the same power, torque and economy as its outgoing unit.

The Defender can trace its roots back to 1948 and during that period Land Rovers have earned a reputation as the most rugged and versatile off-road vehicles in the world. Since the current model’s introduction in 2007, the Defender has consistently sold an average of 25,000 units a year worldwide. Retail and utility customers, armed forces and NGOs in over 100 countries believe that the Defender’s off-road ability, durability and towing capability are still head and shoulders above the competition. Such a unique combination of attributes explains why this legendary vehicle commands such exceptionally high standards of customer loyalty.

“The substantial improvements to the Defender in 2007 transformed its on-road refinement and comfort whilst extending its legendary capability off-road for which Defender is synonymous.

Despite the smaller capacity, the new engine produces the same power, 90kW@3,500rpm and torque, 360Nm@2,000rpm, as the outgoing 2.4-litre engine. Performance remains similar too, though the top speed has been raised to 145kph compared to 132kph for the previous version. CO2 emissions on the combined cycle are consistent at 266g/km for the 90 and 295g/km for the 110 and 130.

engine torque also helps in-gear acceleration and the tall sixth gear ensures excellent real-world cruising, refinement and fuel economy. Ground gears in both the gearbox and transfer box help contribute to the refinement of the transmission.

The Defender’s facia is based on a single, large moulding supported on a robust steel rail to help eliminate squeaks and rattles. The instruments provide clear, concise information to the driver, and details like all-LED instrument illumination help ensure high standards of reliability. Versatile stowage shelves are conveniently located for both the driver and passenger and two console options are available: a practical open-tray design that keeps contents to hand and a large, lidded design that provides an impressive 14-litres of stowage.

A powerful heating and ventilation system is designed to cope with the most extreme climates and features aluminium plate and fin heat exchangers to deliver impressive performance.

Tall front seats are designed to improve maximum back support and head restraint ergonomics in the most demanding driving conditions and there are robust, supportive second row seats too. 110 Station Wagon and 130 Crew Cab models can comfortably accommodate three occupants on an asymmetrically-split second row seat. A spring-assisted fold mechanism helps when folding the seats for carrying large or awkward loads.

Defender 90 Station Wagon second row occupants benefit from a pair of individual, full-size, forward-facing rear seats. Providing excellent comfort levels, these seats are also available as a third row option on the 110 Station Wagon. Accessed either through the rear door or by folding the second row seats, they can be easily folded and stowed sideways in the loadspace.

Seat trims include durable all-vinyl and cloth specifications; a half-leather option is also available as an option on all derivatives to add a touch of luxury to the cabin. Three-point safety belts are specified for all seating positions.

Defender’s unique vehicle architecture has been retained for 2012. The 110 single cab chassis has been discontinued at 12MY taking the total number of variants to 8. The chassis frame is available in three different wheelbases 90, 110 and 130.

Final pricing for 2012 Defender will be announced in coming weeks and will be on-sale in Australia from December 2011.