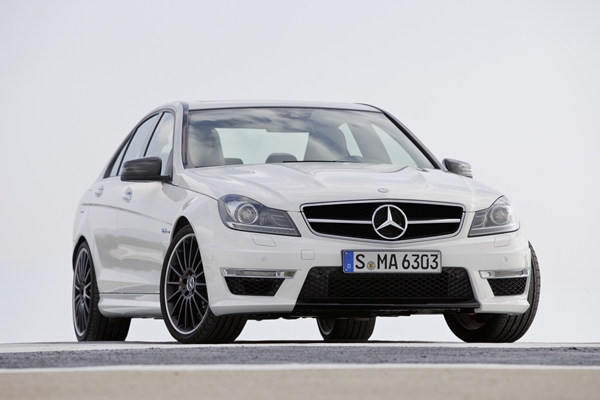 The modified design of the top-of-the-range C-Class model is complemented by numerous enhancements to its technology which deliver even more driving enjoyment while reducing fuel consumption significantly. The introduction of the AMG SPEEDSHIFT MCT 7-speed sports transmission with the “Controlled Efficiency” mode as standard along with a new power steering pump helps to reduce the combined NEDC fuel consumption by about ten percent to 12.0 l/100 km (Estate: 12.3 l/100 km). The output of the AMG 6.3-litre V8 engine is unchanged at 336 kW and can be increased to a maximum of 358 kW with the optional AMG Performance package. Agility, grip and ride comfort have been enhanced as a result of numerous measures to optimise the AMG sports suspension. New assistance systems and a new generation of telematics with internet access increase both safety and comfort.

The latest 2011 generation of the C 63 AMG is now more dynamic and athletic than ever. Thanks to its new radiator grille with a large Mercedes star and a wing-type transverse louvre, as well as a new AMG front apron with a lower cross member painted in high-gloss black, special AMG daytime running lights and side air outlets, the front section recalls the look of the SL 63 AMG high-performance roadster. The new bonnet with its modified powerdomes is now made of aluminium. New clear-lens headlamps emphasise the car’s distinctive, self-confident presence, especially when the optional Intelligent Light System (ILS) is also specified. The wide front wings with the “6.3 AMG” legend and the new 5 twin-spoke AMG light-alloy wheels which are painted in titanium grey and have a high-sheen finish dominate the side view. Good contact with the road is provided by the wide 235/40 R 18 and 255/35 R 18 tyres at front and rear respectively. 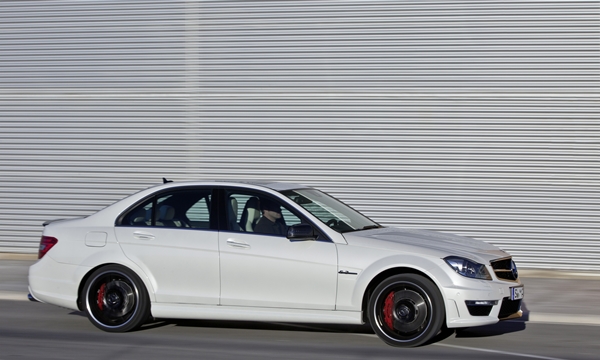 The rear view of the C 63 AMG also evokes the SL 63 AMG: the new AMG rear apron has a distinctive, black diffuser insert with three pronounced diffuser fins. The two chromed twin tailpipes of the AMG sports exhaust system are as pleasing to the ear as they are to the eye.

Under the skin, too, the top C-Class model boasts a wealth of new technology including the AMG SPEEDSHIFT MCT 7-speed sports transmission – another advanced feature adopted from the SL 63 AMG. Rather than using a torque converter, this innovative transmission has a wet start-off clutch which allows it to deliver a much more efficient, agile and direct response. Fuel consumption and emissions have been reduced significantly thanks to the “Controlled Efficiency” mode and a new power steering pump: at 12.0 litres per 100 km (Estate: 12.3 l/100 km) the combined NEDC fuel consumption of the C 63 AMG is 1.4 litres (Estate: 1.3 litres) lower than that of the predecessor model; this represents a reduction in fuel consumption of some ten percent. The CO2 emissions figure is now 280 (Estate: 288) grams per kilometre. Both power variants have identical fuel consumption and emission figures.

The AMG SPEEDSHIFT MCT 7-speed sports transmission impresses with its exceptional flexibility: with four driving modes as well as double-declutching and RACE START functions it is as compatible with a relaxed, fuel-saving driving style as it is with high-speed laps on a closed racing circuit and extremely dynamicovertaking manoeuvres. The Controlled Efficiency “C” mode is programmed to provide early, comfortable upshifts while maintaining the lowest possible engine speed to help the driver keep fuel consumption down. The “S”, “S+” and “M” modes deliver increased agility through fast, responsive gear changes and higher revs. Gear changes in the “S+” and “M” modes take just 100 milliseconds.

The naturally aspirated eight-cylinder engine with its large displacement of 6208 cc develops 336 kW at 6800 rpm and attains a peak torque of 600 newton metres at 5000 rpm. A look at the performance figures confirms that the new C 63 AMG retains its predecessor’s position as the top performing model in its segment: acceleration from standstill to 100 km/h takes just 4.5 seconds (Estate: 4.6 s) while the top speed is 250 km/h (electronically limited).

Performance package: technology transfer from the SLS AMG
Even more dynamic performance is available with the optional AMG Performance package: this offers 358 kW and allows a 0-100 km/h acceleration time of 4.4 seconds (Estate: 4.5 s). The Mercedes-AMG engine experts have achieved this increase in output thanks to a technology transfer from the SLS AMG: the forged pistons, connecting rods and the lightweight crankshaft all come from the gullwing model’s engine. The reduced mass inertia of the components – which are three kilograms lighter than those of the standard version – allows the naturally aspirated eight-cylinder engine to rev up with even greater ease and agility. Models equipped with the performance package can be identified by the variable intake manifold painted in titanium grey under the bonnet, the AMG high-performance braking system with composite front discs and red painted brake calipers all round, the carbon-fibre spoiler lip on the boot lid (Saloon) and the AMG performance steering wheel in nappa leather with an Alcantara® grip area.

The AMG sports suspension with a special front axle, reinforced rear axle and wider track all round has undergone thorough modification; the driver benefits from this in two ways as the C 63 AMG now offers greater driving enjoyment and ride comfort at all times. The new, stiffer elastokinematics, the revised axle kinematics with more negative camber all round and the new rear-axle anti-roll bar with a larger cross-section result in higher agility and greater lateral acceleration. But driving dynamics is not the only area in which progress has been made: new spring and damper rates have optimised both the responsiveness of the suspension as well as the road roar and tyre vibration characteristics.

The AMG speed-sensitive sports steering with a direct ratio (13.5 : 1) has a newly developed power-steering pump which plays a decisive role in reducing the fuel consumption. This is because the power assistance for the steering only requires energy when the driver is actually making steering movements. Reliable deceleration at all times is ensured by the AMG high-performance braking system with internally ventilated and perforated discs all round. 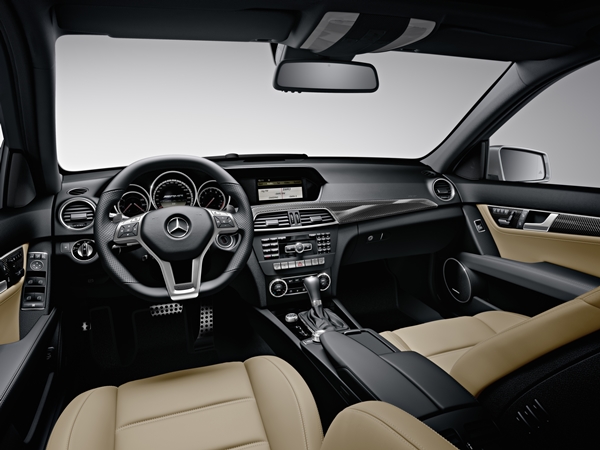 Even a quick glance at the interior of the C 63 AMG reveals the considerable progress which has been made: the completely new dashboard design with an integrated screen impresses with its particularly attractive appearance and the superior quality of the details which immediately bring the new CLS 63 AMG to mind. The quality look and feel meet the highest standards. The new, all-colour, three-dimensional TFT display in the middle of the redesigned speedometer welcomes the driver by showing the AMG logo. The new three-spoke AMG performance steering wheel – another feature adopted from the CLS 63 AMG – which is trimmed in nappa leather and features a metallic trim element has flattened top and bottom sections as well as grip areas which are specially shaped and trimmed in perforated leather for perfect steering control. Aluminium shift
Eleven new driving assistance systems already established in the S-Class and CLS

The C 63 AMG features eleven new driving assistance systems which are already established in the S-Class flagship range and the trend-setting CLS. These assistance systems use the latest radar, camera and sensor technology and are designed to combat common causes of accidents, such as insufficient distance to the vehicle ahead, drowsiness and darkness. They raise the safety standard of the C-Class to a new level by warning the driver of a hazard, or, if necessary, taking active corrective measures.

The top-of-the-range COMAND Online system now provides internet access for the first time. When the car is stationary the customer can browse freely or surf to a Mercedes-Benz Online service whose pages load particularly rapidly. The integrated services include weather information and a local search function as well as the option of downloading a route that has been previously configured on a PC using Google maps and sent to the car. The navigation system of COMAND Online also has added functions. New features include a 3D display with virtual city views. Also new: routes covered can be recorded and repeated later, specific personal destinations can be entered and stored and three alternative routes can be displayed on the screen – one of them a particularly economical variant. 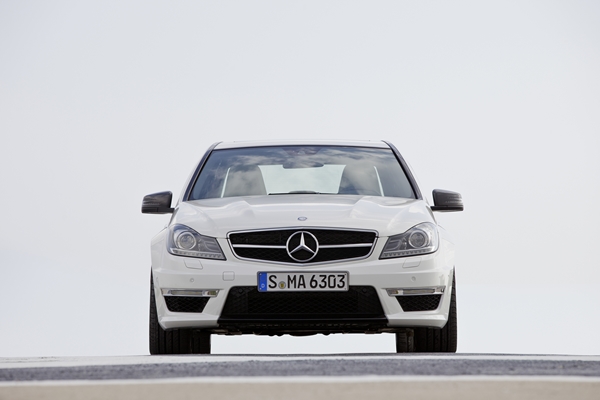 C 63 AMG – fast-track to best-seller status
Launched in summer 2007, the Mercedes-Benz C 63 AMG rapidly established itself as a real best-seller in the AMG model range. Customers all over the world appreciated this unique combination of a powerful and torquey naturally aspirated eight-cylinder engine, a distinctive sound, an agile sports suspension and expressive design. Over the past three and a half years more than 17,000 AMG enthusiasts have chosen the C 63 AMG, 88 percent of them opting for the Saloon (Estate: 12 percent). The AMG Performance package, which has been available since autumn 2009, is proving particularly popular: over 30 percent of all the C 63 AMG models delivered in 2010 were specified with this attractive option