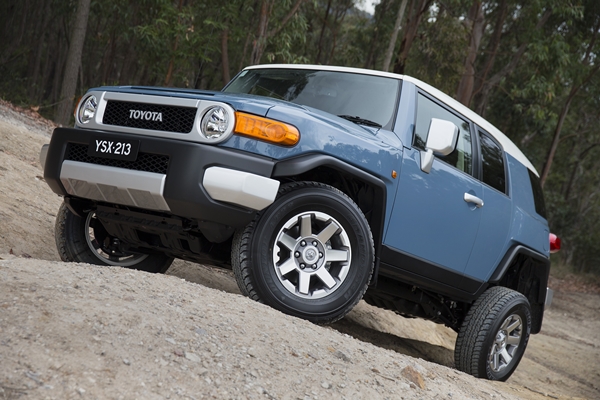 Toyota’s “go anywhere, do anything” FJ Cruiser has conquered yet another summit by posting 10,000 sales in Australia.

Launched in March 2011, FJ Cruiser has taken just four years and four months to reach the sales milestone at an average of 194 a month – almost twice the volume originally forecast for the model.

Engineered for serious off-road driving capability, the FJ Cruiser pays homage to the LandCruiser FJ40 that was sold in Australia during the 1960s, 70s and early 80s.

“Toyota’s FJ Cruiser has developed a passionate following in Australia as the vehicle for having outdoor fun with its retro-inspired design and serious off-road driving performance,” Mr Cramb said.

“FJ Cruiser turns heads because it embraces the compelling styling themes of the original FJ40 in a contemporary way, including angular lines, round headlights and an upright windscreen with three wiper blades,” he said.

“This modern interpretation of the FJ40 is also fun to drive – whether you are taking advantage of its substantial off-road capability or using its practical driving performance for everyday transport,” he said.

Its ride and handling were developed for local conditions by Australian engineers who calibrated the shock absorbers and tuned the power steering for a sporty ride and sharp handling on bitumen while retaining a pliant ride in off-road conditions.

The 31-degree departure angle and 29-degree break-over angle are the best for any vehicle in Toyota’s local 4WD range. Its approach angle of 36 degrees is bettered only by the 70 Series. Ground clearance is 224mm.

FJ Cruiser is powered by a 200kW, 380Nm twin-cam 4.0-litre V6 petrol engine driven through a five-speed automatic transmission. It uses just 11.4 litres/100km* of fuel for a notional range of almost 1,400km from its 159 litres fuel capacity.

The FJ Cruiser is also functional with side access doors that open 90 degrees in clamshell fashion for easy access to the rear seat.

Offered in a single grade with a high level of specification, including 17-inch alloy wheels, the FJ Cruiser is priced from $46,990**. Metallic paint is $550 extra.

FJ Cruiser is covered by Toyota Service Advantage capped-price servicing at a maximum of $220 per service#.

Kia Stonic – It was inevitable that Kia would release a mini SUV given the success it’s had with larger models. Stonic has been around in Europe for about 4 years and only arrived here after the second generation [Read More]