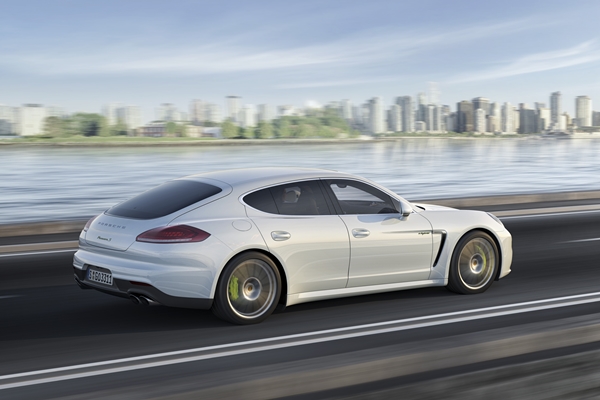 Porsche is celebrating the world premiere of the second generation Gran Turismo at the Auto Shanghai show in China. This leading auto show for the Asian market opens its gates to the public tomorrow. The centrepiece of Porsche’s show appearance is the new Panamera S E-Hybrid, the world’s first plug-in hybrid in the luxury class. Also making their debut – together with this new role model of intelligent interconnection of efficiency, sportiness and comfort – are two luxurious Executive versions for the Panamera S and Panamera 4S which sport an extended wheelbase and a three-litre V6 engine with bi-turbocharging that is a completely new development. With the launch of the new generation, the Panamera range is now increasing to ten individual models that offer an extended range between sportiness and comfort.

Matthias Müller, President and CEO of Dr. Ing. h.c. F. Porsche AG, stressed this: “The Porsche Panamera and China – that is a very special success story. Exactly four years ago, we introduced the first Panamera to a world audience here in Shanghai – and very intentionally here. Because it was clear to us that our Gran Turismo would be precisely the right model for this future market. And we were not mistaken. In 2012, one out of three Panamera cars were delivered to China.” Since then, China has gained in importance and become the second largest Porsche market in the world.

The Panamera S E-Hybrid is a systematically advanced development of the parallel full hybrid, which Porsche introduced to the market as a pioneer in the field. With 416 hp (306 kW) of system power, acceleration from a standstill to 100 km/h in 5.5 seconds and a top speed of 270 km/h, it is a Porsche Gran Turismo through and through. Its special fascination comes from its unique efficiency and its ability to drive considerable distances in all-electric mode. In the NEDC, the Panamera S E-Hybrid consumes 3.1 l/100 km, which equates to 71 g/km CO2 emissions.

The electric driving range of the Panamera S E-Hybrid was determined to be 36 kilometres in the NEDC, and its top speed in electric driving is an unrivalled 135 km/h. The electricity is stored in a newly developed lithium-ion battery with a 9.4 kWh energy capacity. Depending on the type of external electrical supply, the battery may be fully charged within as little as a few hours, and the battery is recharged by electrical system recuperation while driving. The forward-looking concept of the Panamera S E Hybrid also includes a completely new range of convenience functions that can also be activated and accessed by a smartphone app. 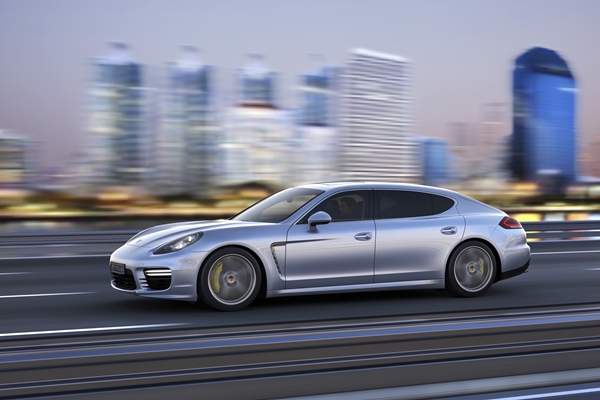 In a second world premiere, Porsche President and CEO Matthias Müller presented the Executive models of the Panamera which have a 15 centimetre longer wheelbase, and as a result more leg space behind the front seats. Panamera 4S Executive and Panamera Turbo Executive offer a very extensive set of features, and the standard rear seats already offer exceptional comfort. All Executive models have the innovative Panamera air suspension, which combines excellent ride comfort with typical Porsche handling properties. Never before have luxury and comfort been so closely associated with such sporty driving performance.

Representing another step towards increasing performance and efficiency is the completely reengineered V6 bi-turbo engine with three litres of engine displacement, which is replacing the previous V8 engine of Panamera S and Panamera 4S in the new Gran Turismo. The engine’s key parameters are indicators of progress: 20 hp more power and 20 Newton metres more torque, but up to 18 per cent improved fuel economy compared to the V8 engine in the previous model.

The new Panamera underscores its exceptional positioning with an even more expressive design language in the style of the new generation of Porsche sports cars, which are marked by tauter lines, more powerful contours and newly designed body elements.

Aston Martin DBX – Bentley has the Bentayga, Rolls Royce the Cullinan, Lamborghini the Urus, Maserati the Levante and now Aston Martin is close to releasing their SUV. [Read More]

Jaguar has updated its luxurious XJ for 2014. The MY14 XJ focuses enhancements on the rear passengers with upgraded seats and entertainment.. The Jaguar XJ also has upgraded technology and incorporates bespoke chassis and aerodynamic developments. [Read More]