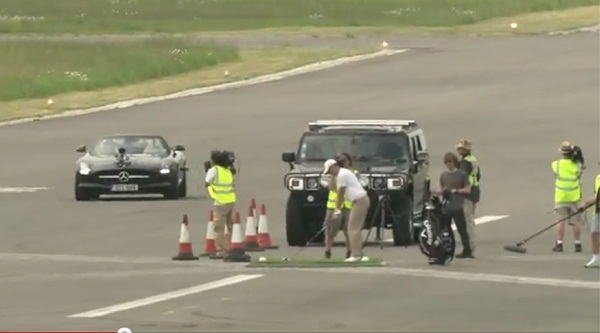 The absolute skill of Formula 1™ legend and DTM driver David Coulthard, behind the wheel of the awesome 420 kW SLS AMG Roadster, provided the ultimate ‘did that really happen?’ moment for Mercedes-Benz United Kingdom.

Captured on film, the SLS AMG Roadster landed the record of ‘farthest golf shot to be caught in a moving car, ever’. Professional golfer Jake Shepherd hit a golf ball at 286kph into the Mercedes-Benz supercar, which was moving at a rate of 193kph when it caught the ball 275 meters away from the tee.

The extraordinary film shows the exact moment when David Coulthard caught the speeding golf ball between the seats of the SLS AMG Roadster. Speaking about the astonishing catch, Coulthard said: “The only way to track the ball was to keep your eyes on it all the time: it’s a real adrenaline rush but it’s not the most comfortable thing to do because for a moment, you’re not watching the road!” He continued: “I was as happy as I’ve ever been winning a Grand Prix because I was so surprised quite frankly that it went in, and went in so solidly!”

The amazing feat was not only caught on camera, but also independently verified by a Guinness World Record adjudicator who confirmed the unbelievable achievement secured the title of farthest golf shot caught in a moving car.

The SLS AMG Roadster has a (electronically limited) top speed of 317kph.

The Bathurst 12 Hour remained a narrow decision until the very end. The two leading cars remained in the same lap and the time difference with which they crossed the finish line was only 1.13 minutes [Read More]

The design of the SLS AMG Roadster stirs the emotions. Whether with the soft top open or closed, the Roadster exudes passionate sportiness and sheer exclusivity. The new super-sports car reinterprets the breathtaking lines of the iconic Mercedes-Benz 300 SL Roadster from the 1950s, and continues the legend of exciting sports cars bearing the Mercedes star. [Read More]