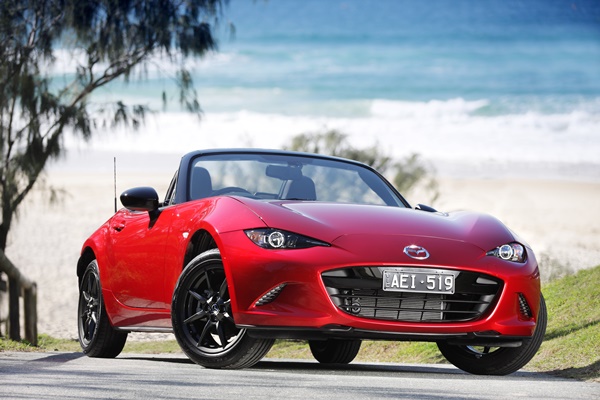 More than 25 years ago, the world was introduced to a new breed of sportscar when the MX-5 was unveiled; today the All-New Mazda MX-5 arrives in Australia and is expected to entice a new generation of buyers and excite long-time fans.

Available in two grades including the Roadster and the high-spec Roadster GT, the All-New Mazda MX-5 will offer two powertrains and two transmission types.

Launching with a 1.5 litre SKYACTIV-G petrol engine which outputs 96kW of power and 150Nm of torque, the MX-5 comes with either a 6-speed SKYACTIV-MT manual or a 6-speed automatic transmission.

With fuel economy figures that have improved by almost 25 per cent compared to its predecessor, the 1.5 litre with 6-speed SKYACTIV-MT manual transmission sips from as little as 6.1L/100km while the automatic records a lean 6.4L/100km.

Weighing in from 1,009kg, the ND is over 90kg lighter compared to the previous NC model and a new suspension system improves turn-in ability, stability when braking and control when cornering. A newly designed soft top makes it easy to open and close the roof in seconds, while Mazda-first double pinion electronic power steering is introduced to All-New MX-5.

Available in six striking colours, including the popular Soul Red and the recently introduced Ceramic Metallic, the range comes with three interior trims, including black cloth for the Roadster and a choice of black or tan leather in Roadster GT.

A 2.0 litre SKYACTIV-G petrol alternative, with 118kW of power and 200Nm of torque, will go on sale later this year.

* Plus on road costs

The BT 50 has been a success for Mazda in sales and is an important part of their range. It looks are more subtle than some others but especially the GT is packed with features has a well combined engine and transmission, [Read More]