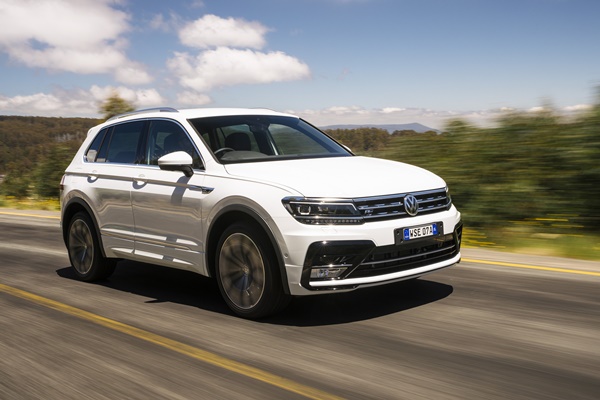 VW Tiguan continues to be a success story for VW. The handsome mid-size SUV is Capable of light off-road, and light towing work. The cabin is spacious and has a premium feel. VW has really lifted its game in all respects.

I drove the top Highline model complete with the R-Line package. It has big 20” wheels, a powerful engine, and a look that is a little squarer and more aggressive than before.

It is handsome, masculine, and modern. You might need different wheels for serious fun. It’s Tonka-toy exterior is further accentuated by hi-tech LED headlights that look like ice cubes in a G & T. Around the back the LED story continues. There are several groups of LEDs.

The top line of LEDs remains steadily lit while the engine is on. The bottom two horizontal pairs turn vertical, and become more intense when the brake applied. It is eye-catching the first time you see it. Roof rails can take an optional travel pod should you fill the boot with your unbridled enthusiasm.

The R-Line package, brings some extra goodies to the Highline. There are soft Vienna leather seats which have R-Line stitched into them. In fact, R-Line garnishes have been lavished on every available surface, inside and out.

The latest incarnation of the VW infotainment system has Apple CarPlay and Android Auto. All models get an 8” touch screen, with the top 2 models getting voice control for Satnav and audio operations. Many users don’t know they can use “Hey Siri” to perform tasks completely hands free. 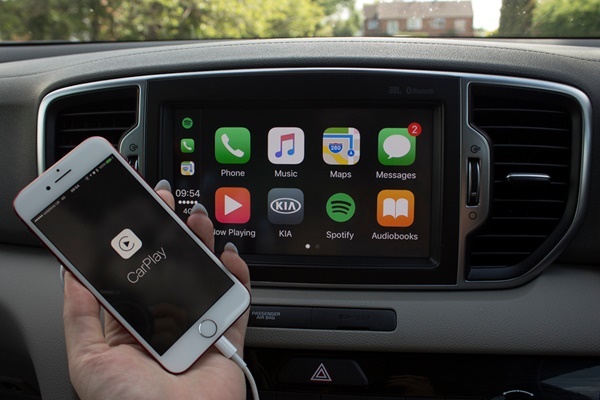 For example, you don’t need to press the voice button to play music, or make a call. More importantly, messaging is also completely handsfree. Pressing then releasing the voice button activates the car’s voice controls, pressing and holding will activate Siri instead.

I view Siri as the greatest safety feature since the seat belt. Many accidents have been caused by inattention. You can switch from CarPlay back to the car’s system anytime.

The infotainment menu auto-bar hides when not in use. It gives the user more real estate for viewing maps, radio stations, and other functions. This is carried over from previous units. The sound is rich and dark. It makes an already-elegant cabin even moodier. 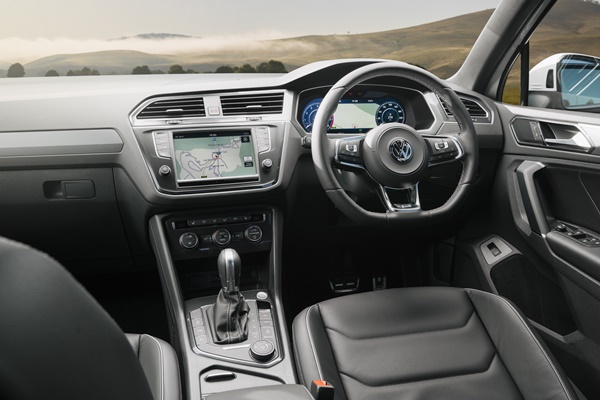 It looks particularly enchanting after dark. All materials feel soft and expensive, including the plastics. All Knobs, buttons, and levers, have a slight resistance to their smooth operation. You usually only expect from cars that cost the GDP of a small African nation.

The soft grip rim on the climate control dials give an impression that thought has gone into their design. Not only is attractive, but it feels good to touch.

The R-Line casts almost $57,000, but the same care and quality goes in to the base Trendline.

The Highline has a “running clearance” of 200mm, that gives you a good deal of leeway over uncooperative landscapes. The cargo hold has 615L worth of space for your bags too. This expands greatly with rear seats that fold almost completely flat.

The space then becomes very useful. The Active Cruise Control (ACC) keeps an eye on the road ahead. It slows you down when the traffic slows down, all the way to stop. When the traffic moves off, you either hit the “Resume” button, or blip the accelerator to get going again.

Tiguan has a “virtual dashboard”. All driver’s dials have been replaced by a single 12” LCD wide-view screen. Steering wheel buttons allow you to scroll through the driver’s LCD menu. You can even display the SatNav there.

The speedo and tacho shrink in size when the map is displayed. There is a digital speedo too. The electric rear door isn’t exactly unusual today, but it makes things much easier none the less. 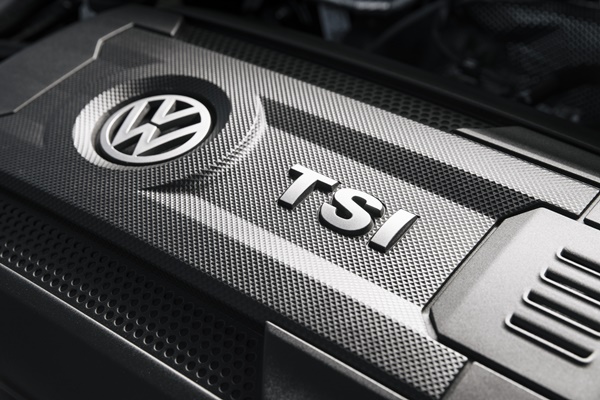 There is a 7 speed DSG in the Highline, or a 6 speed manual/7speed DSG in the base model. The Golf GTI engine has been shoehorned in for added zap. A 0-100 time of 6.5 seconds means the Tiguan is every bit a hot hatch. 8.1L/100k for the petrol engine is quite good given what SUVs did only a few years ago.

Steering is very light. It varies depending on chassis setting, which also alters the dampers. Handling becomes sports-like when in sports mode. The road manners are as impeccable as the immaculate cabin. 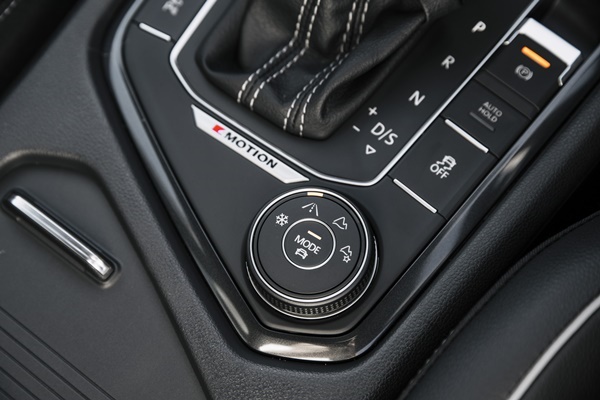 The ride is superb. It gets firmer of course, the second you enter sports mode. However, even in the hardest setting, the suspension won’t be uncomfortable as it tackles cobbles. The driving position is high-set, and you sit upright to. 4 adults fitted with room to spare.

The 4motion AWD shuffles power to give the best grip. while the chassis control adjusts the dampers up to 1,000 times a second. You can feel the weight of the Tiguan make a controlled shift as you enter corners. 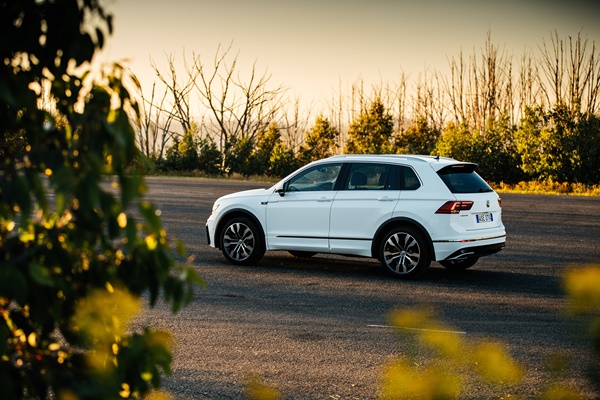 There is all the usual safety gear, including AEB. From next year, AEB will be required on the base models of cars to get a 5-star safety rating. Automated parking lets the system does it for you.  Press the parking button, and the car searches for a spot. You indicate if you want to park on the driver’s side, otherwise it parks on the passenger’s side.

Then, all you have to do is follow directions by shifting in to D or R. You control the speed, but the steering is done by the computer, and it is very good at it. The sensors know exactly where the obstacles are.

The reversing camera is high quality too. The lines show where you’re going, and how close you can get to an obstacle and still be able to open the tailgate.

The off-roading capabilities are greatly enhanced by the addition of extra settings. They’re controlled by a console-mounted control dial, which also houses the variable chassis controls. I have it on good authority that the off-road settings make a decent fist of light cross-country work.

You probably won’t want to tow much, but for those rare times when you do, hiring a bigger rig is an option.

VW  Tiguan is a pleasure to drive. The sharp lines make it pleasing to look at, and the cabin is a very nice place to be. Although it is pricey, VW have aimed to include a heap of standard features and a premium offering. 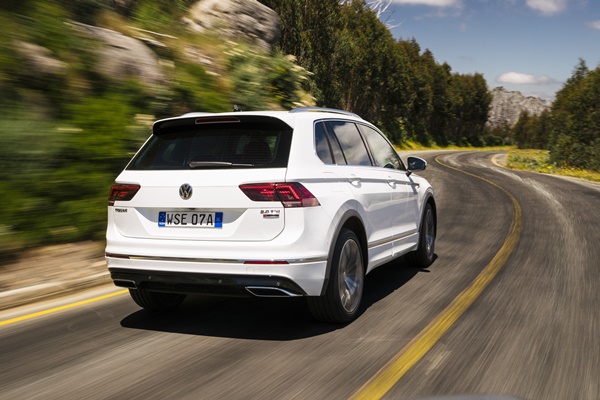 Often when we test drive a car we instinctively decide what we like and what we think needs improvement. Rob Fraser has just handed back a Subaru Outback 2.5i Premium and he tells us what he likes most about it.    [Read More]