The rough and tough Mahindra Pik-Up has benefited from a make-over for 2018 with changes including refreshed styling and some interior improvements too.

For those looking for a work vehicle that stands out from the crowd, and won’t break the bank, this is a vehicle worthy of consideration.

Back in the early days of Mahindra in Australia I had a dual-cab Pik-Up as a long-term test vehicle and so it was nice to again take a look at the Indian-built offering.

Over the seven or eight years between that vehicle and the 2018 vehicle there has been some changes.

The thing that stands out to me the most however is how much quieter the engine is and well soundproofed the cabin is today, in fact, you certainly couldn’t take any points off the Mahindra on its cabin insulation.

OK, the 2018 Mahindra Pik-Up was never designed to win any beauty contests, though the new-look front is an improvement.

I would say the single-cab unit remains the more attractive of the two, especially the cab-chassis version.

You can also boost the look of the Pik-Up with the optional alloy wheels – these replace the steel wheels/plastic wheel covers found on the standard model. 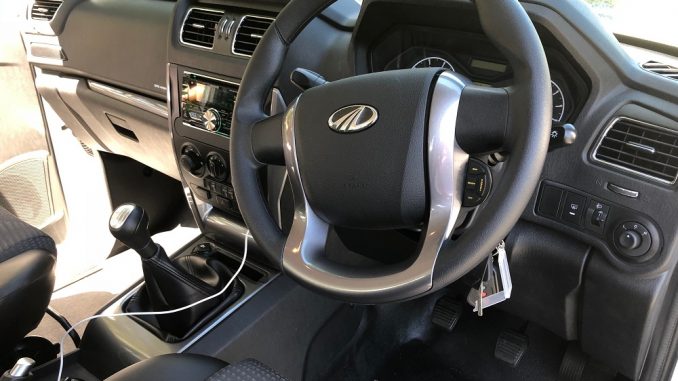 Remembering that this really is a work-focused vehicle, in all, the Mahindra is comfortable enough, despite a few drawbacks.

Some of the good bits inside the cabin include the good visibility, decent legroom up front and in the rear and the simple and easy to read on the go gauges.

All the controls and switches are simple and correctly placed too.

There are good-sized door grab handles, but for the front seat passenger I thought an A-pillar mounted handle would be a nice addition (especially if heading off-road).

The seats are fairly flat and don’t have the largest base and this might leave some larger framed bodies feeling a little under serviced.

The arm rests on the doors a bit hard and combined with a lack of centre arm rests (up front but there are arm rests in the rear) the long-distance touring comfort in the Mahindra might not be great.

There’s a USB point, however in or test car this didn’t want to charge our phone, and a well-placed power outlet on the centre console.

You might also feel let down in the cabin storage area department – the door pockets and glove box are quite small and there’s no centre console bin. 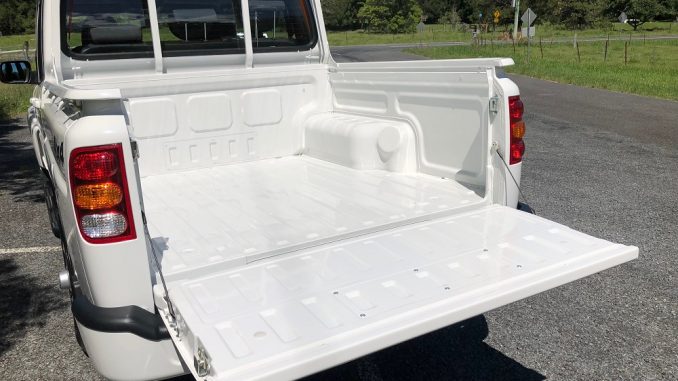 There isn’t a lot in the way of comfort features in the Mahindra Pik-Up though you do get a pretty decent sound system (a Kenwood unit), you get air-conditioning, power windows and mirrors and central locking.

The Mahindra comes with just the one engine on offer – a 103kW/330Nm four-cylinder turbo-diesel unit.

As already mentioned, I found the engine to be a lot quieter than the earlier vehicle I had driven and that is a big plus.

The engine is also really willing with good acceleration even at speed, while my test-drive was without a load in the back there did feel like ample torque on hand to tackle the hills.

The six-speed manual has a fairly light and easy feel when shifting ratios.

I was also impressed with the ride in the Pik-Up, I thought it soaked up the bumps quite well and offered a decent ride despite the somewhat firm overall feel.

The steering though is the weak point, it is quite vague, heavy and gives you less than great feel and feedback from the front wheels.

Couple this with a high centre of gravity and you are unlikely to be throwing the Mahindra around bends like a sports car (as if you would!).

The turning circle is also something to keep in mind as you pilot the Mahindra around – it’s pretty big.

If you’re going to be taking the Mahindra off-road you can be assured that the transfer case and rear diff-lock are top shelf – they are supplied by a couple of the best driveline component suppliers in the business – Borg Warner and Eaton respectively.

The last time the Mahindra was crash tested was in 2012 and it achieved a three-star ANCAP safety rating. 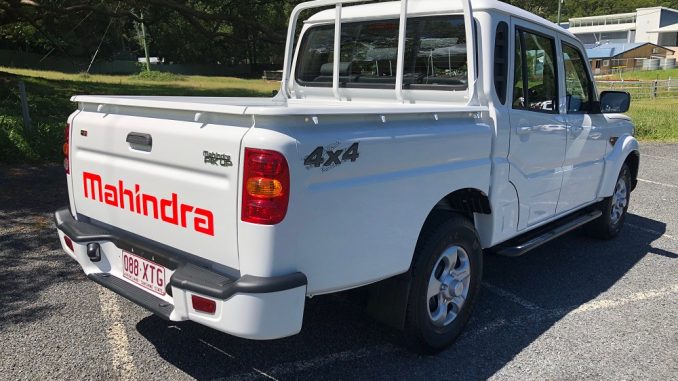 A built for a purpose vehicle, the Mahindra is a long way behind a lot of the Japanese dual-cab utes but is still a proper work truck that is particularly at home in mining and farming type applications.

It’s also acceptably comfortable, spacious for when you bring the big Mahindra into the ‘big smoke’.

The original Mahindra PikUp, launched in Australia in 2007 has been plying the roads and back country of Australia for ten years. [Read More]